Looming trade wars have been the biggest threat to 2018’s bull market.

Even though investors are currently celebrating the Trump North American Free Trade Agreement (NAFTA) deal, the real showdown with China lies ahead.

Yes, the market has had a great year. But it hasn’t been easy. There have been some rough patches related to global trade along the way.

Stocks plunged in early April when China announced tariffs on about 130 U.S. goods, including a 25% penalty slapped on U.S. pork and 15% on fruit.

This was a retaliation against the Trump administration’s tariffs on Chinese steel and aluminum imports.

But investors digested the news and anticipated a swift end to a U.S.-China trade spat.

Since the springtime swoon that ended on April 2, the S&P 500 Index has gained almost 15%.

Investors’ moods have switched from fear of losing to fear of missing out.

The CNNMoney Fear & Greed Index has swung from “extreme fear” to “extreme greed.”

However, the China trade war still hangs in the balance. And a component of Trump’s deal with Mexico targets Chinese auto part manufacturers.

The Trump NAFTA deal with Mexico caps exports to the U.S. at 2.4 million vehicles and $90 billion of auto parts. A tariff of 25% would be imposed on vehicles and parts above that level.

The U.S. also pushed further, demanding that 40% to 45% of auto parts would have to be produced by workers earning at least $16 an hour.

How This Rally Ends in a Crash

These caps and restrictions on auto parts are aimed at China and other low-cost exporters.

Remember, China is willing to dig in its heels on this battle. Beijing has announced a “Made in China 2025” plan to ramp up technology products such as semiconductors, artificial intelligence and robotics.

And as the summer draws to a close, trade officials’ public comment period ends on September 5. Last week’s U.S.-China trade talks ended with no signs of progress.

UBS economists expect the U.S. to impose 10% tariffs on $200 billion in imports. If that happens, we might have a summer rally flanked by a fall swoon.

To find out why, check out my video below: 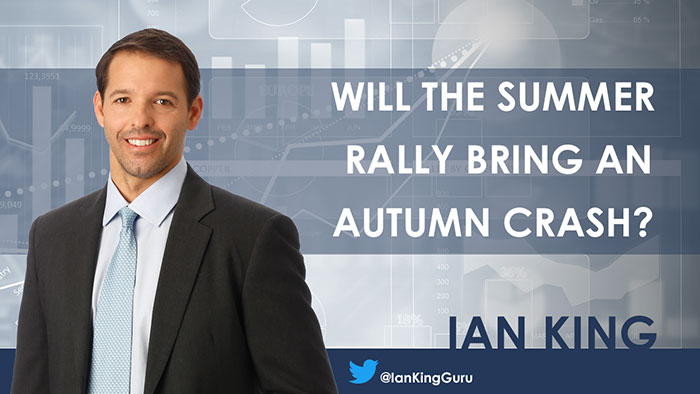 Trump’s Economy: Too Good to Be True?