Home » Economy » Trump’s Economy: Too Good to Be True?

Trump’s Economy: Too Good to Be True?

Right now, there are more people employed than at any point in our history.

In the U.S., there’s a record 157 million people showing up to work. And the unemployment rate is just 3.9%, one of the lowest rates in the last two decades.

That’s something to celebrate about this Labor Day.

Whether your office is closed today or you are at work right now, it’s exciting that so many people are receiving a paycheck.

But many analysts see this as a bad sign.

They say employment is almost too good to be true. And from here, we can expect things to get worse.

They bring up a decent point. It’s the good times that ultimately precede bad times.

So, are the good times over? Let’s take a look at the data…

I have a chart I want to share with you today. It shows the S&P 500 Index and unemployment over the last seven decades. 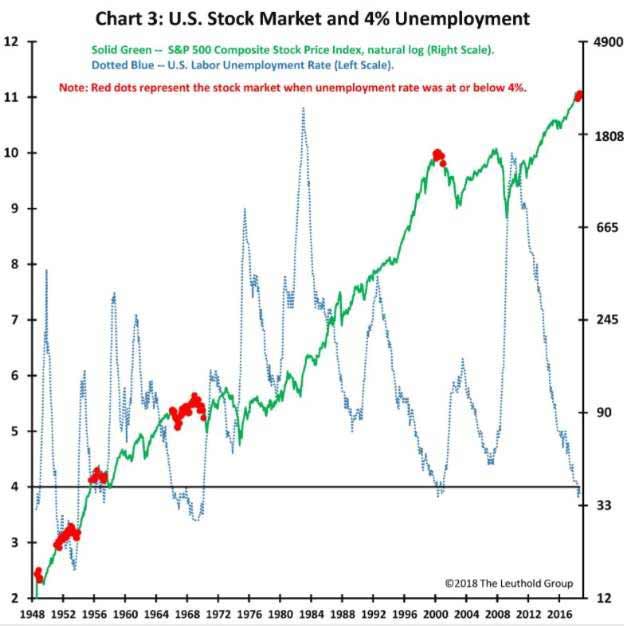 The green line is the S&P 500. The blue line is unemployment.

But notice the red dots on the green line. They note every time unemployment was below 4% — where we sit today.

But it’s not all doom and gloom.

There’s just nothing magical about the 4% level, and unemployment can go much lower than this.

When you look at low unemployment in the mid-‘60s, it stayed below the 4% level for five years.

Back in the early ‘50s, unemployment stayed below 4% for about five years once again.

During this period, the S&P 500 continued to climb.

So just because unemployment is low doesn’t mean it is going to quickly turn around. It can stay low for years, and even fall lower.

Trump’s Stimulus Is Gas on the Fire

The U.S. economy has been steadily climbing for nearly a decade since the Great Recession. The recovery is nearly complete, and we are in the late stages of this bull market cycle.

But this is not the end of our great economic run.

As I mentioned last week, I expect this bull market to continue for at least two years.

And the reason for this is President Donald Trump is looking to boost an already strong economy.

But the president didn’t continue with policies to keep the steady growth going for longer than just a few years.

Instead, he is looking to leave his mark on the office by applying stimulus to an economy that doesn’t really need it.

He cut taxes for individuals and corporations.

He is imposing tariffs, which temporarily boosts our economy.

He is gutting regulations.

These actions will give our economy a major boost in the short-term.

However, it’s this “gas on the fire” that will cause our economy to overshoot its manageable growth rate.

In turn, we are lead down a spiraling path to a recession in just a few years.

For now, though, the market continues to benefit.

So don’t let numbers that may sound too good to be true keep you from benefiting from this short-term rally.

Why September Is a Sluggish Month for Stocks