Traders Are Betting the Fed Is Wrong

Federal Reserve officials expect to raise interest rates three times in 2018. Higher rates are a response to faster economic growth, which the Fed expects in the coming year.

But, at least for now, traders don’t agree with the Fed. In the futures markets, traders are betting with real money that interest rates are going to decline.

Traders can use futures markets to profit from changes in interest rates. If they believe rates will fall, they can buy futures contracts on bonds.

One group of large traders is called the “smart money.” This group is right about major trends more often than not.

Betting on a Decline in Interest Rates

That means a trader can buy $100,000 worth of bonds for less than $1,000. That also means futures are risky, and traders tend to cut losses quickly since a 2% move in the market results in a loss of $2,000, more than twice the amount of money invested in the contract.

Like stock markets, government agencies set the rules of the game. To keep markets fair for all investors, large traders are required to report what they buy and sell. 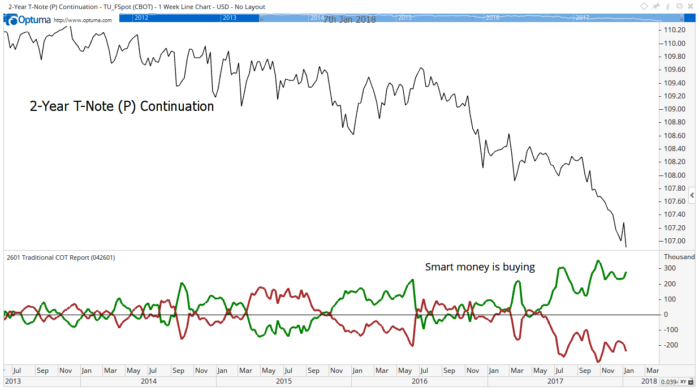 That’s a chart of two-year Treasury notes. The data at the bottom of the chart is the Commitment of Traders (COT) report. It’s published by the Commodity Futures Trading Commission every week.

The COT report details the position of large speculators, which includes hedge funds, small speculators and commercials. The commercials are the large investors that know the market the best. They trade futures contracts as part of their business operations.

The chart shows the number of contracts different groups of traders own. Commercials, including traders working at large investment banks and mortgage companies, are buying the notes. Hedge funds, the red line, are selling.

In the Treasury market, commercials are the companies that lend money or need Treasuries on their balance sheets like insurance companies and banks do. They’re the smart money because these firms go out of business if they’re wrong.

They tend to buy when they see value and sell when they believe prices are too high.

Interest rates move opposite to prices. When prices rise, interest rates fall. When commercials, or smart money, are buying, that means they expect the prices of bonds to rise, which means interest rates will fall.

We see a similar pattern in 10-year Treasuries. 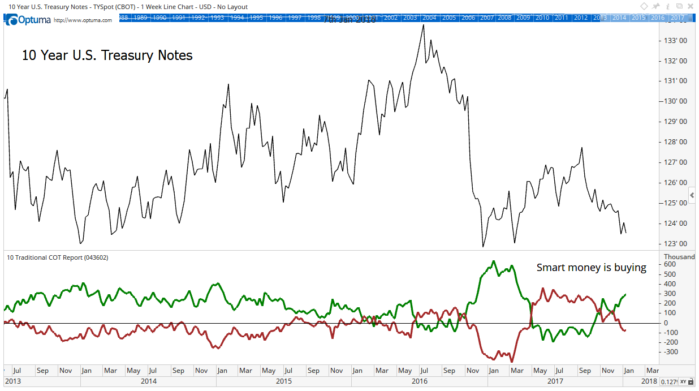 Again, the smart money is betting on higher prices and lower interest rates.

With their money, traders are telling us to expect a decline in interest rates, a message that is different from the Fed’s. This indicates that futures markets expect the economy to slow later in 2018 or in early 2019.

Traders are telling the Fed to take it easy. But the Fed often ignores the market. History shows the Fed will keep raising rates until it sparks a recession.

Traders can’t afford to wait for the recession. They need to be ready for it. And they are preparing for that next downturn now.

As investors, we need to watch for additional signs of a recession to avoid the next bear market in stocks.

This Chart Shows Why the Stock Market Isn’t Overvalued

Interest Rates Are Still Too Low to Matter