This Chart Shows Why the Stock Market Isn’t Overvalued

Many analysts claim fundamental ratios show that stocks are overpriced.

One popular long-term ratio is Dr. Robert Shiller’s cyclically adjusted price-to-earnings ratio, or CAPE ratio. With a recent reading of more than 32, the CAPE is higher than it was before the 2008 market crash.

Other ratios are also above their 2008 peaks. But these ratios don’t tell us very much by themselves. They need context.

One important factor is interest rates.

Over time, the Federal Reserve used different theories to set interest rates. The chart below shows those theories matter to the CAPE ratio. 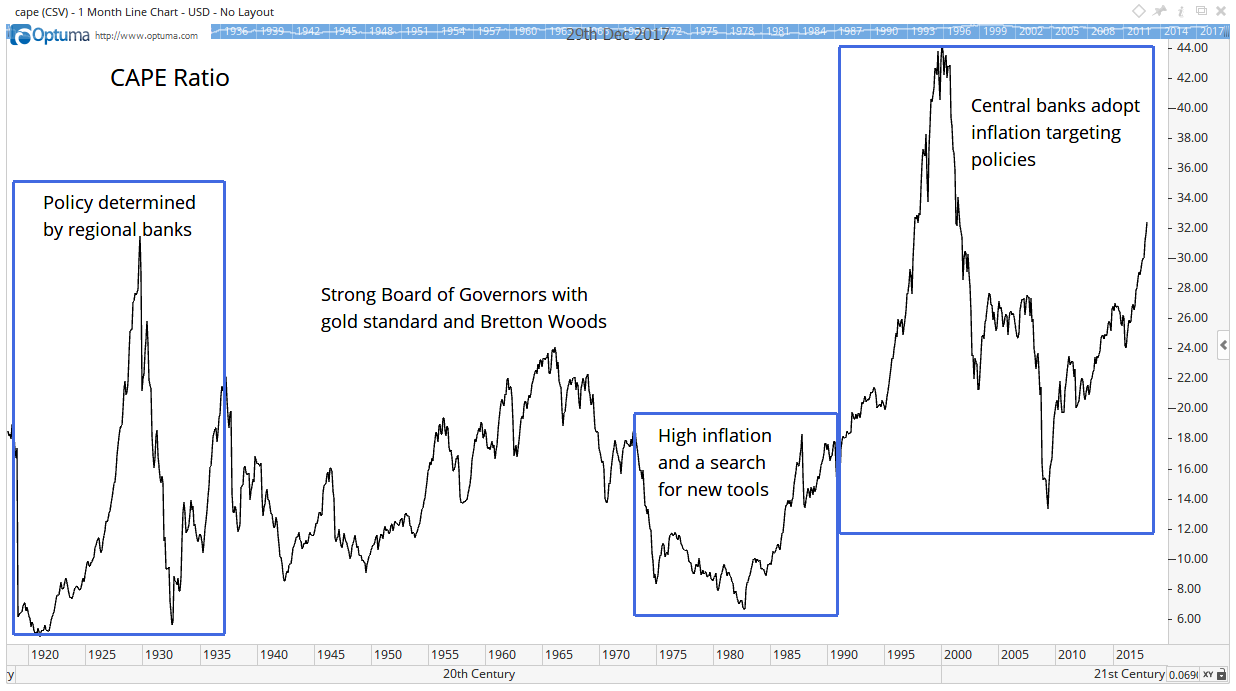 Now the Fed includes the Federal Open Market Committee (FOMC), the Board of Governors and regional banks.

Regional banks controlled policy for about 20 years after the Fed’s founding in 1913. That structure failed in the Great Depression.

Since no one knew who was really in charge, stock prices were volatile. The chart shows wide swings in the CAPE ratio were normal at that time.

As the country emerged from the Great Depression, the Banking Act of 1935 established the FOMC. That group maintains significant control over monetary policy.

This was also a time when countries adhered to the gold standard. Policies under the Bretton Woods Agreement maintained relatively stable foreign exchange rates.

Each of those factors contributed, in part, to fairly stable CAPE ratios.

But stability was short-lived. International events moved rapidly in the 1960s. As the U.S. abandoned the gold standard, inflation rose, and policy makers searched for new tools.

By the early 1990s, central banks around the world started targeting inflation. Now they use monetary policy to nudge inflation toward 2%.

We don’t know if inflation targeting is ultimately the best policy. But the chart shows that policy led to higher CAPE ratios.

This makes sense. Inflation is now an official goal of governments around the world.

Moderate inflation generally leads to higher prices for stocks. That means stocks should be worth more.

The CAPE ratio is one of the ways to measure what stocks are worth. So, CAPE should be higher when inflation is near 2%.

The chart shows that the right level of CAPE changes as Fed policy changes. So, we should ignore long-term historical comparisons.

CAPE has averaged 26 under the inflation-targeting regime. At 32, its current level, CAPE is at the upper limit of its expected range.

However, that will change.

Central banks are not hitting their target of 2% inflation. They will probably shoot through that target, and we will have a higher-than-desired inflation soon. That could lead to new policy tools, and that would reset the fair value of CAPE.

Lumber Prices Give the All-Clear Signal for the Stock Market

Traders Are Betting the Fed Is Wrong