Home » Investing » Stocks » The Production Boom Has Years of Growth Ahead

The Production Boom Has Years of Growth Ahead

Over the past couple of years, the outlook on global growth has been a roller coaster.

In 2015, everyone feared a global recession when leading countries like the United States and China fell short of growth expectations. The fear clearly showed in the beginning of 2016, which saw the stock market fall 10% in just a few weeks. It was the worst start to a year in stock market history.

But that proved to be just a temporary setback rather than an international disaster. Now production is nearing an all-time high, and people are much more optimistic about the economy as well as the stock market.

But what’s the best way to take advantage of this increased productivity?

When production increases, the demand for building materials and equipment goes way up. So now that there is strong growth in global production, people are beginning to buy up stocks in things like metals and mining.

There are a couple of different ways to invest in this using metals and mining ETFs (exchange-traded funds), which will give you the diversification of dozens of stocks for the price of one.

The first, which is a way to invest in the production boom on a global scale, is through the iShares MSCI Global Metals & Mining Producers ETF (PICK).

This is an ETF that I recommended back in August, and since then, it’s up about 18%. I still think it’s a good buying opportunity, however, it looks like after a pullback in production, it’s ready to ramp up again for several years.

Another ETF option is the SPDR S&P Metals and Mining ETF (NYSE: XME).

This fund only contains stocks of United States companies. But it’s widely believed that we will see a large-scale infrastructure overhaul in the next year. This would be much needed, as the charts below illustrate: 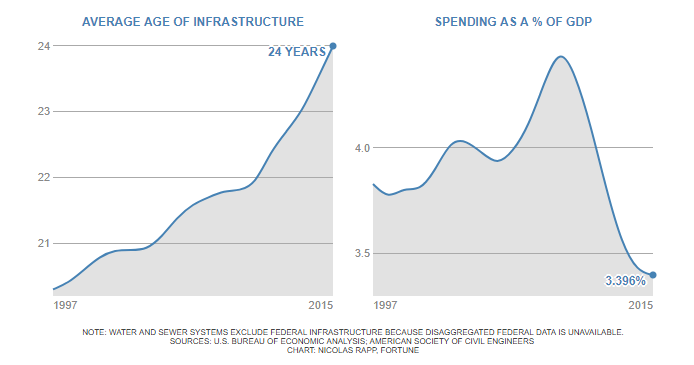 It would also create even more demand for all sorts of building materials, which in turn creates demand for mining companies.

Right now, I believe these two metals and mining ETFs are coming out of a huge bear market, and have years of growth ahead.