Investors might remember the market in 2000. That year, the internet bubble popped. Stocks were nearly 20% below their highs when unemployment bottomed.

As the chart below shows, that wasn’t the only time unemployment fell below 4%. Vertical blue lines show previous low levels of unemployment. 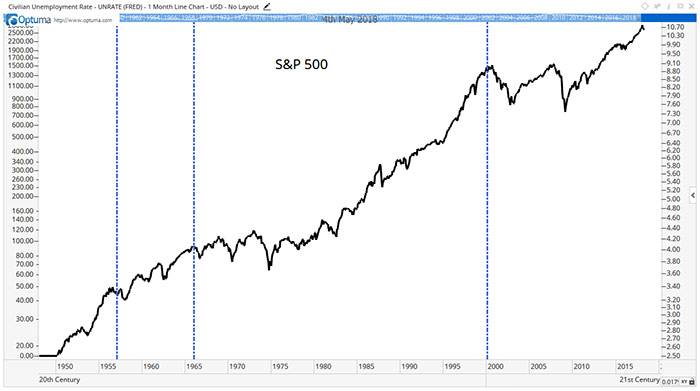 You probably see the problem. Each of those lines marks a bear market.

There’s a reason unemployment under 4% is bad for stocks. Low unemployment signals that the economy is overheated.

When the economy grows too fast, inflation picks up. Higher prices affect a few areas of the economy. After 2000, for example, inflation pushed home prices beyond reasonable expectations.

Inflation can also spread widely. That happened after the market peak in 1966. Market historians may remember 1966 as the beginning of a 16-year bear market.

Unemployment below 4% is rare. But history tells us it’s an important event. A stock market decline and higher inflation are likely. History says they are unavoidable.

This is simply the latest in a long series of ominous warnings for the stock market. Last October, I warned that the Federal Reserve would trigger a recession at its December meeting. It did.

We’re still on track for a recession to start late this year or early next year. I know that sounds like a wide window, but it carries a warning for stock market investors.

The S&P 500 remains well below its January highs. Economic data says it will remain below those highs for months, if not years.

8 Countries That Perform the Worst During the Great Stink