Home » Economy » U.S. Economy » The Fed Is Set to Trigger a Recession in December

The Fed Is Set to Trigger a Recession in December

The Federal Reserve’s job is easy to understand in some ways.

It cuts interest rates when the economy slows. Making money cheaper should lead to economic growth.

Then, when the Fed feels the economy is growing too fast, it raises rates. It keeps raising rates until it starts the next recession. And then the Fed starts over again.

The details are a little more complex than that. But this is what the Fed does.

In its defense, the Fed tries to stop raising rates before it starts a recession. But that’s hard to do, and it usually isn’t successful.

This pattern explains why investors watch interest rates so closely. And history tells us rate watchers are about to get big news. The Fed is weeks away from triggering the next recession.

This indicator predicted seven of the nine recessions since 1955, a 78% success rate. There were two false positives, a time when the yield curve inverted and no recession followed.

The inverted yield curve is a pretty good indicator. But economists at Wells Fargo developed a better indicator. Their tool identified all nine recessions but gave a total of 13 signals.

Three of the four false positive signals came right before market sell-offs. On average, the S&P 500 fell 11% within a year of the signal.

With this track record, this is an important indicator to watch. And we won’t have to watch for long. It’s expected to give its next signal at about 2 p.m. EST on December 13.

That’s when the Fed will announce if it decided to raise short-term interest rates at its two-day meeting. Right now, there’s a 93% probability of a rate hike, according to traders in fed funds futures.

On the Distant Horizon

The indicator says to expect a recession when the fed funds rate exceeds the previous low of the 10-year Treasury. The next chart summarizes the indictor. 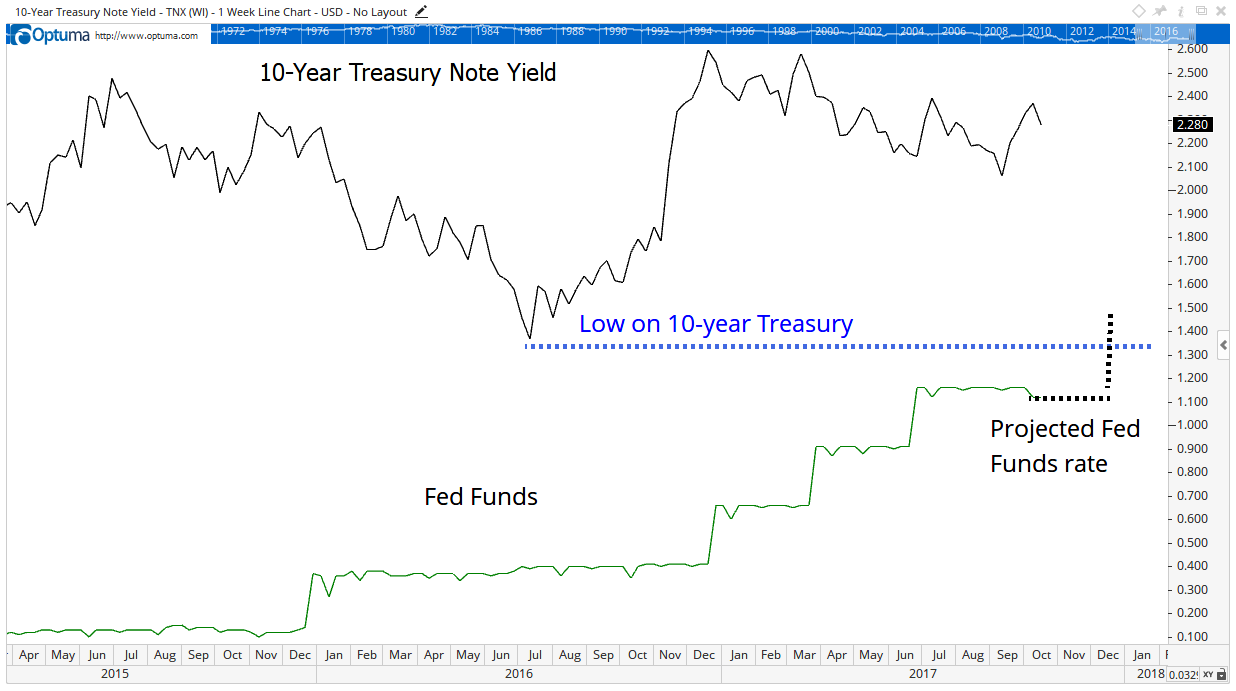 The expected increase in interest rates will push the fed funds rate to about 1.38%. This is above the previous low of the 10-year Treasury, which was 1.34%.

The recession indicator isn’t a pinpoint timing tool. Recessions followed signals by six to 34 months in the past, with an average lead time of 17 months.

We should expect the next recession to occur in late 2018 or early 2019. This has important implications for investors.

Next year, we could see the start of the bear market. That’s the bad news.

But there’s lots of good news.

The stock market usually soars higher before the bear market begins. The S&P 500 gained an average of 22% in the year before the previous three recession peaks.

With a recession on the distant horizon, investors should be buying stocks in preparation for the rally that precedes the crash.

This Early Warning Sign Shows That All Is Not Well

How Trump Will Change the Fed Forever