8 Countries That Perform the Worst During the Great Stink

You’ve probably heard the old Wall Street saying: “Sell in May and go away.”

Others call it “the worst six months” because the period includes six months that deliver below-average gains in the stock market.

Some analysts believe it’s good advice. They may not sell everything, but they trade less aggressively or hold higher-than-average levels of cash over the summer months.

We know all of this because numerous researchers have looked at the data and found it to be true.

But the saying was popular before history showed stocks underperformed in those six months. The saying actually seems to have its origins in England, where traders often found they simply couldn’t trade in the summer months.

Some sources report the original version of the saying was: “Sell in May and go away, and come on back on St. Leger’s Day.”

St. Leger’s Day is the day the St. Leger Stakes is run. This is a thoroughbred horse race that’s the last leg of the British Triple Crown. That horse race has been the traditional way for British aristocrats to mark the end of summer since 1776.

The end of summer marked the time of year when it was safe to return to London. For centuries, the city’s growth led to some difficult summers, culminating in the Great Stink of 1858. That year, the crippling odor from the Thames River forced Parliament to take action to make London more livable.

So, the idea of selling in May is based on the understandable custom of London’s aristocrats, merchants and bankers who fled the city of London during the hot summer months.

Like many Wall Street sayings, the simple adage holds some truth. Traders in the United States do tend to take vacations in the summer, and that reduces liquidity. This also seems to be true around the world.

Despite the Shaky Origins, the Strategy Works

One difference between now and 1858, besides the smell of London, is the fact that we can test ideas.

To see whether or not “sell in May” holds up around the world, I tested the idea using exchange-traded funds (ETFs) that track stock market indexes of different countries.

The test was simple. I looked at the total return over those six months.

Test data showed that these six months generally deliver below-average returns. This was true in almost all of the 40 countries tested. The eight countries with the worst returns are shown in the chart below. 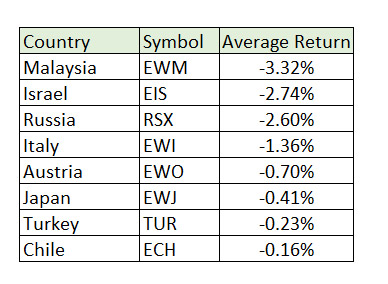 There’s no clear trend among the countries. They are located around the world and are at different levels of economic growth.

The only common theme is the time period. All eight countries show a loss, on average, over the worst six months of the year.

In part, the results reflect the problems that affected stocks when the Great Stink engulfed London. Traders expect less liquidity, and this means large traders are reluctant to tip their hands. They trade smaller than usual.

With lower-than-average liquidity, the markets tend to sell off quickly. This is why summers are so dangerous.

Traders can use this information in several ways. They could hold more cash in the summer. Or they could buy put options on the ETFs highlighted in the table above. A put option goes up in value when the price of the underlying ETF falls.

It’s hard to ignore trends that have worked for more than 100 years and in countries all around the world. The worst six months are not the best time to be aggressive. Caution now could be rewarded later.