Home » Investing » Buy Income and Growth With This “Dead” Industry

If you care about growth and income, one of today’s greatest investment opportunities is staring us in the face right now…

I know, I know. Malls are supposed to be dead.

Simon earned a better-than-expected $1.84 a share in the fourth quarter, compared to $1.26 in the same period last year, while 2017’s total profits rose a respectable 6%. More than 95% of the floor space in its malls is occupied.

That hardly sounds like a company on death’s door.

Even as Simon’s stock price fell 30% over the past 18 months as “dead mall” hysteria swept the financial markets, Simon raised its dividend by more than 20% to a recent quarterly payout of $1.95 a share. 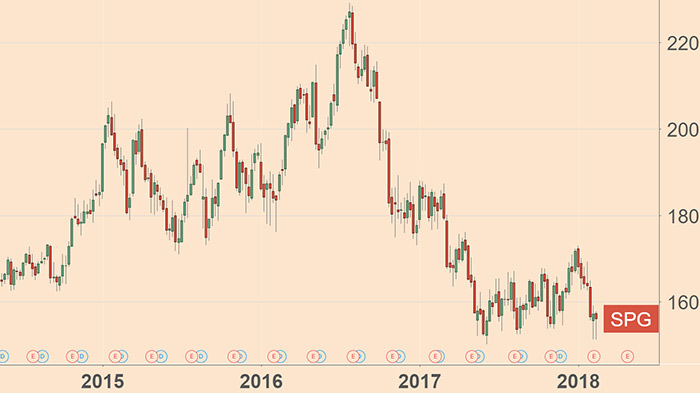 At that level, and Simon’s current stock price, a dividend investor is getting a yield of 5%. Yet Simon has the wherewithal to raise it even higher.

Its financial strength is such that the current dividend only represents about 50% of what it takes in from its mall tenants.

Bargains like Simon point to a classic Wall Street phenomenon. As I noted back in November when I first speculated that “the Great Mall-pocalypse of 2017 may have finally run its course,” the good gets thrown out with the bad. That creates an opportunity for contrarian-minded investors.

No one knows that better than Berkshire Hathaway CEO Warren Buffett.

That’s why his company owns nearly 10% each of two retail real estate investment trusts (REITs), Store Capital Corp. (NYSE: STOR) and Seritage Growth Properties (NYSE: SRG). Yet such is investors’ fear these days that you can buy both at practically the same price he did.

Buffett bought his stake in Store Capital in a private placement deal with the REIT at $20 a share. You can buy it today at $23 with a 5% dividend yield.

Store Capital raised the dividend yield by 14% over the last two years. It doesn’t own malls, but rather is a “triple net lease” developer of single-tenant properties.

Seritage was created by Sears’ owner Eddie Lampert as an entity to redevelop mall properties in which the struggling retailer was the main anchor tenant. Buffett bought his stake around $35 in 2015.

That news shot Seritage shares up into the mid-$50s at the time. But two years later, the “dead mall” meme succeeded in pummeling the security down 27% to $41 a share.

Seritage pays a dividend of only $0.25 a share — which it has yet to raise since its initial public offering (IPO) in 2015 — but that still represents a yield of 2.4% for investors buying today.

Editor’s Note: Anyone who joins cryptocurrency expert Ian King’s new research service will have the chance to turn $1,000 into at least $25,000 in the next 12 months. And frankly, the gains are likely going to be much higher, as a $1,000 investment in Litecoin last year turned into $50,000 … $1,000 in Ethereum became $90,000 … and $1,000 in Ripple grew to $360,000! And that was just the beginning of the crypto rally — the biggest gains are yet to come. To sign up for Ian’s free webinar presentation and learn the secret trick he uses to spot trades, simply click here now. But you must hurry! Sign-ups for this exclusive event close tonight, February 20, at midnight EST.

Worried About a Crash? Buy This Sector