China’s president Xi Jinping plans to use an “iron hand” on air pollution in China.

To meet that goal, he cut the amount of coal burning. That’s a huge shift in policy for the world’s largest user of coal.

You may remember the “airpocalypse” in Beijing in 2012 and 2013. That was a national embarrassment and a public health crisis.

Since then, there was a huge push to clean up China’s air.

The push to power China with natural gas cut pollution levels in half from 2016 to 2017.

Natural gas is China’s answer to air pollution concerns. Natural gas power plants create about half the amount of CO2 and virtually no particulate compared to coal plants.

However, high demand for natural gas this winter caused massive shortages. The country can’t produce enough natural gas domestically. It must look outside of its walls to find the natural gas to meet its needs.

U.S. natural gas will be part of that solution. There is a glut of natural gas in the U.S. thanks to the shale revolution.

The export process is slow and expensive. However, American exports could increase 300% by 2030. Take a look at the chart below: 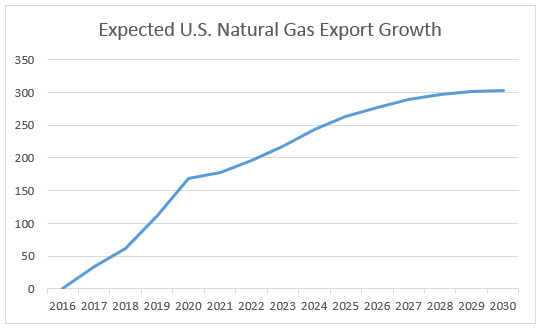 Cheniere Energy Inc. (NYSE: LNG), a Texas-based liquid natural gas (LNG) producer, has already signed a deal with Chinese buyers to supply them with over 1 million tons annually through 2043.

LNG is the result of purifying and cooling natural gas into its liquid form. Natural gas is 600 times more compact as a liquid, making it easier and safer to transport.

The number of LNG tankers in service has more than doubled since 2005, but they still can’t meet demand. Tankers are raising prices and booking months in advance.

Golar is a “freedom check” company that pays you to own them. Its 10% yield compounded can double your money in nine years!

China Shows How to Fight a 21st Century Trade War