Home » Economy » U.S. Economy » The Fed Is About to Topple This House of Cards

The Fed Is About to Topple This House of Cards

The destruction was astounding … and we didn’t even suffer the brunt of the storm.

My husband and I returned last weekend after evacuating South Florida, and the amount of damage we encountered was stunning.

Even now, nearly two weeks later, the area where we live and work is still attempting to recover. I continue to hear stories of people without power. The electric at our office cuts out randomly as workers repair area lines.

And there’s another storm ready to pummel the U.S. and leave behind a painfully slow recovery that could eat away at your wealth if you’re not prepared…

We’ve Got a Problem

The Great Recession left not only the United States but the entire globe in a financial crisis. And the first order of business: Spend!

Nearly every government latched onto the promise of spending their way out of the disaster.

Within the U.S., we fired up the printing presses and defined the era of “easy money” with ultralow interest rates.

And the price is that we’ve tallied up nearly $20 trillion in public debt. That debt is 107% of our gross domestic product (GDP).

But the U.S. isn’t the only country struggling with debt.

Japan has had a debt problem for decades. While its debt sits at only $11.4 trillion, it accounts for 239% of its GDP.

Greece, Italy, Portugal and Belgium also have public debt that exceeds their GDP. 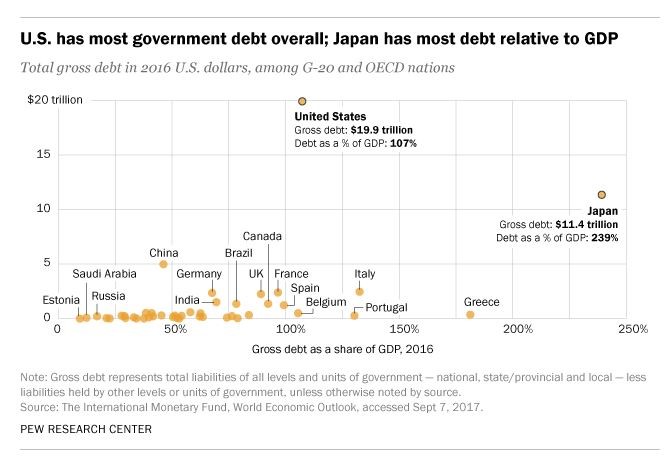 Throughout the Great Recession, we saw numerous countries ratchet up their debt levels so that it stood at a higher percentage of their GDP. 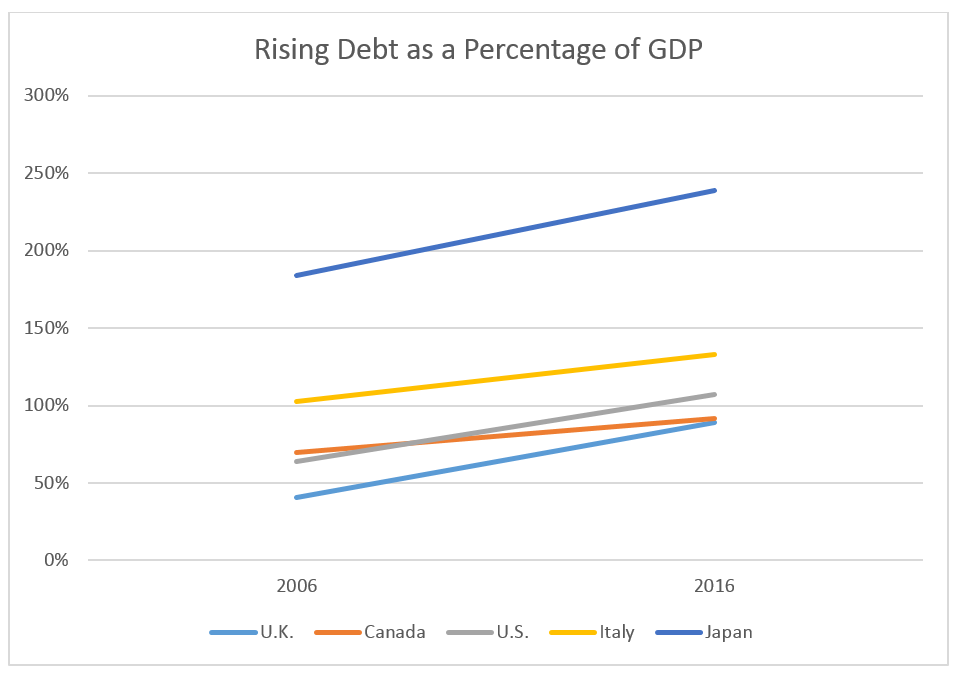 And while we’ve managed to stay afloat despite all of this debt thanks to an economy that is slowly but steadily growing, we are facing a dangerous time ahead. It’s all thanks to the Federal Reserve.

The Federal Open Market Committee met earlier this week. It was pretty much a nonevent, as everyone expected. Rates remained unchanged, hovering between 1% and 1.25%. That’s still the highest level since September 2008.

But we know that Fed Chair Janet Yellen and the rest of her team aren’t content to stop there.

The headline unemployment rate is resting near its lows at 4.4%, the economy is humming along and the stock market remains hot.

Sure, low inflation figures are still troubling the Fed.

But I’m not so sure that’s going to stay the Fed’s hand from raising rates yet again when it meets in December.

And rising interest rates mean that interest payments on all that debt — both government and private — are going to rise.

Consumers and the government are going to have less to spend thanks to massive amounts of debt and rising interest rates.

We’ve seen too often that the Fed takes interest rates a step too far, and it’s always well after the damage is done that it realizes its mistake. It’s time to brace for the Fed going a step too far, too fast.

And the U.S. is no longer alone when it comes to lifting interest rates.

The Bank of Canada surprised the market when it hiked its key interest rate by 25 basis points earlier this month to 1%.

Many market commentators have talked about the market nearing a tipping point. While we’re watching for that big, flashy bang that could topple this house of cards, it could actually arrive as a slow, painful unraveling.

But you don’t have to watch your own wealth unwind with the rest of the market.

The turmoil that could roil the markets should the Fed continue to lift rates and squeeze spending doesn’t have to destroy your portfolio as well.

It’s important that you take steps now to make sure that your wealth is properly diversified against the uncertainty within the market.

One critical facet of your portfolio should be physical gold. The yellow metal has historically grown in value while the economy struggles. It’s insurance against a correction … or worse.

Another is to have exposure to a variety of different sectors. For instance, Matt Badiali, editor of Real Wealth Strategist, has identified several natural resources that have just entered a new bull market and are poised to continue to make stellar gains regardless of the Fed.

The key is to take a hard look at your portfolio now and evaluate what could likely be hit by a significant market correction.

Are all your holdings in one sector?

Are all your holdings in aggressive positions?

Do you have trailing stops or an exit strategy in place to protect your gains?

Don’t be afraid to take some profits off the table and rebalance your holdings. It’s always better to lock in some gains than suffer the pain of getting out too late.

P.S. With market uncertainty growing, now is a great time to check out Chad Shoop’s special upcoming webinar. He has developed a trading system that produces steady income regardless of what’s happening in the market. To claim your spot in the upcoming webinar, click here.

If Inflation Jumps, The Stock Market Will Crash