Today, I’m circling back to a topic I have hit on several times before. It will likely continue to come up in the coming months.

It’s the fact that our economy continues to run below expectations.

Sub-2% growth has been and is continuing to be our economy’s growth trajectory.

Maybe President Donald Trump will steer this mothership in an upward direction, but we haven’t seen a sign of that yet.

And I base my judgment on one of the most reliable economic tools that I know of: the Atlanta Federal Reserve’s GDPNow model.

It fluctuates over the quarter as new data is released and calculates estimated gross domestic product (GDP) growth based on its expectations. These expectations continue to be let down, though, as it attempts to calculate the growth of the U.S. economy — and GDP is the most common measure of that.

Take a look at the latest reading, with an estimate of third-quarter growth just above 2%: 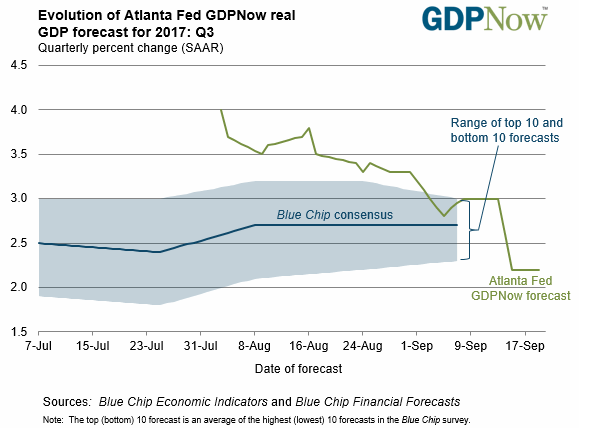 I use this chart to compare the latest GDP estimate versus previous estimates.

So in a perfect world, the U.S. economy was expected to grow by 4% in the third quarter.

You can see by the Blue Chip consensus range that this was never a legitimate outcome amongst many. But based on the economic data that was used as the baseline for the model, the newly revealed data has all been below that expectation.

This occurring once or twice isn’t an issue.

But it has occurred almost every quarter, aside for one, since the fourth quarter of 2015. That’s seven quarters over the past two years that have had lowered expectations as the data is released.

It hasn’t impacted stocks yet, but there is an ominous sign here that our economy continues to fall short of expectations, while the stock market continues to set record highs.

At some point, one or the other will align — either stocks will begin to fall, or our economy will heat up. It’s just a matter of time.

The Hidden Boom Within the Housing Boom

The Fed Is About to Topple This House of Cards