It’s probably his best-known quote. Those words inspired many to do great things, including putting a man on the moon.

Fifteen months after his inspiring address, Kennedy said: “Some time ago, I asked each American to consider what he would do for his country, and I asked the steel companies. In the last 24 hours, we had their answer.”

Their answer, according to Kennedy, was “a wholly unjustifiable and irresponsible defiance of the public interest.”

In an April 1962 press conference, he criticized “a tiny handful of steel executives whose pursuit of private power and profit exceeds their sense of public responsibility.”

Before Kennedy was finished, he noted that the executives had “utter contempt” for their country. The stock market reacted quickly to these words.

Traders were concerned. A president was threatening an important industry. In the next nine weeks, the S&P 500 Index fell 22.6%.

You probably realize that this isn’t just a trip down memory lane. There’s an analogy with today’s market action.

President Donald Trump set his sight on Amazon. He argues the internet retailer is hurting “towns, cities and states throughout the U.S.”

It’s not just about retail. Trump also tweets about the Washington Post, which is owned by Amazon CEO Jeff Bezos. It’s a frequent target of Trump’s “#fakenews” hashtag attacks.

Like Kennedy, Trump’s attack is personal. And this is unlikely to be good for the stock market. 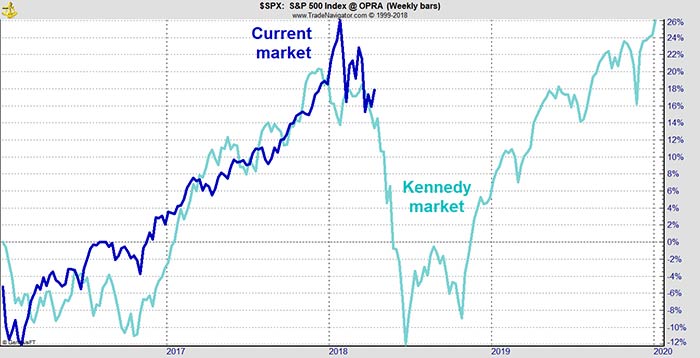 Trump’s attack, like Kennedy’s, accelerated in the spring of a midterm election year. History says this could be bearish for the stock market.

The next chart shows the Trump market has been closely tracking the Kennedy market.

This is a chart of the S&P 500 Index. The starting point for the two lines is the month of the election in 1960 and in 2016. So far, Trump’s market is stronger than the Kennedy market.

The close fit of the two lines tells us to expect stock market weakness in the coming months. But this market shouldn’t fall as much as the 1962 market.

That’s because Kennedy went beyond words.

Some of Kennedy’s actions were aggressive, but legal. Department of Defense contracts went to steel companies with lower prices. Congress threatened antitrust hearings against the steel industry.

Some actions were questionable.

Attorney General Robert Kennedy, the president’s younger brother, sent FBI agents to reporters’ homes in the middle of the night. The agents wanted to know about conversations the reporters had with the steel executives. There were threats of IRS audits.

So far, Trump is more restrained than Kennedy. Safeguards, in theory, prevent the politicization of the FBI and IRS. It’s unlikely these agencies would break, or even bend, the law for Trump.

But a president’s careless comment can still spark a bear market. Kennedy learned that lesson. Now, the risk of Trump learning that lesson is high.