And I wonder if it just might be the biggest market-timing signal of all time too.

I’m talking about the Rockefeller family’s epic sale of collected works — paintings by Picasso, Monet and Matisse, Chinese bronze figures, jewelry, the most exquisite of antique furniture … you name it.

It’s the sum total of a lifetime of collecting by David Rockefeller, the last of John D. Rockefeller’s grandkids, who died recently at age 101 with a personal net worth of $3.3 billion.

And it all goes on the block at Christie’s in early May.

Art experts think the trove could bring in perhaps as much as $1 billion or more at auction (with the proceeds donated to charity).

Why should we care, as investors?

Well, in the last few years, the Rockefeller clan has had an extraordinary touch for market timing.

Think back. When was the last time a group of Rockefeller heirs made news with a major asset sale?

It was in 2014 with crude oil. One of the main family trusts, the Rockefeller Brothers Fund, announced that it would divest its fossil-fuel investments in support of efforts to fight global warming.

And what happened afterward? 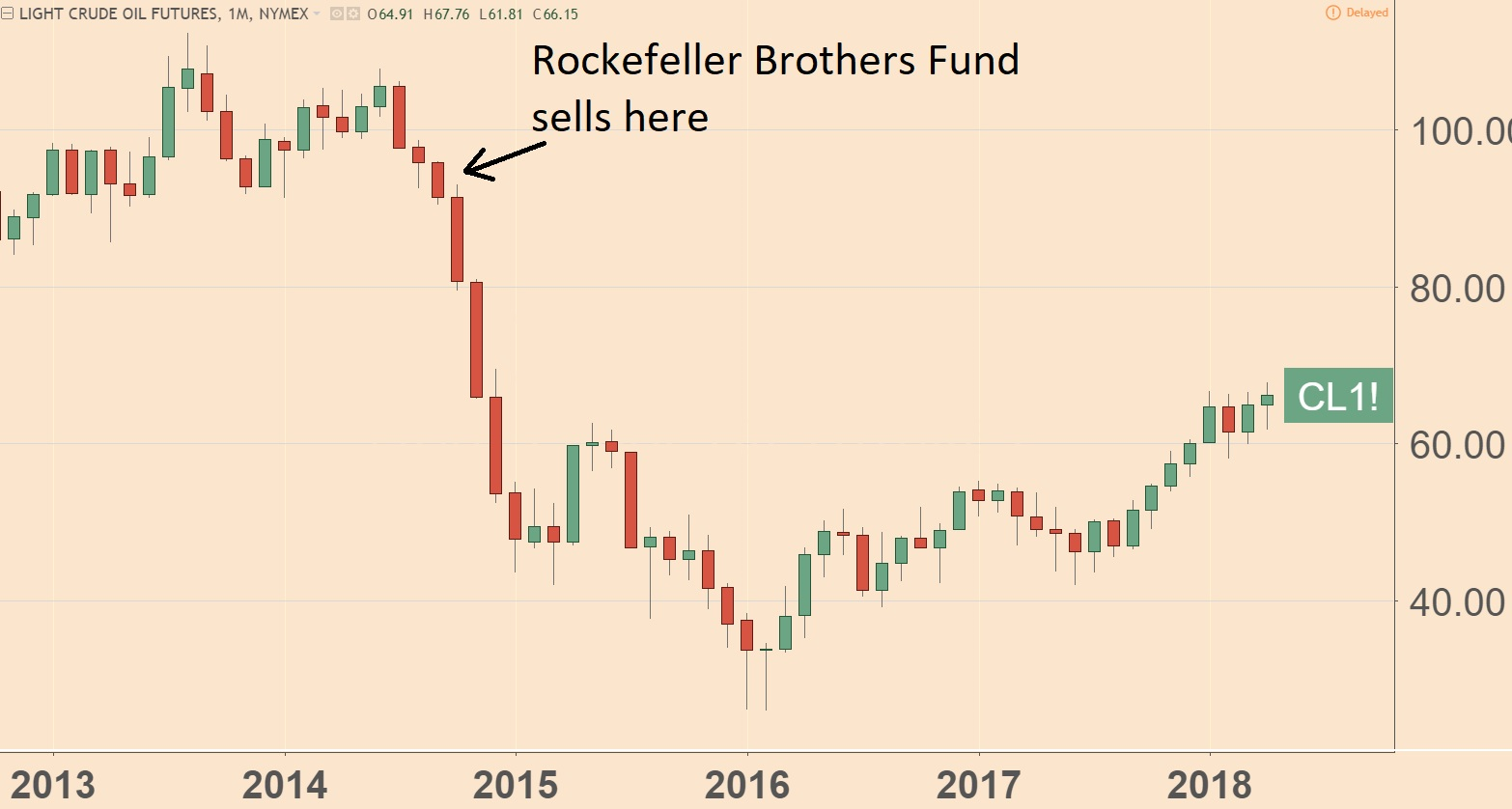 Don’t get me wrong. It’s one entirely coincidental observation. I’m not suggesting manipulation or anything remotely nefarious.

But you don’t build generational wealth, as the Rockefellers have done for more than a century now, by following the crowd.

You do it by taking a hard-nosed view of asset prices, and where the best values are.

Let me put it a different way…

Do you think the Rockefeller family trust would have sold out of its oil holdings in the name of global warming at $26 a barrel, instead of $92?

Of course not. Even when it’s done in the name of charity or a worthy cause, the object of the game remains the same: Buy low. Sell high.

So that’s why the upcoming Rockefeller art auction piques my interest.

Art and the Economy

What does it say about today’s economic environment if David Rockefeller’s heirs are selling his massive collection of art — and everyone else is eagerly buying?

Smart investors have long recognized the relationship between soaring art prices as a signal of overconfident investors.

For instance, researchers at the CFA Institute noted the relationship between the stock price of Sotheby’s (NYSE: BID) — the premier art world auction house — and important highs in the stock market.

So perhaps it’s no surprise that Sotheby’s shares are, right now, within 5% of surpassing the stock’s previous all-time high set last July.

Does that mean sell everything and run for the hills? No.

But it’s worth keeping in mind as we enjoy our ongoing stock market without getting too overconfident in our attitudes.

(Unlike all those buyers of Rockefeller art at next month’s auction.)