No one wants to talk about cybersecurity, but recent hacks have changed the tunes of many companies and individuals.

Back in July, hackers compromised the identities of 143 million Americans when they breached one of the largest credit bureaus in America.

Then, it waited until September to publicly release the information. It turns out the weak spot in the company’s online platform existed for nine years, but it was never fixed.

Of course, I’m talking about the Equifax hack. It was one of the biggest deals in cybersecurity history … but these attacks are really happening every day. 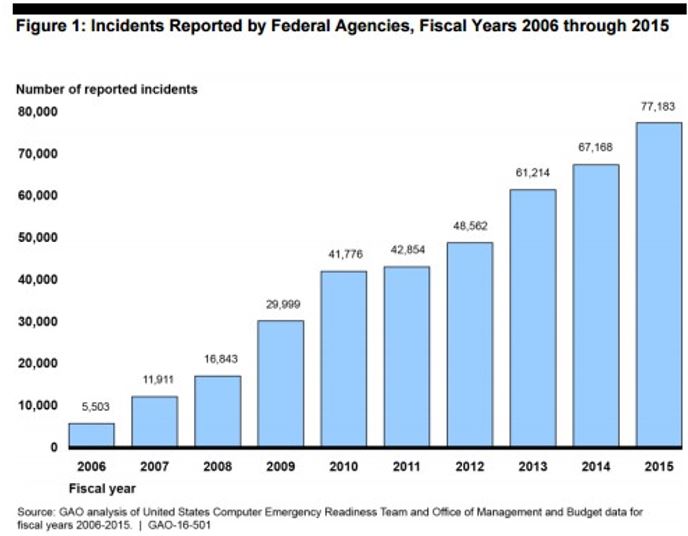 As the chart above shows, there were over 200 “incidents” per day on average in 2015. And it’s only gotten worse since then. For every attack that makes media coverage, there are thousands of attempts at stealing information from databases around the world.

The Equifax situation shows just how vulnerable companies are to these crimes. And these breaches not only have the potential to ruin its customers’ lives, they can also force a business into shutting down due to a lack of trust.

That means any sensible company, government agency, etc., will be investing in the best possible cybersecurity system it can find.

The Best in the Cybersecurity Business

There is one that Jeff Yastine, editor of Total Wealth Insider, has identified that is seeing some major growth. The firm has over 42,500 customers (businesses, not individuals) all over the world. That includes over half of Fortune 2,000 companies.

And it recently reported that its market potential is over $19.1 billion, set to grow to $24 billion by 2020. That’s pretty huge, considering its sales over the past year have been about $1.8 billion.

As the cybersecurity issue continues to attract business for this firm, its stock should see some impressive gains.

Retail: The Perfect Buy for Christmas

Capture the Next Big Trend in Solar Energy