Capture the Next Big Trend in Solar Energy

I don’t know what I’d do without electricity. Honestly, I start to get bored after about 30 minutes.

And the thought of there being only 40 years of coal resources left to power our world is pretty terrifying.

But that’s just me.

In today’s world, electricity is one of the most important resources we have. It powers almost every single business around, and about 83% of people around the globe depend on it every day.

And while most have realized how finite resources such as coal are, we’re finally starting to move to the next step: solar.

A Shining Source of Energy

Humanity has literally had the answer to all of the global power needs staring down at them the entire time. That would be the sun.

Obviously, it’s a powerful resource. It can damage our skin or blind us from 93 million miles away.

But what people are just starting to realize is that we could power the entire world by harnessing its energy.

Here are two statistics to put this in perspective:

Statistic No. 1: The amount of power from the sun that hits the earth in one hour in direct sunlight is enough to meet the power needs for the entire world for a whole year.

Here’s an image to get the point across: 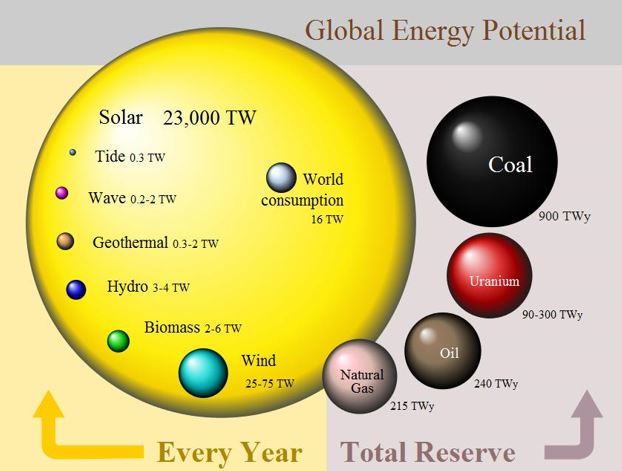 Thankfully, we have made significant progress in harnessing this abundant energy resource.

Currently, there are a number of projects going on around the world to phase solar power in to the primary source of energy that we would use.

The Next Advance in Solar Energy

New technology is in the works for solar windows as well.
These windows don’t look any different from normal windows, but they contain technology that can capture solar energy as well. Placed in homes and offices, they can provide an easy, alternative source of energy.

Solar window could be the future of solar technology. Instead a home covered in solar panels on the roof, the window are the solar collectors.

A breakthrough in this technology has occurred just this past June. Physee, a company in The Netherlands, installed 323 square feet of their “PowerWindow” solar window product in the headquarters of Rabobank, The Netherlands’ biggest bank.

In America, there’s a company called SolarWindow Technologies (OTC: WNDW) that is making significant progress in the field as well. Described as “liquid energy,” SolarWindow’s technology is a clear coating placed windows or plastic. When exposed to light, the coating turns that light into electricity.

So far, the product has been tested in 11 cities across the country, and the results have been amazing. The SolarWindow coating generated over 10 times that of other solar technology: 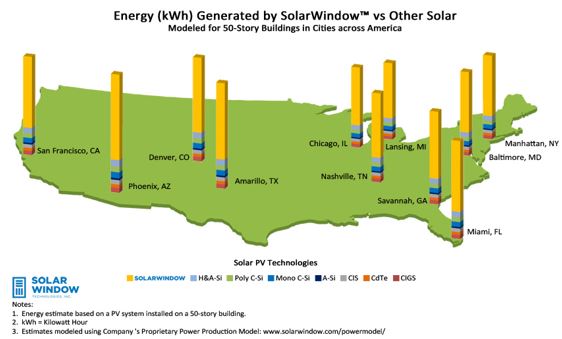 It’s also much cheaper than the cost of manufacturing solar panels. In fact, the company has stated that when applied to high-rise buildings, the product could pay for itself on electricity bill savings in just one year.

Lastly, SolarWindow took a huge step in August when it entered into an agreement with Triview Glass, allowing SolarWindow to start receiving revenue from actual customers.

Keep in mind that these are the very early stages of this technology, and while it has very little commercial application so far (and therefore no revenue); it will become more and more relevant over the next three to five years.

I believe it will eventually overtake solar panels due to the cost and efficiency benefits that it provides.

This Chart Shows Us More Volatility Is Coming