Saudi Stock Exchange Is an Undervalued Opportunity for American Investors

There are 60 major stock exchanges in the world. By itself, the New York Stock Exchange (NYSE) is bigger than the 50 smallest exchanges.

Many investors never even think about investing in the 50 smallest exchanges. This means they are missing out on the most exciting opportunities in the world.

Some of the smallest markets make great investments.

A New Sources of Funds

Investors often associate Saudi Arabia with oil, which isn’t surprising since it’s one of the world’s top oil producers by volume. The kingdom churns out approximately 12.39 million barrels per day.

And, if they want to invest in oil, there are other opportunities that seem less risky. Perceived risks in Saudi Arabia include concerns the government could disrupt the economy.

In the past few weeks, that risk became real. The Saudi government arrested dozens of princes and key officials. Arrestees include some of the country’s richest citizens.

There’s not much news from the Kingdom, but speculation is that this action could turbocharge the economy. Experts believe this is basically a “shakedown” where the government grabs some that wealth.

By the time this roundup is over, the government might take back about $800 billion in assets.

And the government could certainly use the money. The kingdom relies on oil for its revenue. Declining oil prices hurt the country.

The detained princes control more than one year of economic output for the country. Those funds could replenish the country’s foreign reserves, which have fallen by a third in the past three years. That would allow the government to lower costs for average citizens by punishing just a few.

All this recent turmoil looks like a positive for the country. That means now could be the time to buy stocks in Saudi Arabia.

The average stock in the exchange-traded fund (ETF) is trading with a price-to-earnings (P/E) ratio of 14 and a price-to-book (P/B) ratio of 1.5.

Even though it’s cheap, KSA sold off on the news of the arrests. The ETF is about 9% off its recent highs. 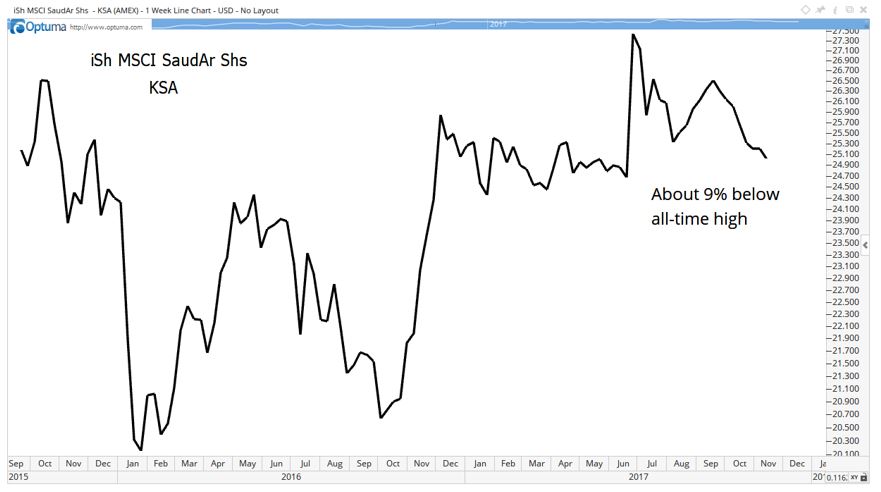 But, Saudi Arabia is changing. Less than two months ago, the government said that women could drive starting next summer. This is a big change for the country.

Social change comes as the government is working to diversify the economy. There’s a plan to do that by 2030. Funding those plans is a lot easier with an extra $800 billion. That’s more than three years of government spending.

Profit From Change in Saudi Arabia

News related to the arrests will provide a catalyst for the stock market. Each billion-dollar shakedown will push stocks higher.

Based solely on headlines, KSA sounds risky right now. But, big rewards come from the riskiest places. KSA could double from here, and it will happen quickly as the government makes billions from its detained princes.

Time Is Running Out to Turbocharge Your Investments