Want more proof that investing in the obvious … isn’t so obviously great?

Take a look at the much-hyped ProShares “Decline of the Retail Store” ETF (with its cute-at-the-time ticker symbol “EMTY”). It was a “sure thing” investment.

Launched in November last year, the exchange-traded fund (ETF) was supposed to profit mightily from the decline of malls and mall-based retailers. Instead, it’s down 20% from inception and disappearing fast into the abyss.

On the other hand, if you’d bought Taubman Centers (NYSE: TCO) or Store Capital (Nasdaq: STOR) or Seritage Growth Properties (NYSE: SRG) on November 14 last year, when I suggested the whole “retail-a-mageddon” “mall-pacolypse” thing had run its course — you’d be up 15%, 10% and 22%, respectively.

Or if you’d bought PowerShares Dynamic Retail ETF (NYSE: PMR) on February 13 this year, when I said a brief sell-off had turned “this already undervalued group of companies into a heavily undervalued group,” you’d be up tidy 13% in just six months. 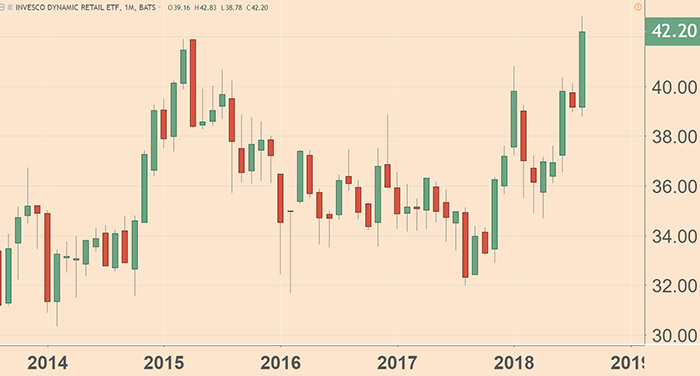 What happened to this much-maligned group of retail companies that many — like the ETF chart above — are trading at all-time highs again?

As I noted in November:

There’s no arguing that the U.S. is “over-malled.” Amazon has, of course, played a huge role in the downfall of many malls as once ubiquitous retail chains shutter stores or declare bankruptcy. But when asset prices fall to cheap-enough levels, bargain hunters come calling.

Nordstrom, for instance, saw its online sales leap 23% in the second quarter, the latest in a string of steadily improving digital numbers in recent quarters. Yet, in November, Nordstrom’s stock had a price-to-earnings (P/E) ratio of 11.7 — its lowest valuation in a decade.

No wonder Nordstrom’s shares are up more than 30% year to date. Investors were happy to snatch up this bargain.

Likewise, Walmart’s stock jumped 60% between January 2017 and January 2018. And no wonder! The shares had a P/E multiple of 13 — its lowest valuation since the late 1990s — before the shares rallied on news that the company could “do” online sales every bit as smartly as Amazon.

If you’re a value investor, you see this happen time and again.

Individual companies are turned into Wall Street roadkill. Or entire sectors are written off as yesterday’s news and given the ol’ heave-ho from many a pension fund portfolio.

Yet if you pick carefully among the survivors, it turns out there’s plenty of life. Undervalued bargains actually, just waiting to be picked up by the lone wolf value hunter who doesn’t mind going against the crowd.

As it turns out, I have two extreme value retailer picks in the Total Wealth Insider portfolio. Together, this pair are up nearly 70% in eight months (not to mention clipping sizable dividend payouts along the way).

Both have fast-growing online sales efforts. But what really made the stocks pop so much in a such a short time? Both had the lowest P/E multiples since the days of the Great Recession — and no one (least of all the strategists and pundits on Wall Street) seemed to know or care.

The point is, it’s hard to lose money when a group of stocks is so extremely undervalued.

All investors need to do is hop onboard and ride the “value train” express a few more stops down the line — and harvest strong profits.