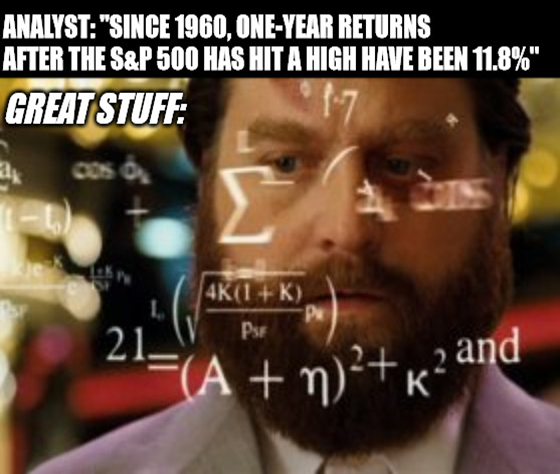 Friday Four Play: The “They Did the Math” Edition

It’s come to my attention that I have a reputation for being a market bear.

Honestly, with all Great Stuff’s “be prepared” and “buy gold and safe haven investments” talk, I can see why. Personally, I prefer “market realist,” but perception is perception, and reader sentiment is hard to argue with.

You’d think that profit-taking or bullish exhaustion would send the S&P 500 lower over the following year. But that isn’t the case … and hasn’t been the case since 1960.

He’s even got a nice, pretty chart that details the returns for one, three, six and twelve months following a new S&P 500 high:

I can just hear you now…

But what about the pandemic! China! The election!

Here’s the thing: There’s a crucial factor at play here, and it’s something we all tend to overlook.

The stock market — and therefore stock prices — is a leading indicator. In other words, Wall Street supposedly factored in all of those risks already, priced them into stock valuations and is now looking ahead.

This is part of the reason why stock prices rally while the U.S. economy still struggles to recover. Stock prices look forward — it’s one of the most basic principles of the market. Some 21 million Americans may be out of a job, but economic data points toward improvement on that front, so stock prices rally.

So essentially, Detrick says that stonks usually keep going up … and he did the math.

Kudos to Ryan for the research, but he’s not the only bull out there pushing a revitalization of American stocks.

Paul — our resident permabull — tells market negativity where to shove it and laughs in the face of bears bleeding red. When Paul scoffed at uncertainty and said the market would go up, it went up — in 2008, in 2011 and even 2016.

Right now he’s predicting this whole bull rally shebang to keep on chugging — all propelled by American stocks and innovation. To Paul, the No. 1 stock for you to own is a little-known company that isn’t just positioned to profit from “America 2.0” … it will be essential in building America 2.0. 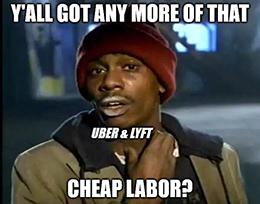 California can be a tough nut to crack for many businesses. Just ask Tesla Inc. (Nasdaq: TSLA) CEO Elon Musk.

After the state passed Assembly Bill 5 — the one that reclassifies ride-share and delivery drivers as employees and not contractors — Uber Technologies Inc. (NYSE: UBER) and Lyft Inc. (Nasdaq: LYFT) were on the verge of taking their ball and going home.

The law went into effect on January 1 of this year, and California filed a lawsuit against Uber and Lyft in May for not complying.

Last week, California won an injunction requiring Uber and Lyft to follow the law by this Friday while the case goes on. Both companies said that they needed more time and that they couldn’t comply with the new law overnight.

Today I learned that half a year and some change equals “overnight.”

However, the dynamic ride-share duo appealed the injunction, and California stayed the order to comply for 10 days. So, good news Lyft and Uber drivers and riders … both companies will continue to operate in California for at least 10 more days.

This whole thing gives me a headache, and I’m not even bullish on Uber or Lyft.

The potential fallout is clear: If Uber and Lyft lose in California, more states could be emboldened to follow suit. And that could mean a world of hurt for UBER and LYFT investors. 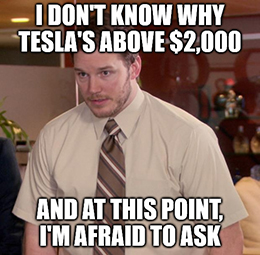 I’ve got this feeling inside my bones. Tesla goes electric, wavy when you turn it on.

All over Wall Street. All through my home. Tesla’s flying up, no ceiling in the zone.

If you hold TSLA stock, you’ve literally got that sunshine in your pocket. Got that good soul in your feet. The shares topped $2,000 for the first time ever yesterday, and there seems to be no stopping Tesla.

Honestly, it’s a perfect bullish storm that amps up sentiment to 11. Even long-standing Tesla bears capitulated to the uptrend. Last week, Wedbush Securities changed its mind on TSLA and lifted its price target.

The ironic thing here is that we just talked about technical data driving future growth for the S&P 500. But we’re long past technical and fundamental drivers for Tesla’s rally at this point. We’re into pure, unadulterated “feel-good” territory with Tesla at this point.

I have long been a Tesla bull, but even I think that TSLA needs a correction at this point. Its price-to-earnings ratio is above 1,000 for heaven’s sake!

But, with a five-for-one stock split a little over a week away, I don’t think we’re going to see a price reversal anytime soon. If you’re a Tesla investor, hang on and enjoy the ride … but be prepared to take profits if this feel-good rally starts to falter. 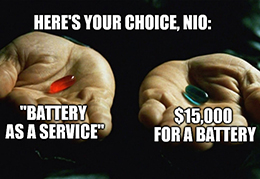 Good news, European Great Stuff readers! (And yes, I know there are quite a few of you out there; we haven’t heard from you in a while. Write to us!)

So where will Nio reach? Don’t know yet. Not one to bother with any conversational fluff, Nio Chairman William Li stated: “We hope to begin with Europe.” When? No idea. But the company thinks it’ll be “in the second half of 2020” … within the next few months, in other words.

Anyway, Nio’s announcement did come with other stellar news, if not for details on the company’s European expansion.

Nio also teased something it calls “battery as a service,” where you could subscribe to get battery packs on the regular, starting at $140 if you buy an EV sans battery. It could be an unwieldy disaster, or it could be groundbreaking for the sector, like the Dollar Shave Club of EVs.

Nio plans to collaborate with Tesla’s supplier Contemporary Amperex Technology Co. Ltd. to make it so.

Combined with its impressive sales growth, the Tesla of China is finally further on its way to becoming, well, a cheap knockoff of what many consider to be the “Real Deal.” Either way, it’s all about battery tech going forward, and you don’t want to miss out on it. Click here for more! 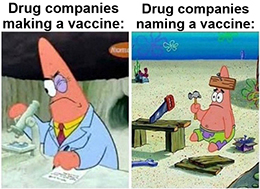 Yes, it’s been some time since we checked in on biotech brethren BioNTech SE (Nasdaq: BNTX) and Pfizer Inc. (NYSE: PFE), the pair combining forces in the Great Vaccine Race.

New data from the companies has analysts giddy (again, but perhaps rightly so). Things are getting pretty serious here, you could say.

As Cantor Fitzgerald Analyst Louise Chen stated: “The data and our discussions with physicians, support our view that PFE and BNTX could have the first-in-class, as well as best-in-class, vaccine to treat COVID-19.”

It’s a bold statement in a vaccine race propelled by bold headlines and (every now and then) data.

The particular vaccine in question here is called BNT162b2 — the new, improved and slightly similar version of the previously tried BNT162b1. Just like Cadbury Eggs and Butterfingers — they’re always changing the formula up on you.

It’s all part of a joint effort from the two biotechs, currently in phase 2/3 trials, which so far includes 11,000 patients out of a target of 30,000. This time, the data actually backs up the bold claims made by analysts, and they didn’t even need to consult Mr. My Pillow either.

With a similar immune response to its previous iteration, the new vaccine candidate appeared to have milder reactions and side effects, especially in the elderly. So what does the fab couple win today for legitimate good news?

PFE largely remained flat, while BNTX was up about 10%.

Great Stuff: Go Out With a Bang!

I don’t know about you all, but I can’t wait another second to dive into this weekend headfirst.

No, it’s not been a rough week — I’ve just earmarked a few of your greatest emails to look back on! What? I don’t judge your Saturday hobbies … unless they include not writing in to your favorite e-zine.

Speaking of which, why not scratch one more email off your to-write list?

Do your part to give us an earful: GreatStuffToday@banyanhill.com. We’d love to catch up with you in next week’s edition of Reader Feedback!