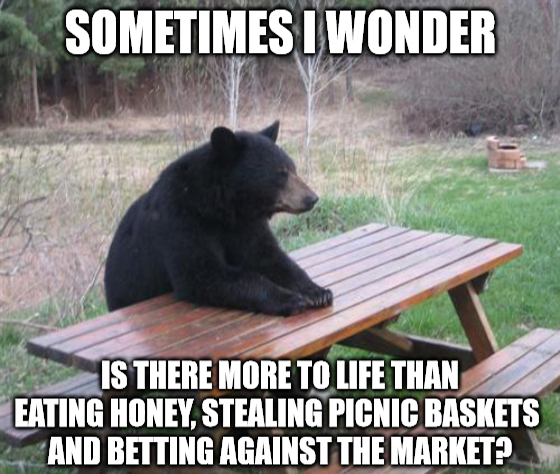 Well, we’ve never known a market quite like this, and it feels like these gains might never come again. But Great Stuff readers know better than to try and pretend. No one could’a ever told you about this.

Since almost the beginning of 2020, we’ve been waiting for a COVID-19 cure … a vaccine … something concrete to give us hope. As Tom Petty always said, “the waiting is the hardest part.” Every day we get one more vaccine report. Wall Street takes it on faith, it takes it to the heart … you know the rest.

This being 2020, however, waiting hasn’t been all that bad for investors. The market is trading at all-time highs, after all, despite any concrete evidence of a vaccine or treatment.

Today is no different.

Stocks rallied today after President Trump announced emergency authorization for a new COVID-19 treatment: convalescent plasma. In layman’s terms, convalescent plasma is the blood plasma from COVID-19 patients that have recovered from the virus. It is heavily laden with virus antibodies and has been shown to reduce deaths by up to 35%.

The White House called the treatment “promising” and “a breakthrough.” But the Food and Drug Administration (FDA) dialed the rhetoric back quite a bit:

COVID-19 convalescent plasma should not be considered a new standard of care for the treatment of patients with COVID-19. Additional data will be forthcoming from other analyses and ongoing, well-controlled clinical trials in the coming months.

Trump is also reportedly considering fast-tracking AstraZeneca PLC’s (NYSE: AZN) experimental COVID-19 vaccine for use in the U.S. And he wants it before the November election. According to the reports, the president could instruct the FDA to award “emergency use authorization” for the vaccine.

However, a spokesperson for Health and Human Services (HHS) said that such claims were “absolutely false.”

In true 2020 fashion, however, HHS’ denial did not stem speculation. For instance, AZN shares rallied more than 3% on the news.

I guess we’re left with taking it on faith … taking it to the heart.

The waiting (for sanity to return) really is the hardest part.

If you’re tired of waiting, don’t let it kill your portfolio. Don’t let it get to you.

Mike Carr, your favorite rocket surgeon, is back in a new action-packed research adventure: “Strike Zone!”

Is that enough exclamation points for you?! Here have a few more: !!!!!

Stop waiting! Click here to get in on this “don’t miss” research service of the year!

Going: Runnin’ Down a Dream 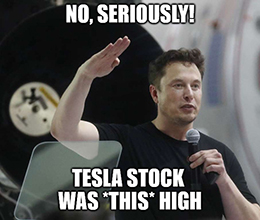 No, this isn’t about CEO Elon Musk. Not yet, at least.

It’s about Tesla’s five-for-one stock split. TSLA shareholders of record on August 21 are about to receive a special, one-time dividend of four TSLA shares. That payout happens on August 28 … this Friday.

Since announcing the split on August 11, Tesla shares have surged more than 50%. That’s right. A 50% gain in less than two weeks. But that’s just a drop in the bucket. Since the beginning of the year, TSLA has soared more than 360%!

Now, there have been some legitimately bullish drivers for Tesla this year. The company has banked four consecutive quarters in the black. Tesla is all but guaranteed to join the S&P 500 Index. Furthermore, orders and production in China are rising. All in all, this is arguably Tesla’s best year ever. And that’s despite a global pandemic.

But, at some point, we need to take our foot off the accelerator and look at Tesla’s valuation. I mean truly look at it. For starters, the stock’s price-to-earnings ratio of 1,026 should be more than concerning. But there’s another angle worth considering:

According to Analyst AG Thorson, if Tesla “…paid 100% of its annual revenue to shareholders as a dividend … how many calendar days would it take to recover your initial investment…” at today’s stock price?

Under this scenario, it would take more than 14 years to recoup your investment!

Now, clearly, this isn’t possible — investments and companies just don’t work like that. Even Thorson admits to that in his analysis. It’s just something to chew on this week while TSLA jumps around like a water droplet on a hot skillet.

Going: Time to Move On? 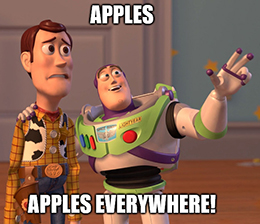 Tesla isn’t the only stock heading for splitsville in the next week. Apple Inc. (Nasdaq: AAPL) is set to get drawn and quartered.

If you want in on Apple’s stock split, today is your last chance. Shareholders of record as of today’s close will see their AAPL shares quadrupled on August 31. The rush to get in on the action pushed AAPL to fresh all-time highs north of $500.

So far, it seems that AAPL investors are much more focused on the stock split than the rather important war with video gamemaker Epic Games Inc.

I’m telling you right now … you need to keep an eye on this legal battle. Apple’s “walled garden” is under attack for antitrust and anti-competitive practices. And Epic has a lot of cash and developer support on its side.

Gone: Even the Losers 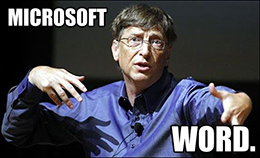 Remember the big brouhaha back in 1998 about Internet Explorer?

Well, today Microsoft filed a brief in the Apple versus Epic battle … and it did so on behalf of Epic:

If Unreal Engine cannot support games for iOS or macOS, Microsoft would be required to choose between abandoning its customers and potential customers on the iOS and macOS platforms or choosing a different game engine when preparing to develop new games.

Apple’s discontinuation of Epic’s ability to develop and support Unreal Engine for iOS or macOS will harm game creators and gamers.

Let’s add a bit of perspective here. There are basically only two major “engines” used to make video game apps for iOS and Android phones: Unreal Engine and Unity. Without these “engines,” many apps simply wouldn’t exist. Unreal is, by far, the most popular video game engine in the market right now, and it is maintained by Epic.

Apple has threatened to revoke Epic’s developer license iOS and macOS, which would effectively kill Unreal Engine development for the platform and strand numerous iOS and macOS developers. Microsoft’s court brief underscores this fact and the potential impact of Apple’s threat.

If Apple moves ahead with its current course of action, it will impact many, many more companies than just Epic and Microsoft. However, if Apple backs down, its walled garden is gone … as is the 30% it charges for all payments processed on its App Store.

Clearly, Apple can’t back down. After all, services revenue was $13.16 billion last quarter. And, after the spectacle it has created surrounding its fight with Apple, neither can Epic.

I’m not a legal eagle, so I’m not going to speculate on who will win this epic war. But one thing is for certain. This fight is going to get ugly.

I bet you thought earnings season was over. Well, you’re right … mostly, anyway.

There are however a few key reports sliding in this week that are worth keeping an eye out for. So, let’s dive once more into the breach and check in with Earnings Whispers: 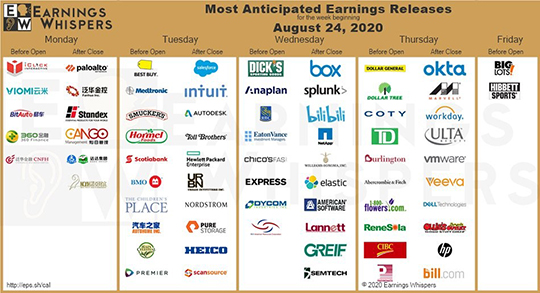 Compared to the past month, this week’s list is nearly as bare as Old Mother Hubbard’s cupboard. Here are the highlights:

Great Stuff Won’t Back Down

As always, we are dedicated to keeping this market from pushing you around. So, why not drop us a line at GreatStuffToday@banyanhill.com? Let us know how we can help keep you afloat in the current market madness. Or, you know, just send us song recommendations. It’s all good.