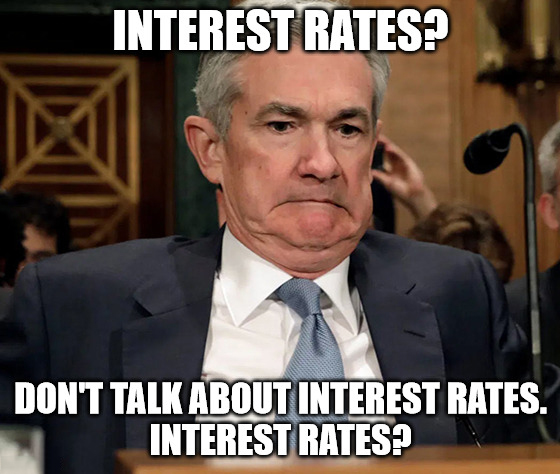 Y’all were a bit quieter this week. I hope you’re feelin’ all right. I’m feelin’ pretty good myself.

But it seems Wall Street’s got to have a change of scene. Cause every day, it has the strangest dreams. Imprisoned by the way it could have been. The economy’s left on its own, it seems.

Yes, I channeled a little bit of Joe Cocker on the turntable today. You feelin’ all right? Does anyone else know more than just the refrain to this song?

So many questions today, and I’m not just talking song lyrics. Is the economy recovering or tanking? Is Apple Inc. (Nasdaq: AAPL) a $2 trillion company or not? Will anyone ever actually listen to the Fed?

Apple made history yesterday by becoming the first U.S. company to reach a $2 trillion valuation. Or did it? It seems that Apple’s aggressive share repurchase program might have undermined that record.

I’m just kidding. He boosted the company’s stock buyback program by $10 billion to $30 billion. I wonder how much of an impact that $30 billion would have had if Intel had spent it on figuring out its production problems?

Remember last week when we celebrated weekly initial jobless claims falling below one million? Yeah, about that… We reversed course in the latest Labor Department data. New claims for unemployment benefits rose to 1.11 million in the week ending August 8. By itself, this report wouldn’t have had too much of an impact on Wall Street. However…

According to the FOMC, U.S. economic growth projections are “…somewhat less robust than in the previous forecast.” Richmond Fed President Thomas Barkin said that the U.S. was in a “very vulnerable spot.” I cringe just reading that understatement. Wall Street was similarly affected.

But, let’s be clear here. The Fed has said since the beginning that the U.S. economy wouldn’t recover from the pandemic anytime soon. It consistently makes it clear that U.S. economic growth depends on how we handle COVID-19 … and that includes continuing stimulus from the federal government.

The funny thing is, Wall Street actually expected the Fed to lift its economic outlook and start talking about interest rates. In his best Jim Mora impression, Fed Chairman Jerome Powell said he isn’t “even thinking about thinking about raising rates.”

That’s it for today’s market news. I know, we hit them fast and loose today, but that’s just how the volatility vulture circles.

But, before we go… You loved him in Peak Velocity Trader. You swooned (yes, swooned) over One Trade.

Click here to get in on this “don’t miss” research service of the year!

Now, let’s get right to answering your emails! If you haven’t written in yet, drop us a line at GreatStuffToday@banyanhill.com. We don’t bite … unless you ask nicely.

Gordon is up first to the virtual mic to lead us into the murky market talks. Dig in!

Subject: Prepped for the Fiscal Cliff?

JH, as above. With Inverse ETFs?

Here’s the thing about inverse exchange-traded funds (ETFs), they make for great portfolio hedges — specifically, the Great Stuff Picks’ recommendation for the ProShares Short S&P 500 Trust (NYSE: SH), which we bought back in the March maelstrom.

Hedges are kind of like plungers: No one’s amped up about buying a plunger for their new place. But you better believe that, when the $^%&storm starts rising, you’ll want to already have your plunger at the ready.

Are we still talking about portfolios here?

Yes, because so far, the market’s rising sewage water (if you want to keep with the horrible analogy) hasn’t reached the brim of spilling over quite yet. As of right now, our position in SH is down 33%.

Now, I both like and don’t like that our position on this inverse S&P 500 ETF is down. I don’t like it because we should’ve already had the correction that prompted this hedge … and we’re down 33%.

Now, the upside of being down on a hedge? It means we haven’t had to use this position to recover investment capital. The market is still going up, which means the rest of our portfolio is doing well … and that makes me happy!

Our position in Advanced Micro Devices Inc. (Nasdaq: AMD) is up 177% since our June 18, 2019, recommendation. Both Wix.com Ltd. (Nasdaq: WIX) and CrowdStrike Holdings Inc. (Nasdaq: CRWD) teeter on the triple-digit threshold since we bought into the web-building pro and the web security expert, respectively.

I do fear that we may need to use this “policy” soon, though. Especially after the Fed minutes and worsening economic data. Wall Street can’t ignore Main Street forever, no matter how doped up on Fed stimulus they are.

Déjà Vu, I’ve Just Been in This Trade Before

Deja vu, all over again.

Kodak invented digital photography, but refused to really develop it because it would have displaced its film products, which were its bread and butter.

Swiss watch-makers developed quartz watches, but failed to develop them, because their product lines would have suffered.

And now GM knows that EVs are the future of cars, but can’t bear to develop products that might cut into their profitable pickup truck line? I don’t think I’ll be adding GM to my IRA, to say the least.

Taking the easy way out is just a way out — not a way forward. And GM knows that straying from its safe zone to develop an equally profitable line of electric trucks would mean *gasp* hard work and a priority on research and development.

I agree with you, Gordon. GM is just too hopped up on those oh-so-profitable and never-impressive hulking pickups — the Pavement Princess special. We’re talking those city and suburb dwellers with the Sierra 3500HD dualies, not the boys down on the farm who actually need them. It’s those same big-margin monstrosities that we can at least partially blame for the death of the compact pickup, but I digress.

So, what’s the worst case of “sell tomorrow for today” you’ve ever seen in the markets, reader? In other words, have you ever seen a perfectly reasonable brand shoot itself in the foot over and over and over again?

As investors, we have to be acutely aware of how businesses shape up with growing trends or ship out with dying ones. Tech expert Ian King actually focuses on this exact way of looking at the markets, day in and day out. Click here to see how!

Hi, what ever happened to DKMR?? I bought and it tanked. Is it ever coming back up? You had said it would go to 10 bucks, but instead it sank to 2 something and then dropped and hasn’t recovered. I’m at a huge loss so curious if you still think it will go up or am I just out that money?

What’s the deal with DKMR? They were way up and then they dropped and have not recovered yet, any ideas as to what happened to them??? 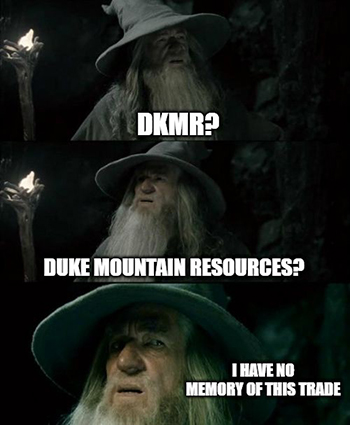 Great Stuff reader, embark on this mystery with me. Anyone ever hear of Duke Mountain Resources Inc. (OTC: DKMR)? Ideally … anyone remember us talking about it in Great Stuff?

I know it’s been a bit of a memory blur these last few months, but we’ve scoured the archives for mentions of DKMR. (Impossible, perhaps the archives are incomplete?)

Where did you come from, DKMR? Where will you go, besides penny stock territory?

In all seriousness, Olivia and David, I’m sorry that you’re getting crushed under this. Since this particular tiny gold stock isn’t our recommendation… I’m not going to tell you how to proceed (legalities and whatnot).

But I want to heavily encourage you to trust your gut if your risk tolerance Spidey senses are kicking in.

Ephemeral advice aside, this is what seems to be a very illiquid trade, since these over-the-counter stocks hardly see any action at all. Well … until someone stumbles upon it, such as a certain Hobbit finding a certain ring in the river Anduin.

I have followed Nikola since the IPO. I purchased some shares shortly after the IPO and sold them for a profit @ $68. I have now purchased Nikola Warrants NKLAW and will hold them for the long haul as I have until 2025 to execute them. I am also invested in other EV stocks as I believe the sector has tremendous upside.

Great to hear from you again! I just wanted to give you a quick shoutout. See, we’re out here prepping for the rest of 2020, but my home skillet biscuit, Dick?

Dick’s moved far beyond this peon timeline to invest in 2025. It’s rare to congratulate someone on their warrants where I’m from, but good on you, Dick.

That’s another day of Reader Feedback in the books, and I appreciate every single one of you who wrote in!

Whether you’re a first-time writer or a long-time ranter, we look forward to every single email. (Hi, Gary C., I hope you’re doing well out there!)

So if you have any questions, hot takes or vaguely worded advice for us, feel free to write in! GreatStuffToday@banyanhill.com is the spot for you to tell your opinion like it is — the profane, the vain and the surprisingly wholesome.

I hope to see your email in next week’s issue! Don’t forget about that “Strike Zone” strategy we talked about — seriously. It’s not like you get a missile architect teaching you about Strike Zone trading every day… 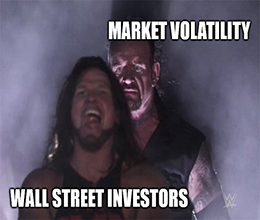