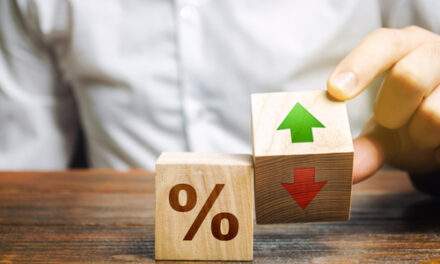 Inflation is soaring…Interest rates are rising…Treasury bond prices are falling…And none of this should be any surprise.I began warning you about these conditions back in June. But this wouldn’t be “The #1 Options Trading Newsletter in the World” if all I did was warn you.So I also recommended a trade to play it — put options on iShares 20+ Year Treasury Bond ETF (TLT).The trade is now up about 26% from my recommendation. A few longtime readers have written in asking for an update, so I’ll give one today.But even more important, I’ll show you how I found such a “no-brainer” trade setup so easily.Read this issue today closely, and you’ll see that such easy money isn’t all that hard to find… Once you know where (and how) to look.

How to Find No-Brainer Bond Trades

The January 23, 2023 $145 put is trading for about $19. That’s up from about $15 when I originally recommended the trade.But it’s not time to close yet. We know this trade is going to continue profiting until 2023.The reason we know this is because, now that the Fed is committed to fighting inflation, interest rates have to go up.Not may, not could. They have to.When interest rates go up, the value of bonds will fall.I understand why people hesitate to trade bonds. Bond math is complex. But we don’t need to get into the details to find trading opportunities.With a simple calculation called duration, we can see how much the price of a bond should fall when interest rates go up by 1%.For TLT, duration is 18.9%. Every 1% rise in rates will result in about this much downside.Since we know the duration, all we need to do to estimate the potential move in TLT is forecast interest rates.The Federal Reserve is staring us in the face and telling us interest rates are going up. But, we don’t even need the Fed to say this. Forecasting interest rates is another complex math problem with a straightforward solution.

Another Reason to Bank on TLT Puts

TLT owns Treasury bonds. There is no risk with these bonds because they’re backed by the government. You’re guaranteed to get your money back.The return on investment is your profit for lending money to the government. For centuries, this was between 3% to 5%.After the Fed defeated inflation in the 1980s, this factor, known as the natural rate of interest or r-star, started falling. It averaged 2.5% in the 1990s and early 2000s.Then the Fed started its quantitative easing programs and r-star fell to about 0.5%. A lower r-star is one reason interest rates are low now.The inflation factor is equal to inflation expectations. Consumers believed the Fed would keep inflation near 2% for about the last 15 years. Now, consumers are worried, and expectations are rising. The latest Fed data indicates this is 3.8%.Adding that up, the interest rate on long-term bonds should be 4.3% or more. The current rate on 20-year notes is 2.6%. This tells us TLT should decline by 32%.That’s before we factor in higher inflation from the war in Ukraine, sanctions on Russia, and supply chain stress associated with that.I won’t try to quantify that because we’re traders, not economists. We can see from the data we have today that put options on TLT are a great trade.Though, that isn’t to say there’s zero risk in this trade. There is, it’s just small. And it’s important to understand and assess the risk involved in any trade.The key data that could slow this trade down is inflation expectations — rather than actual inflation.Consumers could suddenly become optimistic, and inflation expectations would fall. That could potentially slow the Fed’s pace of raising interest rates, meaning TLT won’t fall as fast or pay out as much as we’d like by January.The bottom line is, if you’re not already in this trade, you’re missing out on the easiest money in the options market right now. It’s almost certain that TLT will fall much, much further from here.My price target for the TLT Jan 2023 $145 puts is still $57. That’s a 200% gain from where it’s at today.Bet on the Fed and continue trading put options on TLT dated out to next year.Regards,

Chart of the Day:The Breakout We’ve All Been Waiting For 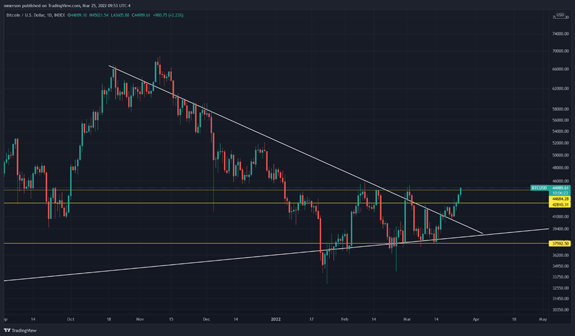 Calling it now… We’re seeing the early days of the next major leg up for bitcoin and crypto.As we speak, bitcoin is breaking above a key level around $45k. Every time we’ve reached this level this year, the price has soundly rejected it and retraced to gradually higher lows in the upper 30s.Bitcoin really just needs to close this week strong above $45k. If we can print a filled candle at this level, it’ll give the bulls the confidence to truly get bitcoin back into an uptrend.It’s possible we fall apart here and revisit the rising trendline, which would take us all the way back to $40k-ish. But I just think that’s unlikely at this point.Bet on crypto these next few months. New highs are on the table. Blink and you’ll miss the ride.Regards, 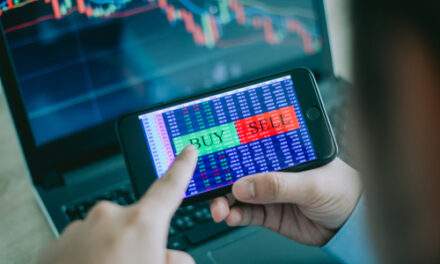 Bank It or Tank It: 4/5 of Your Favorite Stocks Are a BUY