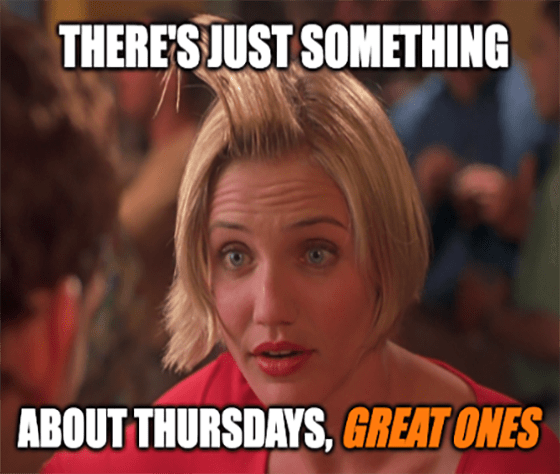 I did on Monday, tried on Tuesday.

But Wednesday’s a wild one for me.

But Thursday? Now, that’s such a crazy, hazy day…

When the market won’t let you be.

Is that … some diluted Harry Nilsson my elf eyes see?

Oh, you’re good, Great Ones. Almost too good. I’ve really gotta step up my lyrical acrobatics to sneak songs past you lot these days…

Anyway, like Mary, there’s just something about Thursdays. Time starts moving a little faster, the hours start slipping into the future … and even though the sun’s still rising, it may as well be five o’clock.

Call it an early, interdepartmental happy hour with our financial friends over at BanyanHill.com…

Whatever you want to call it, the Great Stuff team is on a time crunch today. And that means we’re stuffing your normal, family-sized helping of Greatness into a bite-sized serving of stock stories.

So, let’s end this pitter-patter and get at ‘er, shall we? 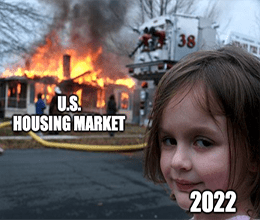 It seems like only yesterday we were talking about the latest housing market mayhem hampering home sales and new construction.

The construction company called out all the usual suspects for its suspect quarterly results, including supply chain issues and labor force failures “[that] extended our build times and delayed completions and planned deliveries.”

Speaking of those deliveries, KB Home only managed to complete 2,868 houses — leagues lower than its 3,168 projection. In fact, if it wasn’t for the average selling price of KB Home’s … erm, homes rising 22% this past quarter, the company likely would’ve been in much hotter water with Wall Street.

As it stands, KB Home just barely missed Bloomberg analysts’ $1.49 billion revenue estimates — instead bringing in $1.4 billion for the quarter.

If you’ve been looking for a different way to invest in real estate that doesn’t involve buying overpriced properties … then we’ve got just the Great Stuff you need.

Fundrise is a crowdfunding company we partnered with that lets you invest in real estate in a more low-cost way than was ever previously possible. Think “value investing” paired with commercial and residential properties … all from one convenient platform.

Omicron sales slumps are back on the menu, boys — at least if you’re Darden Restaurants (NYSE: DRI), parent company of Olive Garden, Longhorn Steakhouse and other restaurants frequently found on the outskirts of mall parking lots. (Hey, I don’t judge.)

Darden said Omicron took a big bite out of the company’s earnings and revenue this past quarter, accounting for its rather unappetizing report.

Here’s a look at those numbers:

I mean, if even the heavenly scent of garlic-coated breadsticks can’t lure customers out of their COVID-19 caves … how well do you think Darden and its merry bunch of restaurant chains will fare now that inflation is on the rise and food costs keep climbing?

Probably not too well, which is why the company’s already lowering its fiscal 2022 outlook. Darden dropped its sales forecast to between $9.55 billion and $9.62 billion, down from its prior range of $9.55 billion to $9.7 billion. 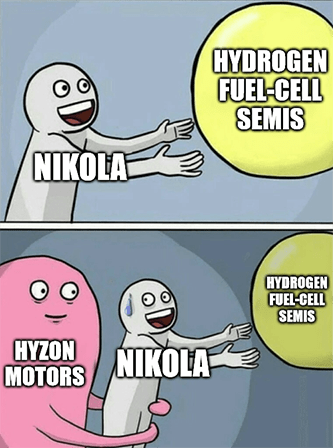 It’s official! Yesterday, Nikola (Nasdaq: NKLA) announced it had started production of a battery-powered version of its electric Tre semitruck, with deliveries set to begin in the second quarter of 2022.

For those of you rolling your eyes right now thinking the electric vehicle (EV) market is already crowded enough … you know who you are … may I remind you that Nikola isn’t like other EV makers out there.

It’s special, in that it solely focuses on the semitruck and light-duty truck markets. You know … the vehicles the U.S. economy essentially runs on?

Other EV companies are already clamoring to get into this underdeveloped market *cough Tesla cough*. But Nikola stuck it to the naysayers by launching its semi lineup first … if for no other reason than to get under the Musk Man’s skin.

It does … or rather will, eventually, probably make a hydrogen fuel-cell truck. But not today. Maybe in a few years, we hope.

The short-range, battery-powered semi model was made with roughly 350-mile routes in mind. Nikola still plans to produce longer-range, hydrogen fuel-cell vehicles that can drive up to 900 miles on a single charge, but not until about 2025.

So, no real hydrogen hype for Nikola today, but at least it does have something to show investors. If you want real hydrogen power hype, check out yesterday’s earnings from Hyzon Motors (Nasdaq: HYZN), which is already making real hydrogen fuel-cell semitrucks. Take that Nikola.

Now, hold your horses just a minute here. What if I’m still not sold on all this hydrogen hoopla?

Well… We could always downshift into Duracell AAs, but your mileage will vary considerably. Or, instead, you could click here to see what else is shaking down on Electric Avenue.

If The Lululemon Shoe Fits?

We’re scraping the bottom of the news barrel with this last one, but in case you haven’t heard: Lululemon’s (Nasdaq: LULU) new sneaker collection hit stores this week … so now your entire athleisure wardrobe can be wildly overpriced.

Nike, Adidas … do you know them?

I’m pretty sure by “unmet needs,” McDonald really meant “unexplored markets for Lululemon to tap into,” but either way, these $148 Blissfeel running shoes could act as a key growth driver for the comfy clothing retailer.

Sneaker sales have soared since the start of the pandemic, with people working from home opting for comfort over optics. It’s a trend that’s seemed to stick, even as white-collar workers grudgingly go back to office life.

While LULU stock barely budged following Blissfeel’s launch … I say we give investors time to break in these new designer digs before dissing them altogether.

And that’s a wrap for today, Great Ones! If you’re still itching to let your words fly and rant like the wind, join us over in the Great Stuff inbox. 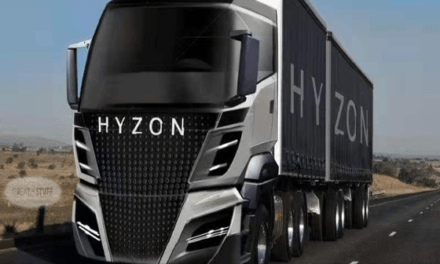 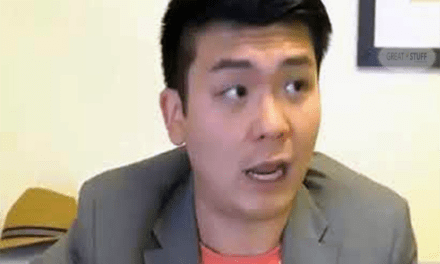