My Favorite Trade for a Volatile Oil Market 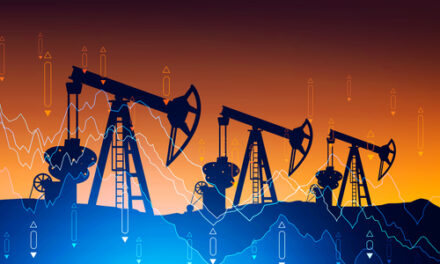 On Monday, crude oil prices moved above $80 a barrel. This is the first time oil’s been that high since October 2014, when the oil shale boom was beginning to push prices lower.

It is possible oil prices could drop from here. After all, the cure for high prices is high prices. If higher oil prices cause demand to drop, that could send prices lower.

On the other hand, it’s possible that demand will continue to rise as the economy recovers. Supply is unlikely to expand significantly as OPEC has kept a lid on production and new regulations limit drilling in the U.S.

Although the path of oil prices is uncertain, the future direction of prices is likely to be volatile…

As I’ve written before, options can also be used to trade volatility when you don’t have any opinion on the direction of the price move. A straddle is one way to do that.

(Did you follow my previous straddle recommendation back in July? Let me know how it went by writing TrueOptions@BanyanHill.com.)

A long straddle involves buying both a call and a put, both with the same strike price and expiration. This trade delivers a profit if prices make a big move either up or down. The maximum loss is limited to the amount paid to open the trade.

United States Oil Fund, LP (USO) is an exchange-traded security that holds oil futures. It’s not an exchange-traded fund, or ETF, but is similar to that structure. USO is a partnership and generates extra tax forms for buy-and-hold investors. Options bypass that issue.

Straddles are often used by trading professionals when they see volatility ahead but can see the argument for either a rally or decline.

It’s a useful strategy for commodities — which can make large moves, but carry a high degree of risk. If we trade oil futures directly, we could lose more than 100% of the amount we invest.

With a straddle, we can never lose more than we pay to enter the trade. On this trade, that is $850 since each contract covers 100 shares.

While individual traders generally haven’t used this strategy, straddles are a useful tool to trade the markets when risks are high as they are now in oil. 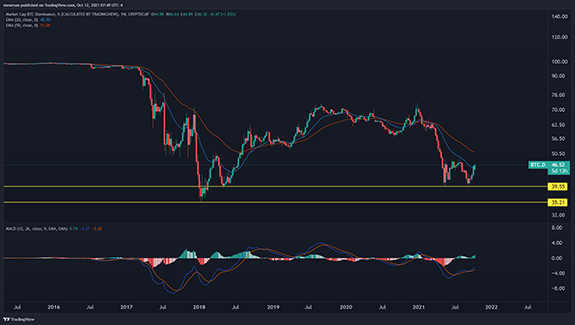 Bitcoin is about to steal the whole crypto show… for a while anyway.

That’s the sense I get from looking at BTC.D, a chart that shows the percentage of bitcoin dominance in the overall crypto market.

As you can see above, bitcoin was basically 100% of the crypto market for many years, until 2017. Then BTC.D fell off a cliff as the era of the altcoin began.

But we can also see that bitcoin dominance surged from its lows at the beginning of 2018, as most altcoins fell 80-90% during the initial shock of the bear market. Bitcoin then reclaimed much of its dominance as time went on — it held its value better than alts.

Now, fast forward to today. It’s the 2021 crypto bull market and alts are once again all the rage. BTC.D is hanging out near its lows, but stubbornly will not break the 39.5 level. In fact, we have a shorter-term double bottom and a longer-term triple bottom on this chart.

So what’s all this mean? Well, in my view, bitcoin is about to be dominant once again. I foresee bitcoin surprising everyone over the next few months, cracking six digits likely before the year is out.

But what’s different this time is this is probably not coinciding with a bear market. Alts will rise too, just not nearly as fast as BTC.

And once every altcoin holder has capitulated into bitcoin — likely around the 58 level above — that’s likely about the time alts will start to rally hard and surprise everyone once again. 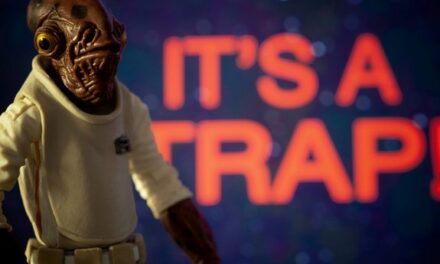 It’s a Growth Trap! Trust These 2 ETFs Instead