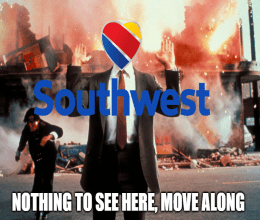 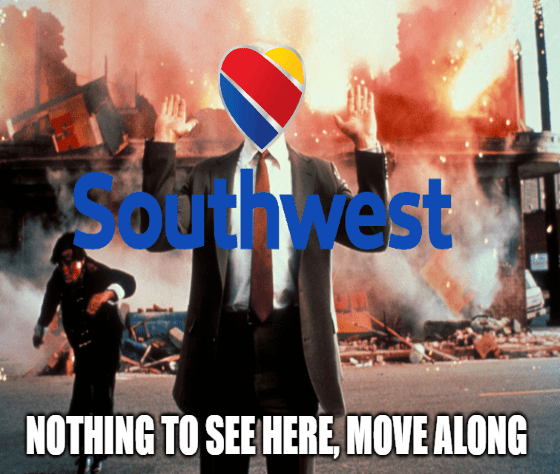 So good to me! You can fill in the “bah-da bah-da-da-das” in your heads as we go along.

Monday Monday was so good to pretty much the whole market from the get-go today … if you ignore Southwest Airlines  (NYSE: LUV). (More on that dumpster fire in a sec.)

All across the great wide market, Monday mornin’ was all I hoped it could be.

The “bloodbath” of weeks’ past gave way today to a sea of brilliant green. Something, something about rising tides and boats and earnings season optimism…

And then the afternoon came.

Like a food coma right after lunch, all the major indexes turned on their heels at noon and quickly sank into red … as if Wall Street suddenly remembered that Mondays are for negativity and negativity alone!

So much for the sunniness of The Mamas & the Papas shaking off the funk … sometimes, it just turns out that way.

Nevertheless, we gathered the best of the bunch … the cream of the crop for today’s market romp. Buckle up, Great Ones. We’re jumping straight into the action now — Quick & Dirty style!

LUV The Way You Fly

Southwest Airlines investors are just gonna stand there and watch LUV stock burn. The airline was forced to cancel 1,800 flights over the weekend due to bad weather in Florida.

No passenger likes canceled flights (and you bet I’ll take a few vouchers for my troubles), but with complex chains of operations like airlines, one cancelation has a compounded run-on effect of stranding pilots who needed to fly on to the next stop, and the next and the next…

Unable to reposition its planes and pilots alike, Southwest was hamstrung and instantly went into damage control mode. Canceling flights was the strategic move here, but that didn’t stop the rumor mill from churning … especially if you’ve got nothing else to do but complain online while you wait at the terminal. 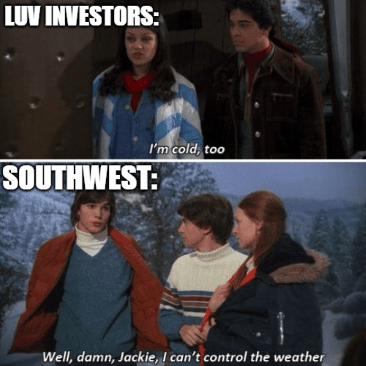 Speculation soon gripped the social media sphere, with many people wondering if the sudden cancellations were due to employee protests, be it about vaccine mandates or other hullabaloo in the unruly skies above.

Why the sudden speculation? Because none of the other major airlines were as affected by the “bad weather” as Southwest was. I mean, American Airlines only canceled 167 flights on Sunday and 41 flights today.

Considering Southwest boasted about restructuring its routes over the summer to improve its scheduling … it looks more and more like Southwest was just caught with its unorganized pants down.

While LUV stock crashed more than 3% amid the rumors, Southwest wants to make it abundantly clear that all the weekend’s canceled flights were only a ripple effect from Friday’s bad weather. Southwest states that its “pilots are not participating in any official or unofficial job actions.” They’re doing Bo-Diddley squat … which is why we’re in this mess, to be fair.

In all seriousness, if Southwest’s big brouhaha was simply an isolated incident where pilots and planes weren’t where they needed to be … LUV stock will be just fine. These things happen, unfortunately.

But if there is a bigger issue lurking behind Southwest’s cancellations — like, say, personnel problems, cash burn woes or further route scheduling $#!%-fests — it’ll be revealed in Southwest’s next quarterly report on October 21. And you bet we’ll be watching.

Hail To The King, Baby!

DraftKings (Nasdaq: DKNG) shares shot up 4% today after a fresh injection of that good ol’ analyst attention. Citigroup Analyst Jason Bazinet initiated coverage on DKNG stock today with a buy rating and a $66 price target — about a 34% upside even after today’s rally.

Citi’s already praising DraftKings as the market leader in betting, adding that the company is “well-placed to capitalize on market consolidation and user expansion.”

Considering we just talked about DraftKing’s attempts to steal British gaming company Entain out from under MGM’s clutches … and its August buyout for Golden Nugget Online Gaming … I’d say DraftKing’s consolidation attempts have been underway for some time now.

Congrats for catching up with last month’s news, Citigroup!

Oh, Robinhood (Nasdaq: HOOD). For a company that literally lives or dies by the sword of investor sentiment, Robinhood really needs to learn about proper timing and communication. But the GME debacle didn’t teach Robinhood anything about how not to communicate with investors, so … here we are. 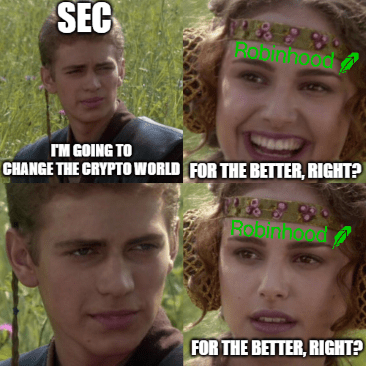 The brokerage is looking to speed up a previously announced stock sale (don’t freak out just yet). In its amended filing on Friday, Robinhood also talked up the extreme risks it faces with payment for order flow (PFOF) and crypto now coming under regulatory scrutiny.

As we’ve said before, whether or not anything meaningful comes of the SEC’s rant-laden urges to regulate crypto and PFOF remains to be seen. But at least this answers the question of whether or not Robinhood’s worried about its sweet, sweet PFOF revenue coming under fire. And boy, is Robinhood worried.

That’s a big question mark to work out still. And it’s Robinhood’s entire future. Let’s not forget that we’re talking about a brokerage that literally just figured out how phone support works … like, last week. HOOD shares dropped about 2% on the open today but quickly recovered.

And in Apple’s (Nasdaq: AAPL) Epic war, the only thing left to do is stall, stall, stall.

Epic lost its fight to put its own app store on iOS, but it won the fight that developers actually wanted: letting people pay outside Apple’s app store, circumventing Apple’s 15% to 30% cut.

Set to go into effect on December 9, mandating alternative payment options would essentially kill one of Apple’s biggest profit engines. And y’all know Apple wasn’t just going to roll over when it comes to revenue.

Apple would rather spend years in a prolonged legal fight than get a light envelope from App Store devs. So, Tim Cook and company filed a notice of appeal and asked judges to stay the injunction. If the stay is granted, the new App Store payment rules won’t take effect until after Apple’s appeals process is over, which could take years.

Apple knows that if it can’t win its fight against Epic and alternate payment options … it can at least count on the slow-as-molasses cogs of the legal system. Oh, and don’t forget that Apple’s doing this, of course, for your protection:

Because we all know the best thing for consumers is fewer ways to pay, right? The only thing this rule would harm is iOS platform’s revenue … “more generally.”

Apple knows the inevitable is coming … that it will soon have to offer App Store developers actual choices of payment structures, not the illusion of choice. That app-making barbarians are at the gate of Apple’s walled garden of ever-increasing store revenue.

What do you think, Great Ones? Will anything come of Apple’s appeal? Will Robinhood ever wean itself off of its precious PFOF? Were you affected by Southwest’s cancellations … or want to rant as if you were?

According to experts, Imperium is set to go from virtually unknown … to having 2 billion users in the next four years, launching a stock market gravy train almost nobody sees coming.

Click here now to discover details of the No. 1 Imperium investment.

It’s the Great Earnings Season, rising up out of the pumpkin patch! *Groans of disappointment.*

I don’t know about you, but we here at Great Stuff HQ have long looked forward to earnings season’s arrival — I hope it brings me lots of presents. And oh joy, the time is nigh for some rip-roaring reportin’ fun.

Let’s take a look at what companies are slated to report this week, courtesy of Earnings Whispers over on Twitter: 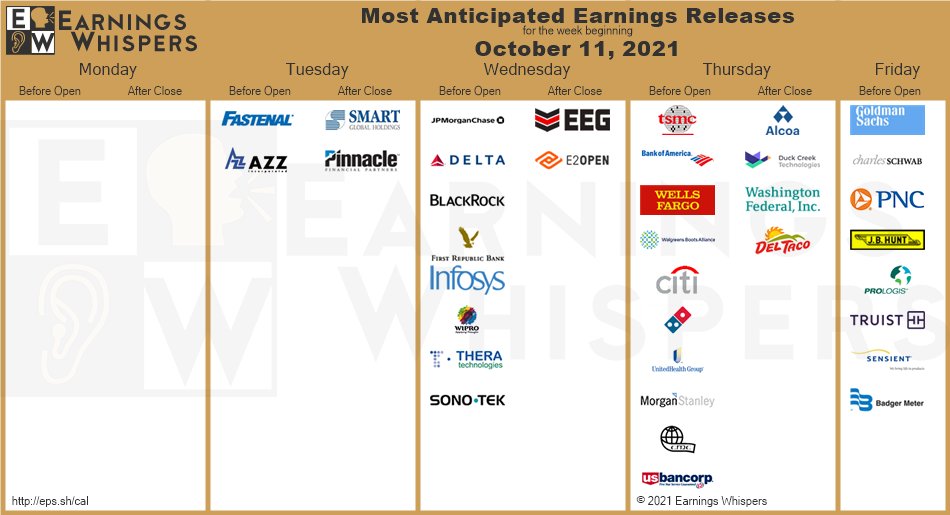 If you couldn’t tell, it’s financials week! The gang’s all here — from the big boy investment banks and retail banks down to, well, just about everyone else.

JPMorgan Chase (NYSE: JPM) and BlackRock (NYSE: BLK) are kicking off the bank parade this week, with Morgan Stanley (NYSE: MS) and Goldman Sachs (NYSE: GS) close behind in the second half of the week. What we’re looking for here is if the top traders managed to keep revenue a-flowin’ while the market volatility was a-growin’.

Then, we have Wells Fargo (NYSE: WFC), Bank of America (NYSE: BAC) and PNC Financial Services (NYSE: PNC) rounding out the more Main Street side of things. Of course, it wouldn’t be a complete banking round-up if we didn’t hear from a broker for good measure, and Charles Schwab (NYSE: SCHW) fits the bill this week.

I personally want to hear if Schwab’s just as worried about PFOF rule changes as Robinhood is … or if Schwab’s other myriad moneymaking methods mean it’s not all that bothered.

Up next into the earnings confessional: Delta Air Lines (NYSE: DAL). And just like every other pandemic earnings report from the head airline honchos, we want to know just how well Delta’s dealing with the whirlwind of COVID cases, burning cash, staffing shortages and … whatever else airlines worry about. (Cough, not in-flight wi-fi, apparently, cough.)

Thursday, we’ll get an update on the state of chip stocks from Taiwan Semiconductor (NYSE: TSM) — the chipmaker’s chipmaker. Sorry, TSM, we’re more interested in the company’s insights on the broader chipmaking market rather than Taiwan Semi itself.

One oddball I’m looking out for this week is Domino’s Pizza (NYSE: DPZ) … and not just because I skipped lunch. The reactions to Domino’s reports are as unpredictable as its food delivery. I’ve seen brilliant growth met with uneasy sell-offs, stinker reports take off like a shot and everything in between.

Between the underreactions and overreactions, the 2021 two-step might make an appearance once again this week.

And that’s all she wrote, Great Ones! Which reports are you watching this week? Do you have any earnings trades in your sights? (Options fiends, sound off!) 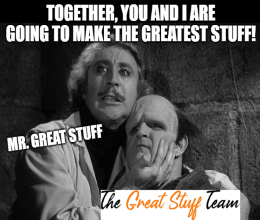 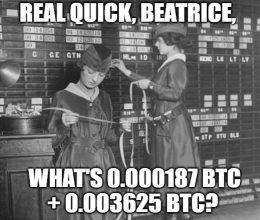