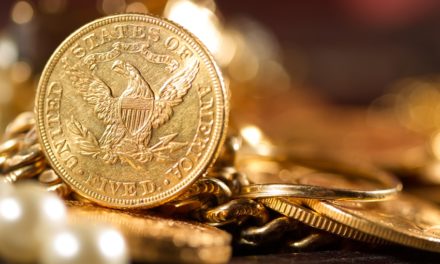 Gold’s rally has investors selling shares and taking profits … and that’s exactly the wrong thing to do right now.

See, at least one asset’s shares will double in the next 12 to 18 months as gold rises from here. I’m calling it now.

Gold’s rise is the first shot in what Sprott CEO Peter Grosskopf called: “The investment of the next decade, maybe the next 25 years.”

It’ll be the engine that sends gold stocks ripping higher — and that means profits for savvy investors ready to jump in now.

I know this because I attended the Sprott Natural Resource Symposium in Vancouver, British Columbia, last week.

For four days, I was immersed in the mining sector, discussing the economic forces pushing gold prices higher and more.

The result was like taking a refresher course in the gold industry.

It was great, and I can’t wait to do it again. But I came away certain that there is a huge disconnect between Wall Street and gold stocks.

We can see this happening by looking at the VanEck Vectors Gold Miners ETF (NYSE: GDX), which tracks a basket of gold miners.

That means the share count reveals a great indicator: sentiment around gold miners.

This chart shows you what I mean: 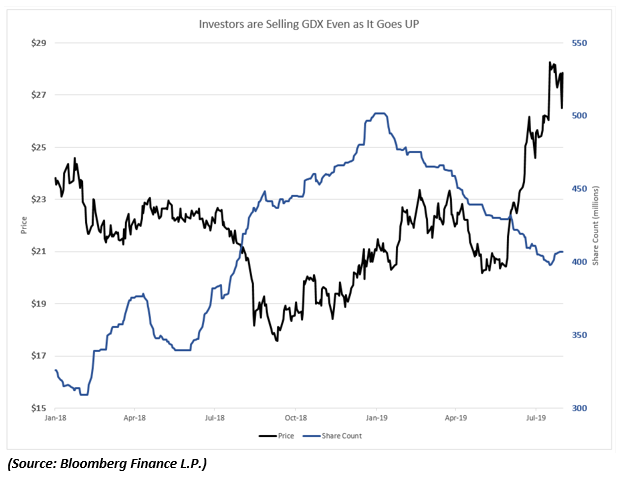 This chart shows the number of shares (the blue line) versus the share price (the black line).

As the share price climbed through 2018, the number of shares fell. Even as the uptrend turned into a steep climb, GDX’s share count continued to drop.

In other words, investors sold the rally in gold stocks.

The odd thing is, GDX isn’t hitting all-time highs or anything. In fact, it could easily double and still not reach its peak.

That’s great news for us, because it means that it’s early days in the gold rally.

After all, I expect GDX to double as gold’s price climbs higher. And there are three main reasons…

The value of gold is a measure of confidence in the U.S. dollar.

When the market feels confident about the dollar, gold falls. When there is less confidence in the dollar, the price of gold rises as investors run to the safe-haven investment.

There are three reasons to be wary of the U.S. dollar right now:

These all introduce concerns that things might not be as good next year as they are today. And so, the price of gold goes up.

According to Forbes, billionaire Sam Zell just announced that he bought gold for the first time ever. His quote was: “It is a good hedge.”

And he’s not the only billionaire buying, either. David Einhorn, founder of Greenlight Capital, and Jeffrey Gundlach, CEO of DoubleLine Capital, are both buying the precious metal.

And neither one is a “gold bug.” They’re buying insurance with gold.

I’m following the smart money — and so should you. Now is the time to buy gold and gold stocks.

Get on the rally with the VanEck Vectors Gold Miners ETF (NYSE: GDX).

P.S. I’ll be talking about a brand-new gold stock next month at this year’s Total Wealth Symposium , an annual investment event in beautiful Amelia Island, Florida.