What’s Going on With Italy!?

Investors were welcomed back from the three-day weekend with a disturbed Dow Jones Industrial Average.

The index sunk nearly 400 points on Tuesday alone. That was enough to shake some investors’ confidence since the markets have already been volatile lately.

The culprit behind the plunge wasn’t even from the United States.

It was actually from Italy. And it’s tied to worries about the country’s debt burden.

This may not sound like important news to many Americans.

We know that Europeans have had many issues tied to debt — Greece is an excellent example. And many fear Italy may head down a similiar path.

It seems like there has almost always been worries over the country’s debt and politics.

It is now reaching a boiling point.

Sometimes, like failing to pass a budget in the U.S., things get resolved swiftly. But for Italy, there seems to be no swift resolution.

We know this is a major concern because the yield on Italy’s 10-year bond jumped over 100 basis points and was at 2.92% on Wednesday. 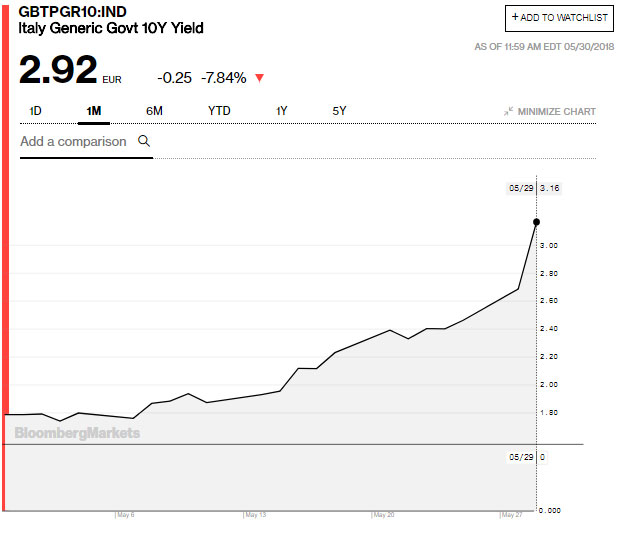 The bond market generally moves slow. Jumps of even a few basis points don’t come without some sort of news item.

But the yield just surged over 100 basis points immediately. This means it is something worth paying attention to.

Italy is set to schedule another vote, and all of this could settle down. But the risks if it can’t form a functioning government could be catastrophic. Not only for Europe and the European Union, but for the United States as well.

If you want more insights on what is going on in Europe, be sure to check out Ian King’s article from Thursday — he takes an in-depth look.

For now, we know this is something to keep on our radar and see how serious this becomes.

Not Even the Royal Family Is Safe From the IRS