Home » Economy » Europe’s Elites Cause yet Another Debt Panic

Since the financial crisis began a decade ago, European debt panics have been as common as international sporting events, appearing in a random euro zone country every few years.

The euro is the elite’s experiment gone wrong. Who would have imagined that countries with vastly different political regimes that have been warring with one another for two millennia could successfully share a common currency?

The Italian 10-year bond yield jumped 106 basis points to 2.83% as investors sought safer assets such as the German bund and the U.S. 10-year note.

Italians are headed for another vote, possibly as soon as July. The fear is that this vote will turn into a referendum on the euro, as Italians say: “Ciao.”

The financial media is already coining terms for the possible Italian withdrawal, such as “Italeave” or “Italexit.”

Uncertainty around Europe rattled global stock exchanges and will continue to be a concern until the vote (and possibly after).

Even famed investor George Soros is saying: “The European Union is in an existential crisis,” claiming “everything that could go wrong has gone wrong.”

How we got here should be no surprise.

European elites have always dreamed of a common currency. In 1999 it became a reality.

However, Europe’s unified monetary system has caused imbalances throughout Europe that continue to impact member’s economic and political climates.

The big problem was that European Central Bank (ECB) rules treated risk the same on all member countries’ debt, meaning margin rules applied the same to everyone. This allowed French and German banks to treat a Greek bond the same as a German bund, even though these were vastly different credits.

It’s like saying the guy who’s loaded with credit card debt and hasn’t made his mortgage payment in three months is as trustworthy as the guy with a perfect credit score.

What could have possibly gone wrong?

The following chart shows the convergence in interest rates throughout Europe. Fiscally unstable countries such as Greece and Spain suddenly were deemed as creditworthy as France and Germany: 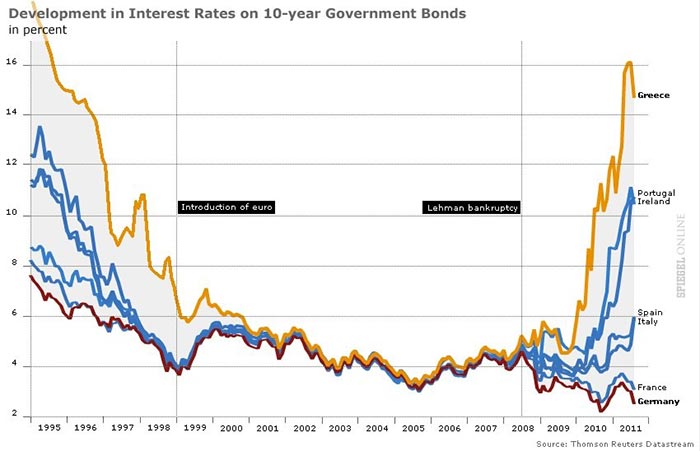 When someone puts free money on the table, most people take it. European politicians are no different — most of them would take money that isn’t even yet on the table.

As interest rates converged, this provided cover for unrestrained government spending in Portugal, Italy, Ireland, Greece and Spain (appropriately known as the PIIGS).

Alas, all good things come to an end, and they end even more abruptly when you’re spending money you can’t pay back. When the financial crisis hit, interest rates throughout Southern Europe spiked, and competitiveness mattered again.

Southern Europe, especially Greece, could no longer foot the bill racked up when housing markets were booming and times were good.

Higher interest rates compounded the problem of high debt levels as borrowing costs surged, creating a vicious cycle where governments are forced to take out even more debt at higher interest rates. And everyone threatened to leave.

In the past, European countries could swallow a bitter pill and devalue their currency to make their goods and labor force more competitive. A devaluation also allows a country to inflate away its debt as the country prints more domestic currency to pay back debtors.

However, the elites weren’t having any of this.

Playing by the Rules

In 2012, to stave off a dissolution of the euro (or at least delay it), ECB President Mario Draghi infamously said the ECB was prepared to do “whatever it takes.”

His speech led to the ECB’s program of Outright Monetary Transactions, where the central bank would commit to buy a member country’s one-to-three year debt as long as such country agreed to play by the ECB’s rules.

This kept rates low and served as a kind of quantitative easing for European governments.

Playing by the rules meant that southern countries would enact strict budget cuts, leading to higher unemployment rates in Spain, Greece and Italy. 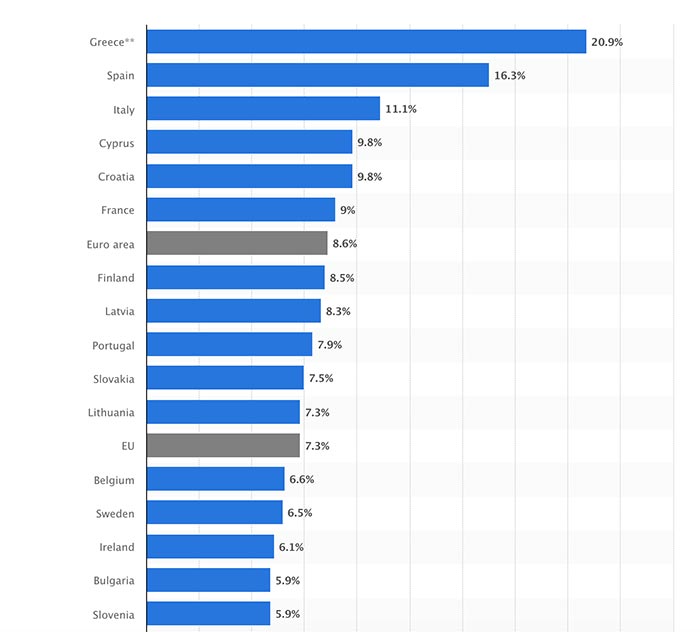 This is also leading to the rise of populist parties throughout the region who want to “Make _____ Great Again” by abandoning the euro and devaluing their new (old) currency.

The Euro’s Day of Reckoning

The choice is between sticking with the euro and appeasing the elites, or sticking it to the electorate with continued budget cuts, low growth and high unemployment.

Perhaps Italy chooses to remain and the fear subsides. And maybe this party is populist in name only.

However, if Italy’s economy continues on the same feeble path, the populist party that wrests control from this one will certainly be a few shades more radical.

It’s inevitable that the euro’s day of reckoning will someday come, as do all centrally planned institutions. For as Irish poet W.B. Yeats penned in the aftermath of World War I: “Things fall apart; the centre cannot hold.”

Editor’s Note: The ultrarich — people like George Soros, Warren Buffett and Mitt Romney — use their highly paid attorneys and accountants to live a lavish lifestyle. And until recently, you’ve likely been told this type of world is too expensive, too complicated and too dangerous for you to navigate. But financial expert Ted Bauman has revealed that not only is this type of life attainable for you … you can achieve it easier than you ever thought possible — no matter your age, income and education. To find out how, click here.

What’s Going on With Italy!?