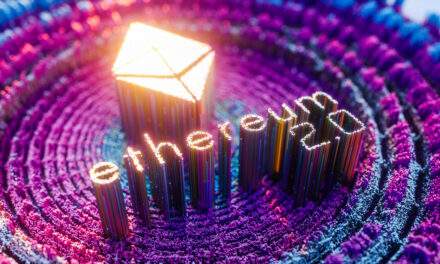 Next Thursday is the most critical turning point in crypto history.

Ethereum’s upcoming merge to ETH 2.0 is going to be bigger than October 31, 2008, when Satoshi Nakamoto published his first white paper on cryptocurrency…

More important even than the creation of bitcoin (BTC) itself back in January 2009.

I believe future generations will look back on September 15, 2022, not just as a watershed moment for cryptocurrency, but as a day that redefined our world forever.

They’ll remember it as the moment when cryptocurrency started taking over the $100 trillion global financial system.

Because even though cryptocurrency has already gone mainstream…

Even though 300 million-plus people are already using cryptocurrencies, with over $112 billion in daily trading volume…

We’re still only scratching the surface of its true potential. 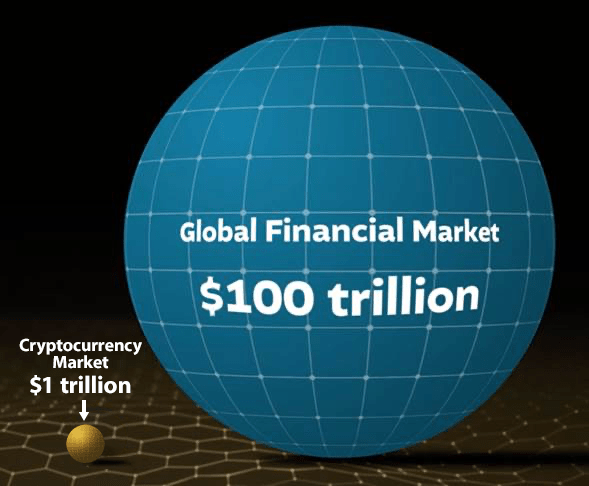 But all that changes next Thursday.

And you might be surprised to hear which cryptocurrency is leading this charge.

In fact, over the next 12 months, FSInsight believes the market cap of this Next Gen Coin will grow to eclipse that of bitcoin.

But we should be aiming much higher.

In fact, I believe this coin will eventually grow to 20 times the size of bitcoin.

And today, I’m going to show you how it will happen.

This means they give a sample version of the software (a “beta”) to a small group of users.

The users test it out and help them work out the bugs, ensuring things will run smoothly once they go “live” with their finished product. It’s the same principle as a dry run for sailors.

Well, Ethereum (ETH) has been in beta testing since its 2015 inception.

As the world’s second-largest cryptocurrency, Ethereum is already bigger than both Shell and McDonald’s with its $192 billion market cap.

And it’s still only in its testing phase, or “Ethereum 1.0,” as I often call it.

But that’s about to change in a BIG way…

On September 15, Ethereum will end its multiyear testing and upgrade process, finally evolving into the Next Gen platform it was always meant to be.

This is more than just a transformation.

Calling it a “revolution” doesn’t really do it justice.

I’ve been writing to my subscribers about this day for years. And as much as I try to describe the massive scope of it all, it’s quite hard to actually put it into perspective.

Netflix was revolutionary. It caught Hollywood off guard and disrupted the $29 billion entertainment industry.

Amazon did the same for retail, building a $1.29 trillion e-commerce juggernaut.

And Apple did it to cellphones, turning itself into a $2.4 trillion behemoth.

Yet these examples pale in comparison as Ethereum 2.0 moves to disrupt the $100 trillion global financial market.

The 3 Biggest Post-Upgrade Advantages of ETH 2.0

Today’s “Ethereum 1.0” is the world’s most popular blockchain.

But it’s still held back by some of the same problems as other popular cryptocurrencies.

Next Thursday’s upgrade is aimed squarely at overcoming these limitations and engineering the biggest breakthrough in crypto history.

When the dust finally settles, Ethereum will have three key advantages over not just other cryptocurrencies — but also over traditional financial institutions:

This has always been one of the biggest hurdles for major cryptocurrencies. 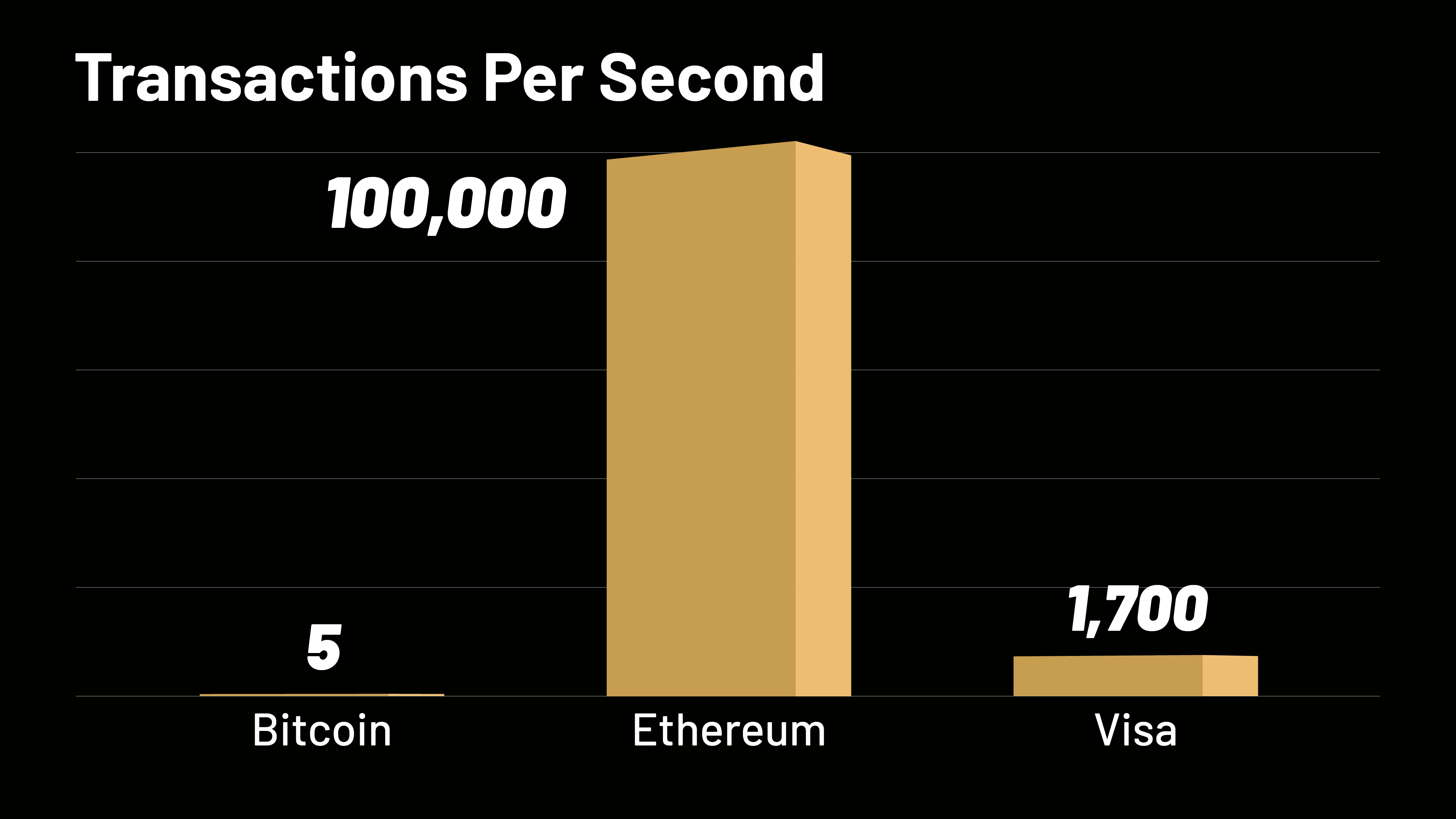 Credit card companies currently charge vendors between 2% and 3.5% every time you swipe your card.

It doesn’t seem like much when you’re grabbing a burger for lunch. But it adds up to over $100 billion in fees each year.

Visa and Mastercard realize crypto is an existential threat to their businesses.

That’s why both have been rushing to incorporate cryptocurrency before the big upgrade (as I pointed out in August).

But their customers keep turning to crypto, with active Ethereum addresses reaching an all-time high of 1.06 million just over a month ago.

It’s not just about consumers either.

But even with some of the best trading algorithms and the fastest computers in the world, they’re still bottlenecked by existing systems.

That’s why January saw the SEC approval of the world’s first blockchain-based stock exchange (the BSTX). It’s set to deliver faster settlement times and a secure blockchain feed for investors.

If successful, blockchain-based exchanges could become an irresistible advantage in the market for options and other assets.

The next key post-upgrade advantage is…

Bitcoin mining and transactions consume an outrageous 143 terawatts (TW) of energy each year. That’s more than the whole country of Norway, or roughly .55% of the world’s power supply.

Bitcoin consumes so much power that back in June, New York actually banned the practice of mining.

China and 17 other nations have enacted similar bans or limitations.

So in addition to rising energy costs and chip shortages, the bitcoin community now has to worry about regulators from all over the world.

Today, Ethereum’s power usage is comparable to bitcoin’s, at 112 TW. After the upgrade, power usage should drop by roughly 99.95%.

This will allow the network to scale up far faster at a tiny fraction of the cost — unleashing the true transformative power of Ethereum across borders, businesses and industries.

Which leads us to the third and most important part of the upgrade.

In the past, Ethereum has run on what’s called a “proof-of-work” (PoW) protocol like bitcoin.

PoW systems rely on high-end crypto mining computers to validate transactions and run the blockchain. In exchange for doing the work, miners are rewarded with fresh coins.

But as I mentioned, these kinds of systems are expensive and impractical to scale up any further.

That’s where “proof-of-stake” (PoS) comes in.

Instead of validating transactions with supercomputers and complex cryptography, PoS relies on consensus between stakeholders to maintain the blockchain.

With Ethereum’s new PoS Beacon Chain, anyone who stakes the minimum 32 ETH can participate. If you qualify, the system will randomly select you to validate transactions.

The process is completely automatic, allowing stakeholders to collect passive income just for holding one of the world’s hottest cryptocurrencies.

The system works like the crypto equivalent of a money market account — one that should yield 10% to 15% before rates eventually settle down.

You read that right.

As soon as next Thursday, Ethereum could become…

Staking on Ethereum’s new Beacon Chain will allow investors to collect as much as 7X the dividends offered by classic blue chips, such as Procter & Gamble, Coca-Cola and Pepsi.

But like all great income opportunities, I don’t expect this one to last forever.

As new investors pile in, staking rewards will shrink, probably settling at about 5% over the long term.

That income is great for investors, but it’s actually even better for Ethereum.

These crypto miners spend a fortune on their hardware and energy bills, so they often sell the coins they mine. That puts downward pressure on the price for Ethereum.

So if there’s not $18 million in demand that day in the market, prices will inevitably fall.

But with the transition to proof-of-stake, you’re suddenly dealing with stakeholders instead of miners, and their priorities will be vastly different.

Stakeholders will have a vested interest in holding for the long term.

And as a result, Press believes that Ethereum 2.0 will be far more resilient — requiring at least $300,000 in daily selling pressure for prices to drop, instead of $18 million in new demand to hold its ground.

You can already see how staking is transforming the way investors think about Ethereum.

According to Coinbase CFO Alesia Haas: “I think that once we have liquid staking available for the assets that institutions pooled in higher proportions, that’s when we’ll see the real material impact of institutional revenue.”

And the pace will keep picking up as the steady income from Beacon Chain staking starts to roll in. This could potentially drive Ethereum to global dominance, at 20X the market cap of bitcoin.

Bitcoin’s founder, Satoshi Nakamoto, was obsessed with the idea of creating digital gold.

He mentions the word “gold” no less than 66 times in his collected writings (yes, I counted).

And by all accounts, he succeeded with bitcoin:

Just like gold to the U.S. economy, bitcoin has played a crucial role in building up the world’s early crypto economy.

But where Nakamoto saw a world fighting to get back to the safety of the gold standard, Ethereum founder Vitalik Buterin has always looked to the future. He saw how crypto could surpass our existing economy.

This upgrade is the culmination of almost a decade’s worth of hard work for Buterin and his development team.

Buterin described the update by saying:

Let’s consider an analogy. Imagine Ethereum is a spaceship that isn’t quite ready for an interstellar voyage. With the Beacon Chain, the community has built a new engine and a hardened hull. After significant testing, it’s almost time to hot-swap the new engine for the old mid-flight. This will merge the new, more efficient engine into the existing ship, ready to put in some serious light-years and take on the universe.

This isn’t about what’s going to happen next week or next quarter.

It’s about a massive transformation that will take months and even years to truly sink in.

When Buterin says it’s not priced in, he means “not even just [in] market terms, but even psychological and narrative terms.”

That’s a polite way of saying the world is about to be blindsided by post-upgrade Ethereum.

And that’s coming from a man who already turned his “beta test” version of Ethereum 1.0 into a $192 billion cryptocurrency.

Ethereum will never take its place as “digital gold” because it was never meant to.

Not just as a cryptocurrency or an asset, but as a whole new framework that can truly deliver on the technological promise of cryptocurrency.

If you’d like to see more of my research on Ethereum — or if you’re wondering which cryptocurrencies are the best to buy in 2022 — then go here.

The Ethereum Merge Can Change the Crypto Landscape

All of my research points to Ethereum surpassing bitcoin as top crypto.

Did you know about Ethereum’s upcoming staking benefits?

Would you stake your own crypto for 5% to 15% returns? Would you like to hear more about how you can start?

Staking really changes the incentives for crypto owners. I’m curious about what it would do for your personal situation.

Send me an email to let me know at WinningInvestorDaily@BanyanHill.com. 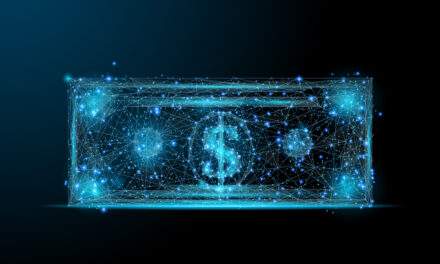