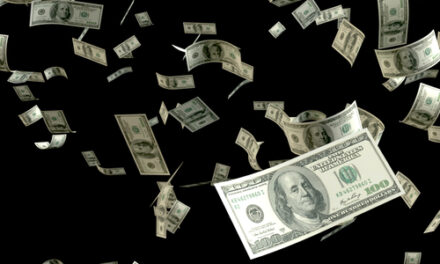 In 1992, the United Kingdom realized it made a catastrophic error.

The country entered the European Exchange Rate Mechanism (ERM), a predecessor to the euro, in October 1990. It was a way to keep European currency exchange rates in a narrow band, while still allowing each country to keep its own money.

ERM was good in theory. It would force European countries to maintain sound money, support economic growth, and reduce inflation (which was running hot in the UK).

It was also, however, poorly timed.

One infamous speculator took notice. And what followed was one of the biggest single-day payouts in trading history.

But you didn’t need high-level connections or a multibillion-dollar bankroll to profit on this trade. You just needed one line, which I’ll show you today…

As soon as the UK joined the ERM, West and East Germany reunited.

This one move effectively doomed the ERM experiment.

Politicians finally admitted defeat at 7 p.m. on September 16, 1992 — mere hours after George Soros cashed in $1 billion betting against the pound.

See, Soros saw it coming. He took a large short position in the British pound on September 15, 1992.

And by the close on September 16, after battling the Bank of England as they aggressively raised interest rates to deter bearish traders, he made $1 billion in a day.

Of course, Soros had an edge. He spoke to world leaders. He knew central bankers. He had a team of economists.

But you wouldn’t have needed any of that.

If you’d watched just one chart, you’d have placed the exact same trade…

Like all Big Money traders, Soros showed his hand when he shorted the British pound.

The chart below shows the Money Flow Index (MFI) charted against the pound. In August 1992, a strong bearish divergence formed as the pound topped: 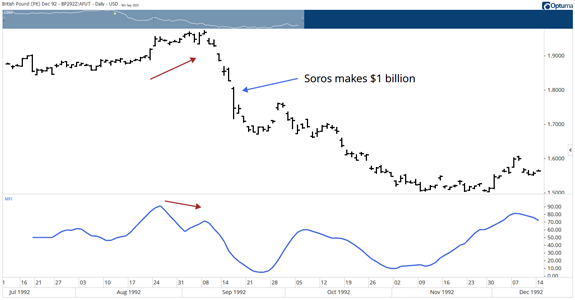 MFI is the blue line at the bottom. It tracks whether large traders are buying or selling.

The bearish divergence is marked by the two red arrows. As prices continued to rise in late August, MFI was falling. A clear sign that a market whale was selling the pound.

With these signals, you don’t need to know who or why. That news will break later. You simply piggyback on the trade — and, more often than not, land impressive short-term gains.

Andrew Keene knows this better than anyone. He made his entire fortune by tracking big traders in options markets.

He first discovered this edge in the 2008 crisis, and pocketed $3 million while the market crashed.

In the years since, he’s been perfecting his strategy…

And now, he’s using it to help small traders tackle this bear market. Members of Super Options have landed six triple-digit gains in 2022…

Let’s be honest — this bear market is probably just getting started.

If you want a bear master like Andrew by your side, click here and be first in line to learn more.