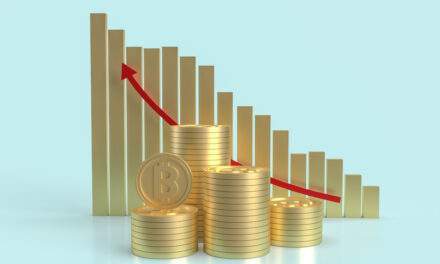 Editor’s Note: Ian King and the Winning Investor team are excited to deliver your first issue of Tomorrow’s Biggest Tech Trends Today. Instead of our usual article — as you’re about to see — we’ve made a big change. Starting today, and every Wednesday going forward, Ian will bring you an in-depth essay. Each essay will go into great detail on an exciting new technology or innovation that will shape our future. He will also reveal, in plain English, the economic impact these trends will have. So, you’ll be ready to pounce as investment opportunities arise. So enjoy today’s article on the future of crypto.

“Invest just one dollar in bitcoin!”

That’s what Davinci Jeremie told 3.9 million viewers in his viral YouTube video from 2013.

Looking back, this was one of the greatest recommendations of the decade.

But just a month before Jeremie posted the video, bitcoin had fallen 50%.

Most folks were convinced that it would not hold steady at $112 — and would instead plummet to $0.

If it goes to nothing, who cares? You only spent a dollar… The way I see it, that will be worth a million dollars just in inflation, once bitcoin gets to where it’s going to be.

But even more fascinating is his “take it or leave it” attitude:

A lot of you are skeptical, a lot of you don’t believe in the bitcoin system — that’s fine, you can stay on the sidelines.

If you’re familiar with crypto, you might be feeling déjà vu right now. And I’ll tell you why.

Jeremie was echoing Satoshi Nakamoto, the creator of bitcoin.

In his infamous whitepaper, Satoshi wrote:

If you don’t believe me or don’t get it, I don’t have the time to try to convince you, sorry.

Nakamoto and Jeremie were right.

These days Jeremie is doing quite well for himself, if this picture from his yacht is any indication: 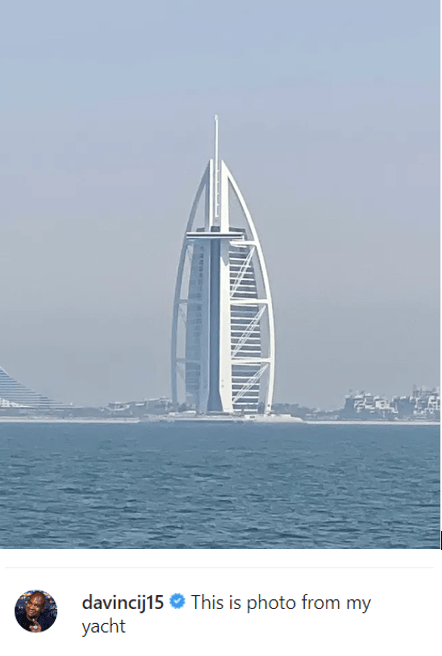 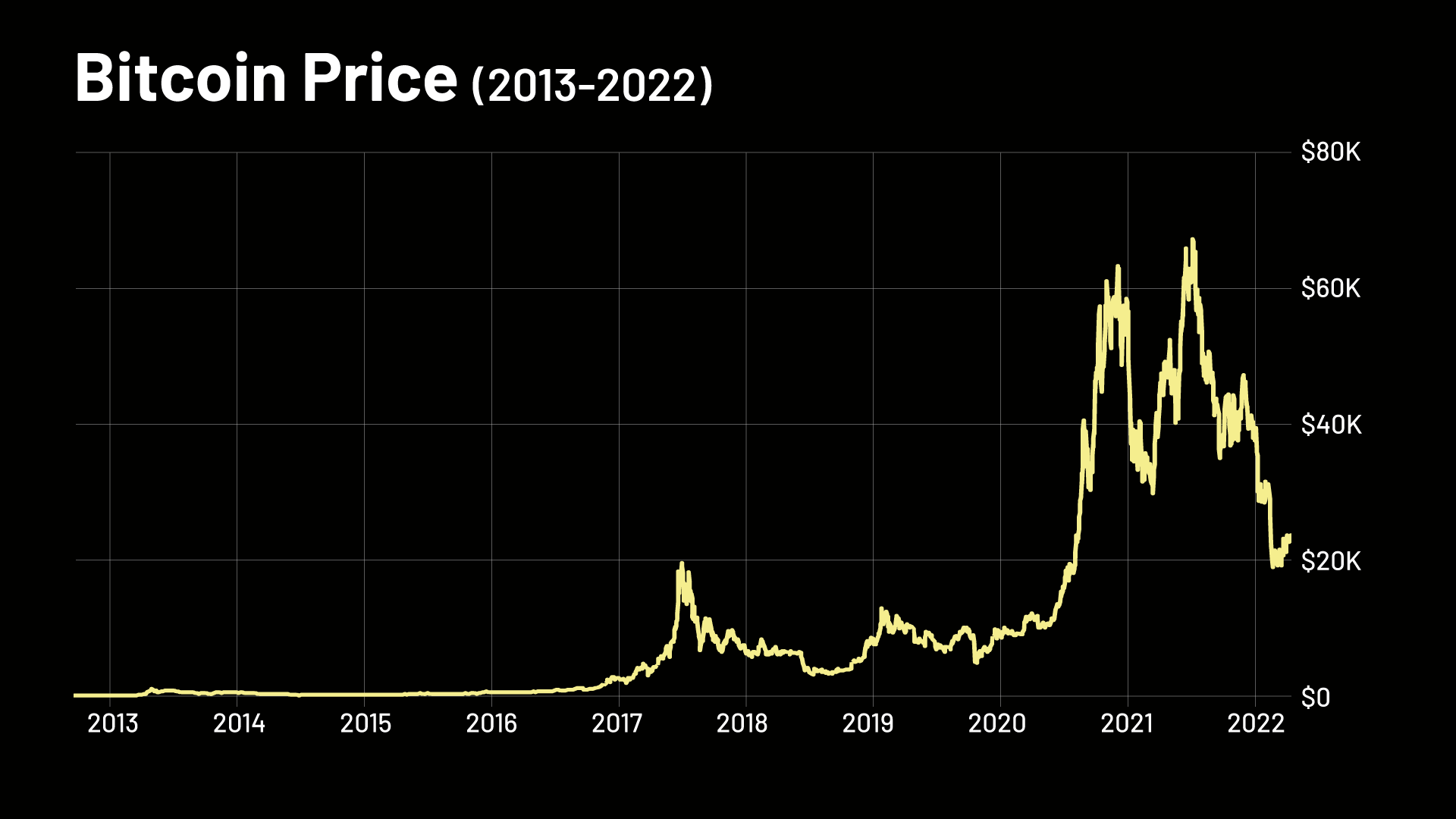 At the time, such gains were little more than a myth.

But those early gains? Well, they’re only a fraction of what’s coming from crypto’s next generation.

Here’s why I know that for a fact…

Like It or Not, Cryptos Are Here to Stay

In just over a decade, crypto rocketed from zero to over a trillion dollars in market capitalization.

Read that again. Zero. To. A. Trillion. Dollars.

That growth isn’t over.

That makes cryptocurrency the fastest-growing technology in history. 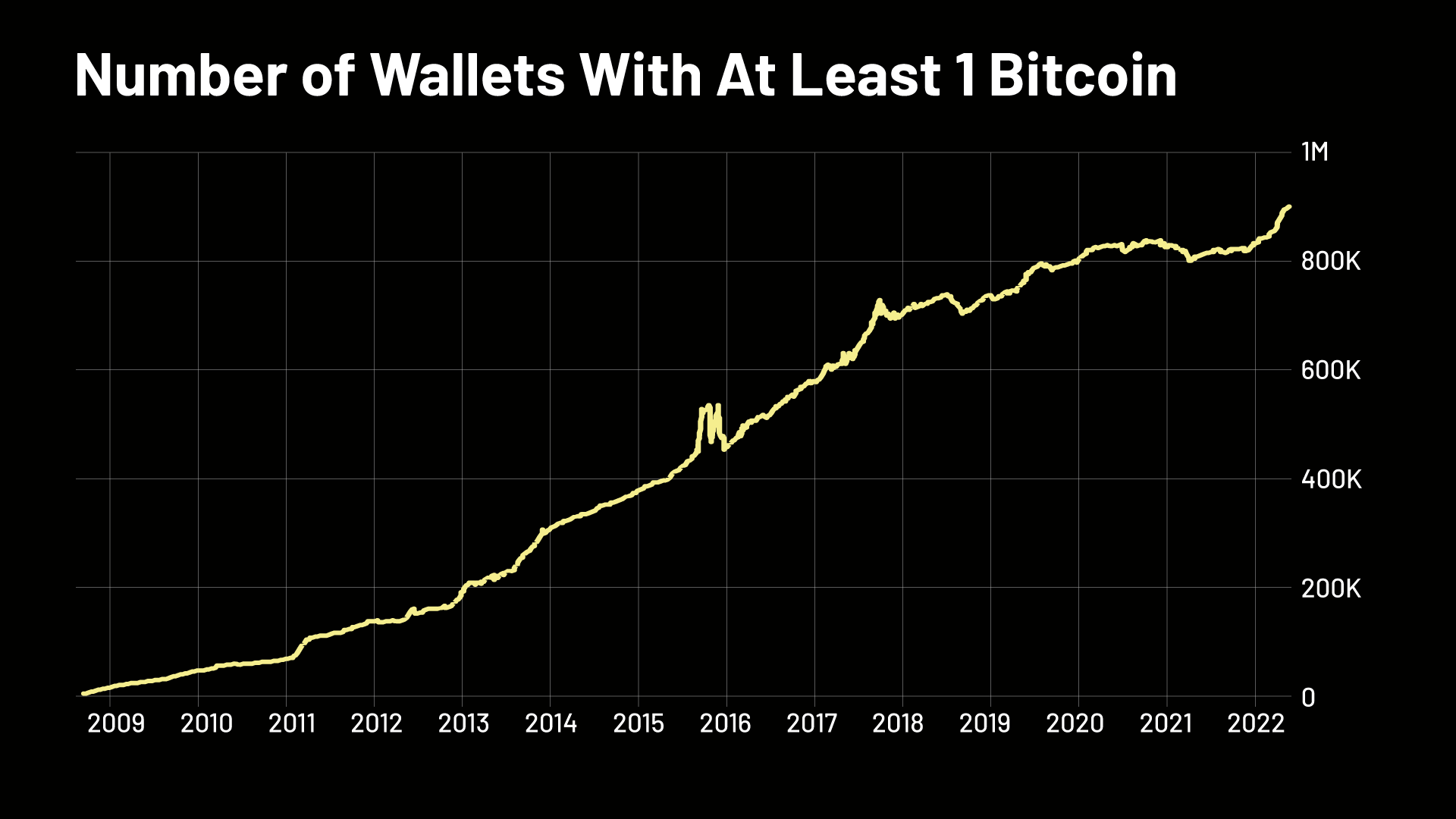 Crypto optimism is on the uptick.

In March, a poll found that 53% of Americans believe crypto is the “future of finance.” Moreover, that number rises to 68% among 35- to 44-year-olds. (As you know, it’s hard to find anything that more than 50% of Americans agree on!)

Even Wall Street is rushing to get onboard.

Blockchain technology isn’t just a more efficient way to settle securities. It will fundamentally change market structures, and maybe even the architecture of the internet itself.

JPMorgan Chase’s Jamie Dimon had to eat his words about crypto too.

Last October, Dimon bashed crypto as “worthless.” But in May of this year, just seven months later, he did a complete 180 and said bitcoin had “significant upside”:

I’m not a bitcoin supporter. I don’t care about bitcoin. I have no interest in it. On the other hand, clients are interested, and I don’t tell clients what to do.

BlackRock, with $9 trillion in assets under management, just inked a deal with Coinbase to give its clients access to crypto products.

Even stuffy old BNY Mellon, whose predecessor was founded back in 1784, has announced a new digital assets custody program.

It goes beyond Wall Street — Visa and Mastercard are now offering payment options for crypto users.

PayPal announced it would be offering crypto alternatives to its 350 million users last year.

Bottom line: Even those who once scoffed at crypto are now scrambling to adopt it.

Including intranetwork transactions, bitcoin’s transaction volume from the first quarter of 2021 alone beat “all credit card networks combined for the entire year.”

And that’s in just over one decade!

A trend that’s going to turn the $100 trillion global financial industry on its head.

Following the Internet’s Path to Fortune

You’re at your colorful new Apple iMac, listening to the beeps as your modem connects to the internet.

You couldn’t imagine what was coming just a few years later.

Today, instead of an iMac, you’re reading this on an iPad that looks like something out of Star Trek.

No more modem either — just a wireless connection that’s about 125 times faster.

With this new technology came the dawn of a whole new digital economy.

Now, instead of reaching for the Yellow Pages, you tap the Google icon. You stream your favorite movies on Netflix or FaceTime with a friend living halfway across the world.

These online businesses account for a staggering 15% of all global GDP. That share has grown 2.5X faster than the total GDP for the last 15 years.

Up until crypto, the internet was the world’s biggest investment success story.

And today’s cryptocurrency market is roughly on par with the internet we knew in 1998: 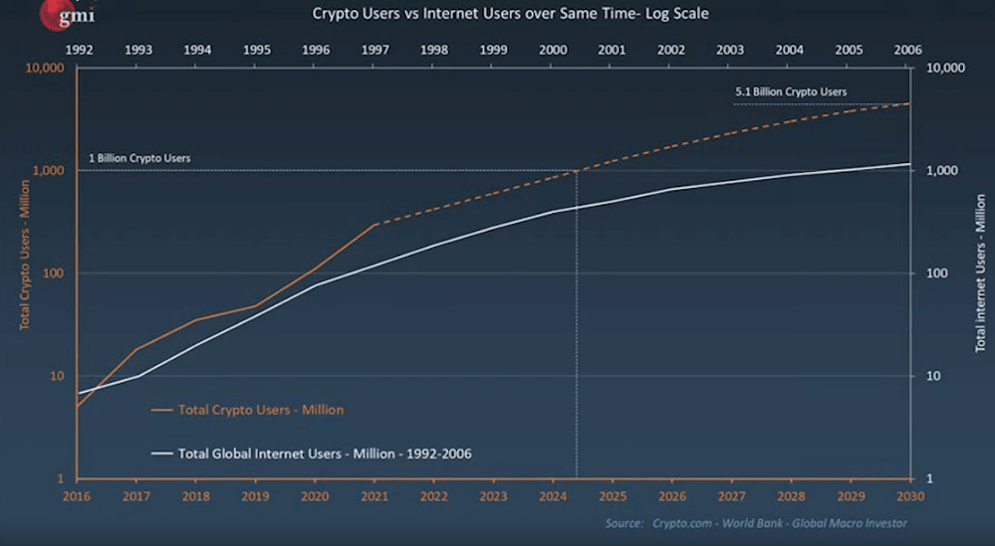 It was a crucial point between the new technology’s breakout first generation — and the more sophisticated, far more lucrative second generation. You can see examples of this from the internet era.

Remember Myspace? It was the first popular social media platform. Rupert Murdoch famously bought it for $580 million, which he admitted was a “huge mistake” (his words, not mine).

Then along came Facebook. It was a next-gen alternative that took the world by storm. It delivered 10,000,000% for early investors.

Or what about the early search engine AltaVista? Never heard of it? You’re not alone.

We’re now standing at the same tipping point with crypto. Except as crypto’s next generation takes off, the potential for gains is far higher…

How Crypto Is Cracking the $100 Trillion Currency Code

Crypto started out as a subversive movement against centralization.

It was a rebellious alternative for people sick and tired of the chokehold governments have on our money.

That meant getting away from the inflation that ends up being the final deathblow to most fiat currencies.

Take the U.S. dollar, for example.

We feel it every time we fill up our cars at the pump or check out at the grocery store.

Most of our assets are held in the dollar too.

Not just stocks, but even your home is a dollar-denominated asset.

Your small business, your medical office or your legal practice — every single one of these things you’ve worked so hard for — they’re all tied to the dollar’s fate.

That means your wealth is also tied to the U.S.’ federal debt of $28 trillion (and growing).

But with cryptocurrency, everyday Americans suddenly have an alternative to this rigged system.

And it’s sending shock waves throughout the financial world.

You can see a glimpse of it in the credit card business.

Credit card companies collect a transaction fee of 2.5% to 3.5% from vendors.

Of course, these fees add up.

Vendors pay because it’s convenient. And there are no good alternatives.

But Ethereum can complete over 58 times the transaction volume of Visa’s network, all at a tiny fraction of the cost.

That’s why credit card companies are in such a hurry to offer crypto. If you can’t beat ‘em, join ‘em! 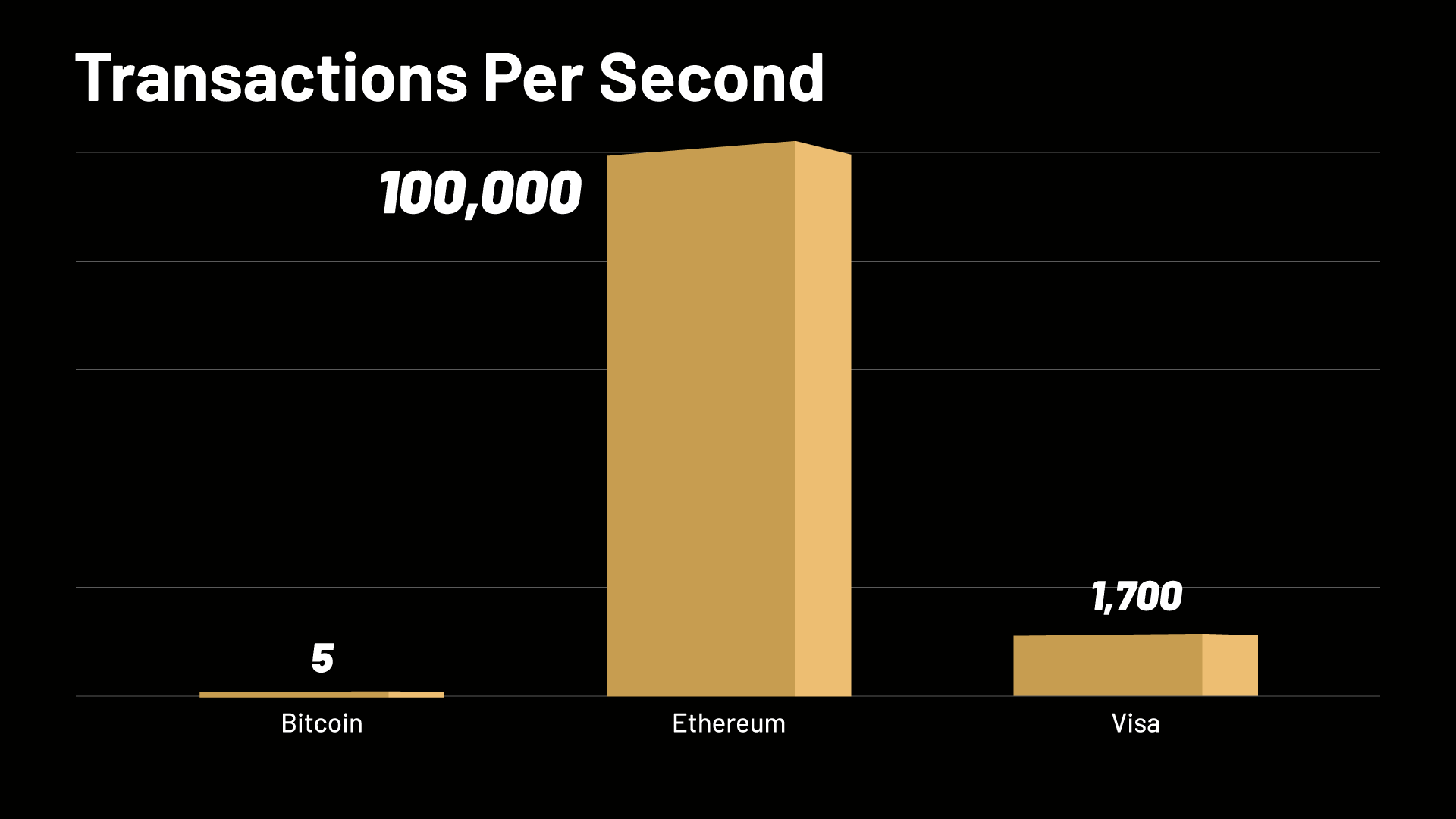 That’s just one snapshot of what’s happening across the $100 trillion global financial system. 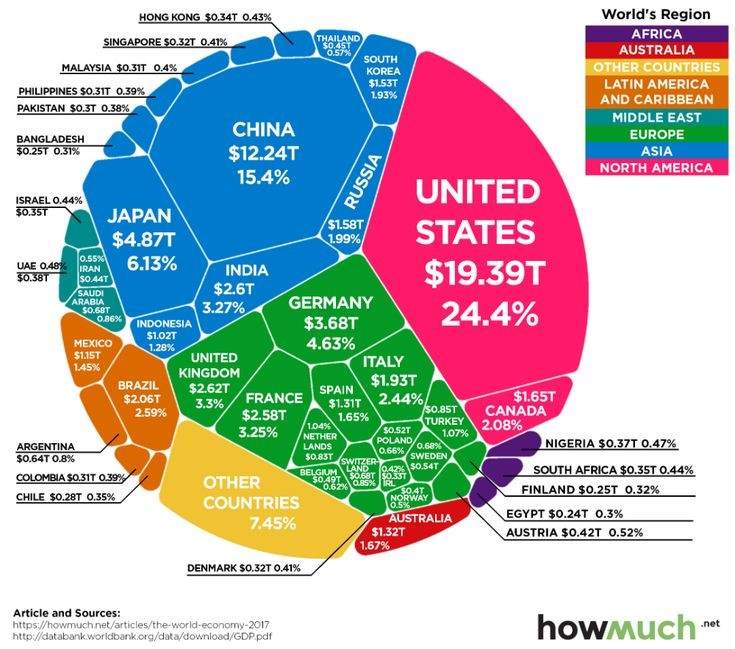 Crypto is shaking up everything from banking to finance, payment systems, lending, bookkeeping and more.

Next-generation cryptocurrencies are proving to be more than just a store of value. They’re computational networks and frameworks for whole new digital assets and services.

Even top tech companies like Apple, Google and Amazon are losing their developers to crypto projects. These people know a tech revolution when they see one.

But remember, crypto investing is still in its earliest stages.

Only 36% of institutions hold any digital assets at all.

If they invested just 1% of their portfolios in crypto, its total market cap would be $6 trillion.

I think it will be whole lot higher than that.

Laying the Foundation of Your Next Million

In less than a decade, we won’t even be using paper money.

I’m already seeing it in my daily life. The last time my family and I went out to eat, the cashier informed us they were a cash-free establishment.

If that shocks you, just remember this: The U.S. dollar’s lifespan is still longer than any other world reserve currency in the last 570 years:

There’s a reckoning ahead for the U.S. dollar. It’s only a matter of time until it loses its reserve currency status. And when that happens, anyone holding dollars or dollar-denominated assets is in for a massive shock.

Not just with big banks and payment processors either, but with people like you and me.

Even while markets sank before leveling off in July, tens of millions were still diving into crypto.

Because now is the perfect time to start buying. And I know from experience.

Crypto’s last major downturn was only four years ago. Bitcoin dropped over 80%, and the mood in the industry was dire.

But when everyone zigs, you must zag.

I stuck with my convictions and watched as bitcoin soared over 1,600% off its lows.

The cryptos that lead the next rally will be different though.

Because they’ll be a part of decentralized finance (DeFi). This new system will turn finance as we know it upside down.

Even an official from the Commodities Futures Trading Commission knows it:

When I think about DeFi, it’s obviously revolutionary and could lead to a massive disintermediation in the financial system.

In the last two years, DeFi has already soared from $10 billion to $78 billion.

And as next- generation cryptocurrencies begin to take over, they’ll be setting their sights much higher — on the $100 trillion global financial system.

So if you missed the bitcoin wave — the one that minted 100,000 millionaires — now is your chance to mint your next million on the next generation of cryptos. 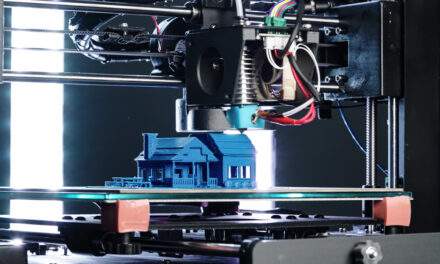 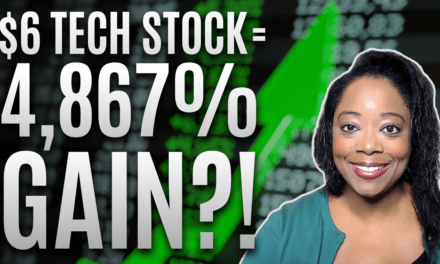