Economists talk about growth in terms of gross domestic product (GDP) or income. These factors are important, but they don’t mean much to average people. For example, GDP totals $19 trillion for the U.S. This is good, but doesn’t tell me anything about the average family.

Ronald Reagan summed up how Americans think about the economy in a 1980 debate with President Jimmy Carter. Reagan ended with a simple question: “Are you better off than you were four years ago?”

That’s how we think about the economy. We ask: Are we better off?

The only difference between now and 1980 is the time frame we think about. Now, we often compare our current situation with how we were nine years ago, before the Great Recession led to so much change.

A Crisis of Confidence

To answer “Are you better off than you were nine years ago?” families think about their income. But they think of how much their income grew in a very particular way.

Families understand inflation. They know they are only better off if their income grows more than inflation. Families also know that inflation in their “must pay” bills hurts the most. They fall behind even when income rises if there isn’t enough money to pay for kids’ activities or an occasional dinner out.

The chart below shows the average annual change in real disposable income over the past nine years. This is the time frame since the Great Recession. For comparison, the chart shows the same measure going back to 1969, the earliest date the data is available. The trend is clear: Real disposable income has been growing at a slower and slower rate over time. 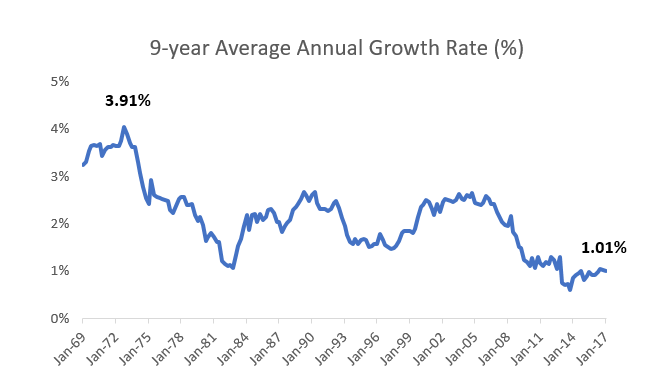 That chart shows why so many of us feel poorer than ever. Real disposable income growth is too slow to be meaningful for too many families.

When real disposable income grew at more than 3% a year in the early 1970s, families could double their standard of living about once every 24 years, or twice during a typical career. At the lower rate of about 2%, standards of living took about 36 years to double.

Now, average families need to work about 70 years to double their standard of living. At this pace, many Americans won’t see a real change in their lifestyle during their entire working career.

That explains the feeling of malaise in the country, a problem Reagan was addressing with his question. He was countering Carter’s 1979 “crisis of confidence” speech, which could describe the America of 2017:

I want to talk to you right now about a fundamental threat to American democracy. … The threat is nearly invisible in ordinary ways. It is a crisis of confidence. It is a crisis that strikes at the very heart and soul and spirit of our national will. We can see this crisis in the growing doubt about the meaning of our own lives and in the loss of a unity of purpose for our nation.

This became known as the “malaise” speech even though Carter never used that word. In 2017, we know malaise is likely to prevail until real disposable income growth tops 2%.

The Dollar Falling Won’t Lead to Inflation, Here’s Why