Home » Investment Opportunities » Wearable Technology Is Entering Its Next Phase

Wearable Technology Is Entering Its Next Phase

Back in 2013, Fitbit Inc. (NYSE: FIT) took the world by storm with its first wrist-worn fitness tracker.

Just two years later, it went public, seeing a valuation of about $10 billion in July 2015 before crashing down to earth. Since then, it has been on track to join Atari, AOL and MySpace in the category of companies that started a revolution but quickly faded into obscurity.

Right now, we’re nearing the end of the first growth phase in wearable technology. But looking at the chart below, you can see that the wearables industry is expected to enter into another period of high growth starting in 2019. 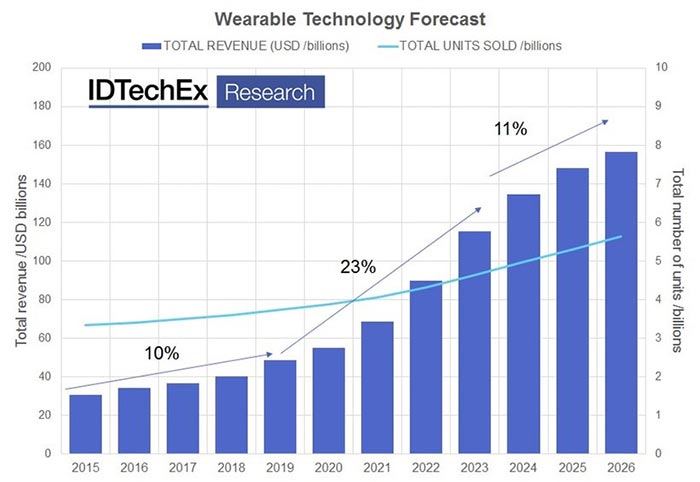 This is what’s being referred to as “the second wave.” As the first growth phase is dominated by things like fitness trackers and smartwatches, the second one is expected to be much different.

There are a few possibilities for what could dominate the wearables market next. One product that’s been making giant strides over the past year or so is smart clothing.

Some startup companies like Wearable X and Lumo Run have created clothing that can help your body take and hold certain yoga poses and can also be used for stretching.

Another possibility that has a more serious need is medical wearables.

Although wearables have had a presence in health care for a couple years now, they’re getting more and more advanced. The next wave will do much more than just track basic things like sleep, heart rate, oxygen level and blood pressure.

It’s expected that in the future, all of this data will be integrated with the Internet of Things. That means you’ll be able to set an alarm on your wearable that directly contacts your physician or emergency contact when your heart rate is too high. Doctors will have access to all patients’ real-time metrics via the cloud.

While many of the companies working on these advancements are private and/or new startups, there’s a way to invest in wearable technology through an exchange-traded fund (ETF): the EQM Wearables Index ETF (WEAR).

This Health Care Giant Has Never Been This Cheap