Home » Economy » Buybacks Are Nothing to Worry About

Buybacks Are Nothing to Worry About

Cutting taxes, for some reason, is a subject of debate.

Everyone should be happy about lower bills. But lower tax bills are emotional for many. Some people want their tax cut but object to anyone else’s tax cut. That’s especially true for corporate taxes.

Corporations are taxpayers and job creators. They are also unloved and often demonized. Tax cuts for corporations provided the latest reason to demonize corporations.

In particular, some object to massive share buybacks, which they view as anti-employee.

Sometimes, a company is obligated to complete a share buyback.

The most important job of a company’s management team is to allocate capital. It does this by reinvesting in the business, making acquisitions, rewarding shareholders or doing nothing. That’s it. There are no other uses for cash in a business.

Tax cuts forced management to make decisions about how to allocate the cash companies get to keep because of lower tax rates. Bloomberg recently reported that “about 60% of the gains are going to shareholders, compared with 15% for employees.” 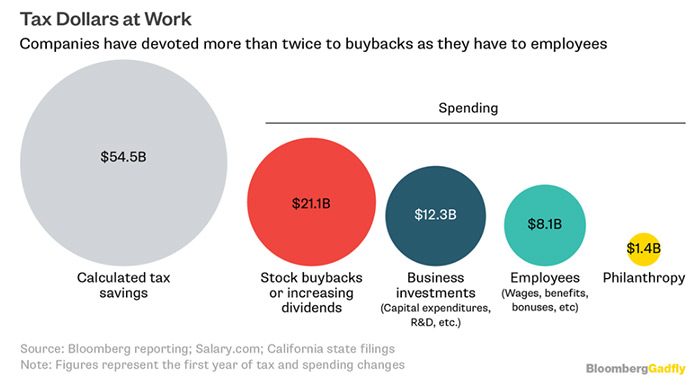 The Bloomberg calculation counts doing nothing as rewarding shareholders.

From an accounting perspective, doing nothing increases retained earnings. That increases the book value of the company and benefits shareholders in the short run. But, eventually, companies will need to do something with that cash.

For now, companies are planning to directly return just 39% of the tax cuts to shareholders. The rest goes to investments in new business opportunities, employee benefits and philanthropy. These dollars eventually deliver rewards to shareholders because each of these expenses should increase earnings.

Buybacks Are the Last Choice for Management

Share buybacks are, in some ways, an admission of management’s failures.

Management has an obligation to use every dollar of cash flow to boost shareholder value. Ideally, managers reinvest in the business to create future wealth. Employee wages and bonuses are a form of investing in the future since employees ultimately generate revenue, profits and shareholder wealth.

When management can’t find profitable business opportunities, they have an obligation to return cash to shareholders. That’s what they’re doing with massive buybacks.

In the long run, buybacks boost earnings. In the short run, they offer an unattractive solution to the problem of slow economic growth. Large buybacks show that management doesn’t have any idea how to spend 100% of the cash from tax cuts.

They can’t simply give all the cash to employees. That would spark inflation.

Buybacks transfer money to the stock market, where much of it sits unused in the accounts of pension funds and large investors. Some investors withdraw some funds to spur additional economic growth.

Buybacks are a short-term problem. As economic growth increases, buybacks will decrease. They’re nothing to worry about.