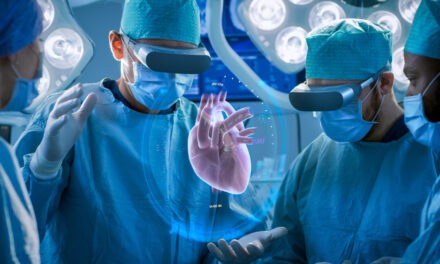 Virtual reality (VR) is a technology that enables the user to become visually and physically immersed in a given environment.

Commonly associated with entertainment and gaming, VR may shine the brightest in the health care industry.

For student surgeons, gaining experience from observations alone is proving to be an inefficient method of training. Instead, cameras can be used to stream the surgery while students watch with a VR headset.

With the headset, students feel like they are physically in the operating room and gain hands-on experience.

In a recent study from Harvard Business Review, surgeons trained with VR saw a 230% boost in their accuracy and speed compared to those who were traditionally trained.

But VR use cases are not limited to training.

In fact, VR is on track to completely transform the $9 trillion health care industry.

VR technology is already being applied regularly in surgery and therapy.

In a recent pilot study, 100% of patients undergoing surgery reported an improved hospital experience while wearing a VR headset.

Children with autism are responding well to the usage of VR in therapy. The technology enables kids to practice skills such as imitation and nonverbal gestures.

VR overcomes constraints faced by traditional therapy, as it can simulate more situations and environments. Examples include crossing a busy intersection or interacting with law enforcement.

Health Care on Your Apple Watch

Growth in telehealth could be the catalyst that speeds up the adoption of VR.

Despite a drop in telehealth services since May, services were still up 4,132% year over year in June. In an effort to enhance telehealth, clinics offering VR therapy have begun launching.

XRHealth will use the real-time data from the watch to adjust the environment during VR therapy.

Don’t Miss Out on This Huge Investment Opportunity

The market for VR in health care is expected to increase by 15 times globally over the next seven years: 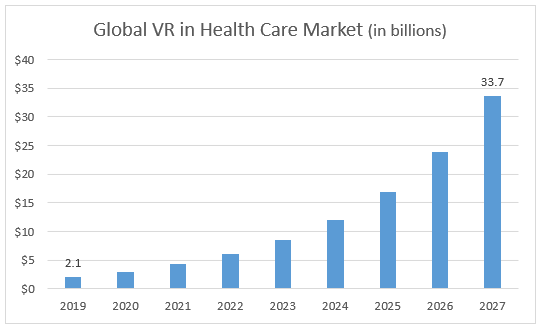 As you can see in the chart above, VR is growing fast but is still in its early stages.

This is an ideal scenario for investors who want to make huge profits.

Don’t Get Run Over by This Electric Automaker

Profit From an Indicator Fix No One Is Talking About