Home » Investing » This Indicator Saved You From the COVID Sell-Off. Now, It’s Bearish

This Indicator Saved You From the COVID Sell-Off. Now, It’s Bearish 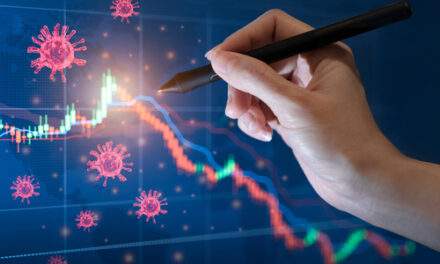 Being an Air Force veteran, especially one who programmed missile trajectories for many years, means I can’t help but observe the fighting in Ukraine like a technician.

Russia is mostly shelling Ukrainian cities with indirect fire. That means they’re throwing the shell into the air without necessarily having eyes on the target. Once fired, gravity basically controls the outcome.

The shooters are relying on basic math to target their weapons. Army personnel are given coordinates and the geographic location of the target. Then they simply calculate what angle to fire at to hit the target.

This is different from the smart weapons the U.S. generally relies on, which can be retargeted almost until impact.

I spent many years in the Air Force learning the math behind these missile launches. But what might surprise you is I still use that math in the stock market, where the trajectory of stocks often follows similar principles.

Today I’ll share my latest creation — a trajectory indicator — and show you what it’s telling me about the S&P 500. (The technically minded should stick around, because I’m giving away the source code to anyone who wants it.) 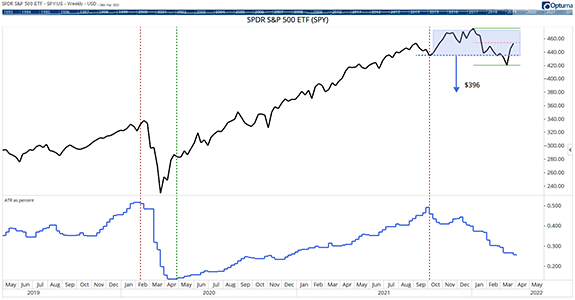 The indicator on the chart is a volatility indicator that I created. (If you’d like the formula for the indicator to use in your own charting software, email me at TrueOptions@BanyanHill.com and I’ll send it to you. Just be sure to put “Volatility Indicator” in the subject line.)

The red vertical lines on the chart show the sell signals. Green dashed lines are the buy signals. These occur when the indicator at the bottom of the chart reverses from an overbought extreme.

This indicator provided a sell signal before traders understood how bad COVID-19 was. Since the indicator began to sell off before the market did, it gave us an idea of the market’s future trajectory.

It also provided a buy signal as the economy was beginning to reopen. You didn’t catch the exact bottom, but you were still back in stocks at a healthy discount.

This indicator flashed a sell signal on SPY back in early October. While that was early, you did sidestep a lot of the volatility of the past few months.

We also don’t yet have a new buy signal on SPY, and the price action is telling us to be cautious.

The blue rectangle is a trading range that enclosed the price action from October to late February. News of Russia’s invasion pushed prices down and out of the range, but there was a quick recovery.

The blue arrow shows my price target based on the trading range. To find the target, I assume that after a breakout, prices will move a distance that’s at least equal to the depth of the range.

Of course, prices never move straight down, or up. We’ve broken out of the range but recovered well in the past week.

But note the thin green lines that mark the top and bottom of the decline. The red dashed line is the 61.8% retracement of that move — one of the Fibonacci retracement levels I mentioned a couple weeks back.

At Friday’s close, SPY had retraced 61.8% of the decline. This is a warning that the rally could stall.

Being a Bear Is the Safe Move Here

This will come after the bottom, but it shows when it’s safe to be a bull. It’s not right now.

My volatility indicator is still rising, and the price action is not in a confirmed bullish chart pattern. While we may have seen a bottom, risks remain high. The best way to trade right now is with one eye toward the exit.

That’s how I trade in One Trade, and we’ve had success in similar markets with this strategy.

In February 2020 for example, as officials assured us the pandemic was nothing to worry about, I recommended a put option that gained more than 49% in three days.

This past February, a similar signal resulted in a put trade that gained 77% in one day.

We don’t only trade puts in One Trade, either. We benefit from calls when prices are going up.

As the chart shows, the downside could be significant.

To protect yourself from that, click here and learn everything you can about my One Trade strategy.

Chart of the Day: Well, Would You Look at That? 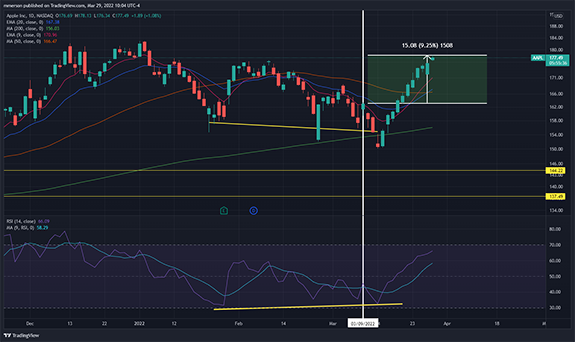 A few weeks back, Mike’s protégé and our very own senior analyst Amber Hestla shared an example call option trade on AAPL that, turns out, would’ve made you a ton of money.

The call expired just over a week ago, so I can’t tell you exactly how high it went. But I can tell you that AAPL has risen almost 10% since Amber sent you that “example” trade. Were it not expired, it would be in the money in today’s trading, and likely pointing to a multibagger return.

There were other signs, like the positive divergence on the RSI indicator. And just the general oversold-ness of the market.

All this is to say, pay close attention to the recommendations we make, even when they aren’t outright recommendations! They could lead you to easy profits… 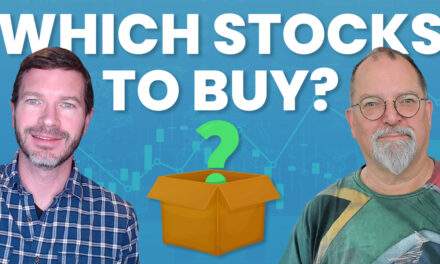 Who Has Earnings Power?