The Triple-Digit Gain I Don’t Want You to Make 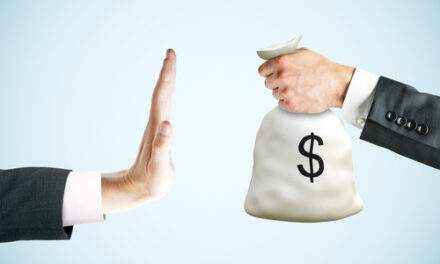 If you used my options trading service One Trade over the past two weeks in 2022, you could’ve made 363%…If you’re a shameful, degenerate gambler.Let me show you how you could have made that gain. Then, I’ll show you why I think it would’ve been the wrong way to trade my strategy.On January 24, I recommended a call option on the SPDR S&P 500 ETF (SPY). The stock market was plummeting at that time, and I believed a short-term rally was due.Option premiums were expensive because of the recent volatility. This trade cost $891 to enter. We closed that two days later for $1,255. That’s a 40.9% gain.On February 2, I recommended a put option on SPY to benefit from some weakness. The option I recommended cost $305 per contract. Using the gain from the previous trade, you could have bought four contracts for $1,220.The next day, I recommended taking a 77.4% gain on that trade. Closing that trade with each contract trading at $541 saw your account grow to $2,199. That’s the profit on the trade plus the $35 uninvested when you opened that trade.On February 8, I spotted another opportunity. This was a call on SPY that cost $408 per contract. Your account would have had enough to trade 5 contracts, leaving $159 in uninvested cash. We sold those the next day for $794 per contract. At that point, your account value would be $4,129.Based on a starting account value of $891, that’s a 363% gain in about two weeks.Sounds great, right? Wrong.I hope that no one did that. Here’s why…

The reason is obvious — if you always roll all your profits into the next trade, you will eventually lose all your money on the inevitable losing trade.These trades were shared with subscribers to my One Trade service. I trade alongside them in that service, following strict legal protocols to ensure everything is fair.To make these trades, I fund a brokerage account. My customer support team has access to that account. When they see an alert, they make the trade using the instructions I provided. I have no contact with the traders about this service. This ensures there are no leaks about trade recommendations before the alert is sent.Sometimes they are in a meeting, and they place the trade late. I believe that happens to my subscribers too, so this arrangement roughly duplicates a typical subscriber experience.All profits in this account are donated to charity. I’m responsible for covering the losses.

Because we can’t communicate about the trades, we have strictly defined processes. They always trade the same number of contracts on each recommendation. We trade three contracts for a $10,000 account.If I didn’t move the money to a charity, we would increase the number of contracts as profits accrued. For example, we might add a contract when the account value grew to $13,000. We’d decrease one contract if the balance fell below $7,000.Following our money management rules, these trades added just 32.5% to our account value. That might sound disappointing, but it’s a necessary approach to trading if you want to stay in the game for any length of time.You probably don’t have someone else placing your trades, so you may not have planned how to manage winning streaks and losing streaks. You should take a moment now to do that. I’ll wait.Now that you have a plan, follow it. Add contracts when your profit targets dictate, not before and not after. Decrease contracts according to your plan. This avoids doubling down or following other strategies that can deepen losses.A money management plan might seem like it hurts returns. After all, by using sound money management we only made 32.5% in two weeks when we could have made more than 360%.But this strategy ensures we remain calm in all market environments and know exactly what to do under any circumstances.Regards,

P.S. If you’d like to trade alongside me, in what’s been an increasingly volatile market, there’s no better way to do it than One Trade.The main kicker is that we only trade one ticker, SPY, over and over to generate returns that have historically beaten the market. And along with it, you’re getting a world-class education in options trading, inspired by my time as a professor at the New York Institute of Finance.But what I like most about this strategy is I’ve found a way to have skin in the game. My performance directly benefits a good cause, and if I go on a cold streak, it comes out of my pocket.If this sounds like the kind of strategy you’ve been looking for, just click here to see what it’s all about.

Chart of the Day:You’re Sick of Hearing It, But I Ain’t Sick of Buying It 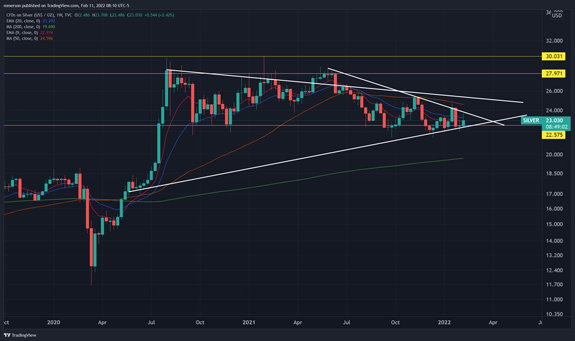 Yup, I’m shouting about silver again.If this isn’t your bag — literally or figuratively — feel free to tune out now…Okay, they’re gone. The bravest among you can now follow me down this rabbit hole.I believe precious metals are at the point where they’re so ignored, so reviled, so utterly mocked that they’re ready to surprise everyone and break much, much higher.Silver has persistently bounced off the ~$22.50 level ever since it fell from the $28 level in mid 2020. It’s also, more recently, been testing that falling resistance line with big pushes and much more frequency.We’re at an inflection point with silver. All it’ll take is a break above $25 to start a new uptrend, in my view. And when those moving averages turn up and start to cross bullish, it’s game on.With inflation running hot, and interest rates likely to weigh on equities, I think there’s a chance the precious metals trade comes back in style later this year.Regards, 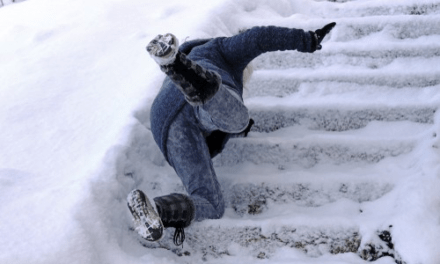 How to Navigate This Market’s Treacherous Conditions 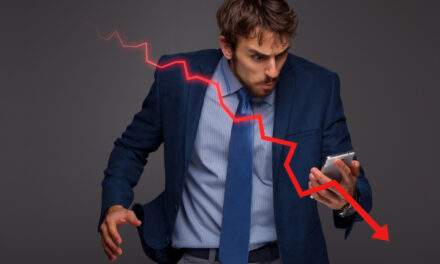 The 1 Thing That Could Cause a Stock Market Collapse