Popularity is not for everyone. This is doubly true when it comes to Wall Street and corporations.

Many of the world’s most innovative companies are led by CEOs and chairmen with larger-than-life personalities. They crave fame and thrive off popularity. It feeds into the ego that drove them toward innovation and risky business ventures to begin with.

Virgin Group’s Richard Branson, Alibaba’s Jack Ma and the late Steve Jobs of Apple are just a few who immediately come to mind.

But with that fame comes a considerable degree of negativity and criticism. You can’t please everyone all the time, and not every investor is going to agree with your direction — even if you were the company’s founder.

Remember, even Steve Jobs was once ousted from Apple because investors and the company’s board disagreed with his vision.

Fame comes hand in hand with heavy scrutiny and criticism when you are running a multibillion-dollar company. When you run a publicly traded company, how you handle that fame and criticism can directly affect stock prices.

For an excellent example of this, we need look no further than beleaguered Tesla Inc. (Nasdaq: TSLA) CEO Elon Musk.

The financial media has swarmed over Musk’s comments and activities in the past several months. And they’ve highlighted every misstep and off-color statement, much to the detriment of TSLA stockholders.

Investors are now asking if fame has gone to Musk’s head. Can he still effectively lead Tesla toward profitability, or is now the time to bail on TSLA stock?

We’re talking about your investment dollars here, so I’ll not mince words. I was wrong to back Musk’s irreverent behavior back in May.

This moment was arguably the start of the recent plunge in market sentiment toward Tesla. Tired of answering questions about Tesla’s profitability and Model 3 deliveries, Musk lashed out at analysts on an earnings conference call. While he had a point in arguing against sell-side analysts, Musk handled the situation poorly.

It was the first of many poor PR decisions:

These missteps have two common themes: They were all avoidable, and they all had little to do with Tesla’s business.

Ignore Musk and Focus on Tesla

While Musk is clearly having trouble dealing with criticism and fame, Tesla is at the leading edge of several key markets. The company is pioneering affordable energy storage and solar power (something many investors forget), and it is the leading name in electric vehicles.

Gigafactory 1 creates a significant barrier for competition, and manufacturing capability should be a competitive advantage for TSLA over the long term. We believe TSLA’s Gigafactory enables the company to drive down costs through an industrialization of battery pack assembly and economies of scale.

We think the setup in sentiment looks relatively favorable for the next few weeks. We now see the near-term risk-reward for Tesla as relatively skewed to the upside, given the potential for the stock to revert toward the middle of its $270 to $370 range.

What’s more, a key moment for Tesla investors is coming up quick. The company will soon release its third-quarter production figures.

While Musk has promised that Tesla will be profitable in the third quarter, investors should just ignore him for now and focus on the reported figures.

The company expected to build 50,000 to 55,000 Model 3 units in the quarter. Deliveries are seen exceeding these figures. Model S and Model X deliveries are forecast to accelerate in the second half of the year, arriving at between 73,000 and 83,000 units.

If Tesla hits these targets, it will be a sign that the company’s business is not suffering from Musk’s inflated promises and questionable public image. This is what investors should be focusing on.

Right now, there’s no reason to think that Tesla will not produce acceptable production figures.

What’s more, when Musk was not in the headlines, TSLA stock was performing quite well. This tells me that the recent decline in TSLA shares is all sentiment driven, and not focused on the company’s actual performance.

Taken from this perspective, the recent plunge in TSLA stock represents a buying opportunity. 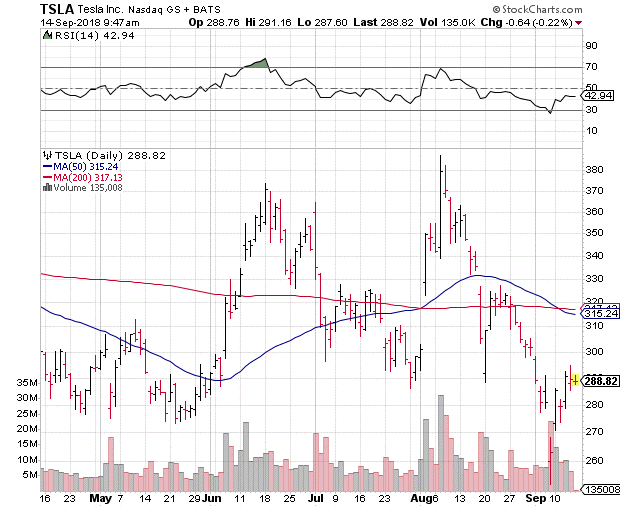 You can see the direct effect from the plunge in sentiment in the chart above. However, TSLA stock is now rebounding from its recent lows, and the 14-day Relative Strength Index is trending higher, indicating rising buying activity.

That said, investing in TSLA is not without risk. Continued bad behavior from Musk will certainly have an impact on the stock. Additionally, light production numbers later this month would undermine the contrarian case for TSLA further.

Still, if you can stomach the risk, TSLA is a buy at these levels for its growth potential alone. Those investors who are more risk averse will want to wait until Tesla reports production figures and the stock reclaims price support at $300 before buying in.

Energy Stock Alert: You Have a Rare Buying Opportunity