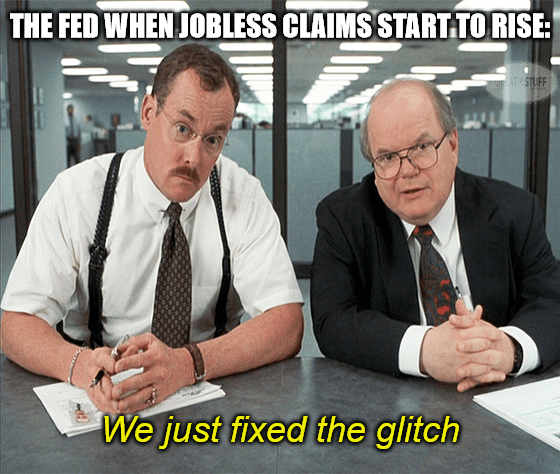 Twerkin’ On The Working Man

Great Ones, what’s the one thing keeping the talking heads on Wall Street from declaring an “official” U.S. recession?

Jobs, right? Employment numbers. The ever-burgeoning U.S. workforce. I mean, the “Working Man” (or woman) is the lifeblood of the U.S. economy, after all.

But what if I told you that “strong workforce” narrative was on the verge of collapsing? And that it was all planned this way?

I was wondering why there’s nothin’ goin’ down here.

Hmm … maybe you should have a seat and take yourself out an ice-cold beer.

Get to the point, Geddy Lee!

You’re in a rush today, I see.

Now, we all know what this means. It means that corporations are beginning to lay off workers, and that new positions aren’t being filled as quickly.

Y’all already knew this information before it hit Wall Street. Y’all live in the real world, after all, and can see people struggling to find jobs and getting laid off from existing jobs already.

Again, this is exactly what the Federal Reserve wants … and the Wall Street talking heads know. Which is why practically everyone with a voice in the financial media is harping on the idea that rising jobless claims is a good thing.

“As the unemployment rate ticks higher, wage growth will likely slow, taming some of the inflationary pressure in the US economy,” said Bill Adams, chief economist for Comerica Bank.

The increase in jobless claims will be welcome by the market. Investors have been hoping for a cooling in the labor market in hopes that it will sway the Federal Reserve to be less aggressive in its hiking of interest rates to try and battle red-hot inflation.

Welcomed by the market, huh? Is that why the major U.S. indexes finished lower today?

The fact of the matter is that the recession (that no one wants to admit we are already in) will deepen significantly before this is all over. The U.S. Federal Reserve has stated time and time again that curbing labor costs is one of its primary goals in its quest to lower inflation.

And in the perverse way that Wall Street looks at the world, this scenario works out fine … sort of.

We all know that the real driver for inflation is on the supply side of the equation. There’s still an enormous amount of pent-up demand in the wake of the pandemic. Yet companies are unable to meet that demand adequately due to staffing issues and continued supply chain problems — *cough cough* China’s Zero-COVID policy. 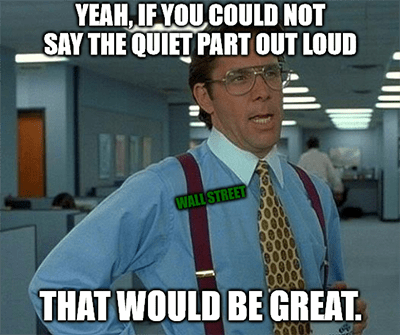 Since the Federal Reserve has basically zero power to influence the supply side of the equation, it’s hitting the demand side with a sledgehammer.

And that means less investment capital to further inflate stocks and other investment assets, which is a very good thing. We need to get that excess money out of the system.

But it also means less investment capital to hire more workers … or maintain existing workers, for that matter.

So when unemployment starts to rise, demand starts to fall. The Fed is banking on this fall in demand to lower inflation. But it still doesn’t fix the supply problems. And, in fact, it will worsen supply problems due to the difficulty in funding expansion and hiring due to higher interest rates.

For investors like you and me, Great Ones, this means a return to more realistic stock and asset prices, which provides us with opportunities to pick up solid stocks at potentially bargain prices.

If the Federal Reserve does its job correctly, we’ll get a brief and shallow U.S. recession that leads into a tailwind for massive growth potential once inflation is tamed.

But I think we all know “correctly” is already out the door. What we’re headed for — and what tomorrow’s September jobs report could lend credence to — is stagflation.

Since the problem isn’t on the demand side, decreasing demand only serves to send mixed signals to the supply side. If the Fed goes too far too fast, we end up with inflation still being a problem — because supply still hasn’t caught up with even lowered demand — and declining jobs growth.

I’m not going to sugarcoat this one for y’all: If you are a regular Joe in this market and not an investor, things are going to suck.

However, if you are an investor … and a Great One … you’ll definitely have opportunities to not only ride out this storm, but profit from it. Smugly … I might add.

If you aren’t already battening down the hatches, building your bunker and prepping your investment portfolio for the worst, the time to act is NOW!

And it all starts with one thing…

I don’t know why…

It doesn’t even matter how hard you try: One investment not only combats inflation, it can be a hedge against rising interest rates and market volatility.

Billionaires are already pocketing hundreds of millions of dollars from it, but most Main Street investors are missing out. Don’t be one of them!

Click here for all the details (PLUS a FREE offer).

This Just In: Gamers Gonna Game 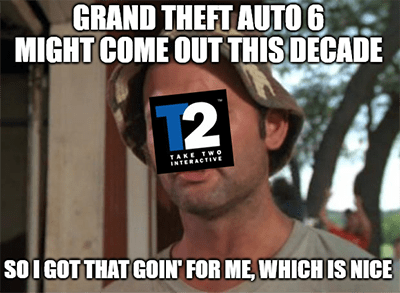 As if anyone expected otherwise, Goldman Sachs just upgraded videogame maker Take-Two Interactive (Nasdaq: TTWO) due to its long-term prospects in the videogame industry. Goldman Sachs also raised its price target on TTWO from $131 to $165.

According to Analyst Eric Sheridan:

The long-term trends should start to emerge in 2023 and 2024, as the company’s content pipeline should “result in improved revenue growth and expanding margins” with games moving from development to launch.

Banking on AAA video games to actually launch? That’s a bold move, Cotton. Let’s see how it plays out for them. (Though, granted, Sheridan’s only counting on games to move from development to launch … and knowing how the major gamemakers are these days, that doesn’t mean said development is “finished.”)

So the analyst crowd is already looking out to 2025 and 2026 for the next Grand Theft Auto release to start impacting Take-Two’s top line … but that’s, like, a lifetime away in internet time. Grand Theft Auto fans and TTWO investors are probably both asking: What have you done for me lately?

Who knew Conagra (NYSE: CAG) was gonna be the recession play to rule them all?

Uhh, everyone. Everyone knew.

OK, sure, it’s no big surprise that a processed-food maker had a bang-up quarter at a time when literally everything in the grocery store is getting more expensive.

Y’all know Conagra … the other other food conglomerate clogging up your pantry with everything from Slim Jims and Hungry Man dinners to Duncan Hines mixes and Orville Redenbacher popcorn. And CAG investors can thank all the snackers nationwide for the company’s double-beat report:

You’re welcome, Conagra investors: My gourmet Chef Boyardee meals have paid right into your hands. Though it sounds like more than a few folks have been hitting up the frozen food aisle for cheaper dinner ideas lately … well, “cheap-ish.”

You’d think that CAG shares would’ve jumped up a bit on the report, but nope: down 2%.

Stuck In The Stagflation Cycle 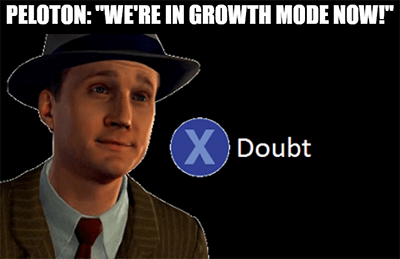 What was that we were just saying about declining jobs growth and uncertainty hitting the labor market? Yeah … about that.

Always the barometer for how not to run a business, Peloton (Nasdaq: PTON) is laying off 500 workers — but it’s all OK, you see, it’s all in the name of growth! Not growth for those employees, mind you … but for the sake of the mothership, Peloton!

After the latest round of employees to face the Peloton firing squad exited stage left, CEO Barry McCarthy noted: “The restructuring is done with today’s announcement. Now we’re focused on growth.”

Why do I get the feeling that … the restructuring isn’t quite done yet?

It’s probably because of all the other times Mr. McCarthy over here has hyped up that “Peloton’s actually gonna grow now, you guys, we’re totally serious this time. Promise.” And then a bunch more people get fired … or quit … and the cycle continues.

Y’all have heard about the boy who cried wolf, but what about the CEO who cried “growth?”

You Got A Fast Track… 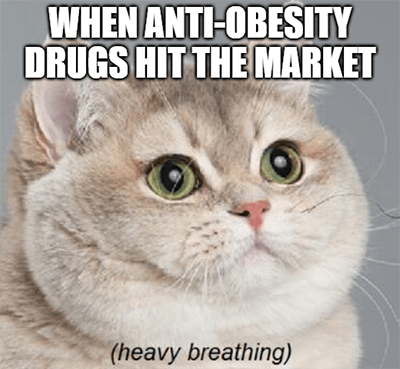 To selling your diabetes drug on the market.

The FDA made a deal. Maybe together we can lose some weight. Any weight is better…

Again, I don’t control the jukebox. But me, myself? I got nothing to lose…

Just two weeks after we covered Eli Lilly’s (NYSE: LLY) new drug for diabeetus — and the analyst attention that such a marketable drug attracted — we’re back at again: Eli Lilly’s Mounjaro just got the Fast Track designation from the FDA.

You got a fast track. Jeez, now you got me doing it!

Well, this Mounjaro drug was approved to treat Type 2 Diabetes back in May, which is no small potato in itself.

But now Eli Lilly is so confident in the drug’s efficacy — with the clinical data to back it up — that now the company wants to broaden Mounjaro’s target market, treating anyone with obesity. And the FDA just quickened that testing-to-market process up a tad. Poof. Magic.

LLY shares were up a whole 1% on the news today. (Woot!) Though I’d expect more rallying is in Eli Lilly’s future once Mounjaro actually reaches the market to treat weight issues.

Silly, Great Stuff. I’m on the “we’re broke” diet instead.

If you have a stock or investing idea you’d like to see Great Stuff cover, let us know at: GreatStuffToday@BanyanHill.com. 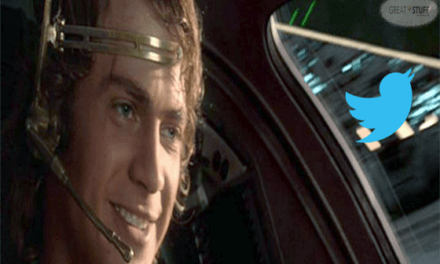 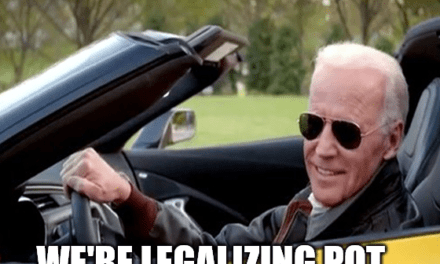