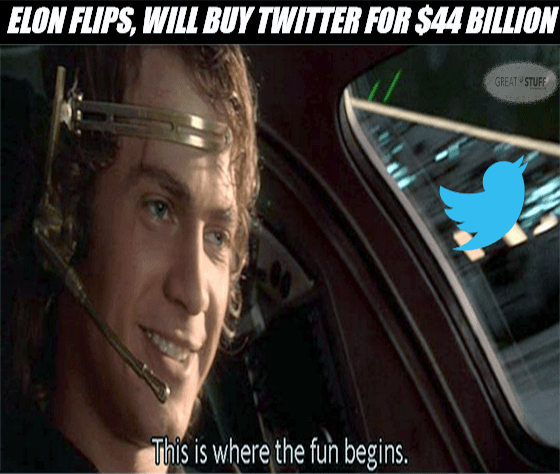 To be bought by Elon Musk?

Yes, the Musky One finally gave in. Threw in the towel. Waved the white flag. Bought the…

At about noon yesterday, Elon Musk announced he was going through with his acquisition of Twitter (NYSE: TWTR). The surprise announcement took Wall Street by storm. Trading on TWTR stock was halted briefly before the shares surged more than 20%.

For current TWTR stockholders, it’s a pretty sweet deal. Musk is shelling out $54.20 per share for Twitter — the price he originally agreed upon and signed binding legal documents for.

The question many of you are probably asking yourselves right now is: “Why?”

I mean, why would Elon Musk agree to buy Twitter now when he’s actively arguing in court against the acquisition?

Ya’ll’re smart, Great Ones. Y’all can probably figure this one out all on your own…

Exactly. So far, Delaware Chancery Judge Kathaleen St. J. McCormick has ruled in Twitter’s favor roughly six times in the past three months, while only throwing Musk’s legal team a bone maybe twice — and both of those times were minor victories, indeed.

Furthermore, Musk’s legal team has been rather ham-fisted about the whole legal thing. Judge McCormick slammed Musk for “glaring deficiencies” in how his legal team responded to Twitter’s demands for text messages during discovery … and for general “sloppiness in adhering to guidelines.”

Oof. But then, we all knew that the acquisition agreement was pretty much ironclad. There was no way Elon Musk was going to weasel his way out of either buying Twitter outright or paying the multibillion-dollar breakup fee.

My guess is that Musk’s legal team told him he was screwed, so instead of wasting a few billion on a breakup fee, Musk decided to waste a lot more by just purchasing Twitter.

This is where the fun begins, Great Ones.

If y’all just happen to be holding TWTR stock, good on ya. You just got a 20% bump in the last 24 hours. Take that bump and squirrel that money away into another investment … quick! Get out of Twitter now before this mess gets any weirder.

And if somehow, as a TWTR stockholder, you’re offered a stake in an Elon-owned Twitter … pass on that offer like the plague.

Musk is set to roll back posting restrictions, reverse account bans and purge all the bots. Now, those all sound like good things, depending on where you get your news. But Twitter’s posting restrictions were designed to both keep the company out of legal trouble and to appease advertisers.

Remember, advertising revenue is Twitter’s lifeblood. It can’t survive without it. So pissing off your advertisers in the name of “free speech” sounds all noble and morally right.

But you can be noble and morally right … and still be completely broke. Unfortunately, morality and nobility don’t pay the bills these days. 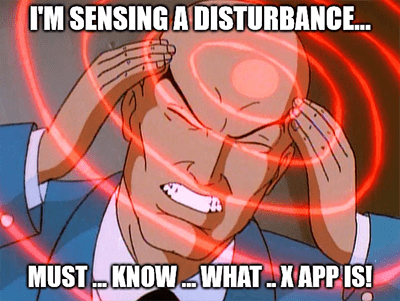 Furthermore, right or wrong, Twitter’s bot account estimates may or may not be completely truthful. But the numbers are truthful enough for advertisers.

When your livelihood as a company depends on reaching the most people as possible with ads, telling advertisers that bots make up half your total subscriber base is probably a very bad move.

Don’t get me wrong: I’m all for honesty and free speech. But Twitter is a company … not the government.

No publicly traded company completely allows free speech, for legal reasons. None. Period. Furthermore, if Twitter’s bot situation is truly that bad, it needs to be dealt with.

But there’s probably a better, more gradual way to deal with both issues than just ripping the Band-Aid off and completely killing your advertising revenue.

Finally, Elon Musk has said that the acquisition of Twitter would be critical in his development of “X, the super app.” In true Musk style, there are no actual details on this “super app.”

We had a name for this kinda thing back in the day … “vaporware.” I’m gonna need a whole lot more info before I even consider taking this “super app” seriously.

The bottom line here, Great Ones: Sell Twitter. Like Billy Joe and Bobby Sue … take the money and run.

Doesn’t sound very “tweet” to me, Great Ones. But you can’t say I didn’t warn you.

How about some more words?

Charles Sizemore will show you how you can conquer this market volatility with five of his favorite high-yielding dividend stocks… He’ll send you the entire list for FREE! And I mean it — no strings attached.

Plus, Charles will also send you his brand-new book, Income Forever. It’s packed full of the tips, tricks and secrets gathered over 20 years of helping independent investors gain financial independence.

Good: Taters On The Lam 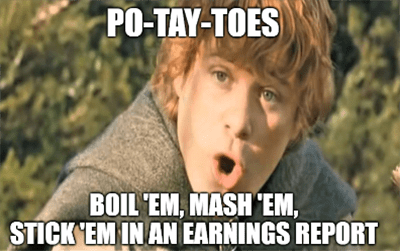 Mmmm… I could go for some lamb and mashed taters right now. Why must you tempt me, Great Stuff?

Oh, because the market tempts me. A few good taters… Lovely big golden chips with a nice piece of fried fish…

Great Ones, did y’all know there’s a publicly traded company that is literally all about Samwise Gamgee’s beloved po-tay-toes?

Did y’all also know that said company quadrupled its earnings over the past quarter, like a mutant tater gone rampant?

Potato supplier Lamb Weston (NYSE: LW) just reported earnings that shot up 317% this quarter, reaching $0.75 per share and handily topping expectations for $0.50 per share. Sales were only up 14% on the quarter as overall potato volume fell, though that still met the Street’s estimates.

Overall potato volume? How loud is a potato? I didn’t even think they made noise.

Many people don’t know this, but potatoes only have eyes … no ears. So they have no idea how loud they’re being. Poor potatoes…

Anywho, potato demand is down slightly, as casual and fast-food restaurant traffic ebbs. And considering those folks are the biggest french fry fryers … that doesn’t bode well for Lamb Weston.

Still, potato price increases offset the drop in volume, keeping the tasty tater trader’s earnings growing at a healthy pace … which, considering we’re talking about starchy fried goodness, it’s quite surprising that any part of this report was “healthy.” 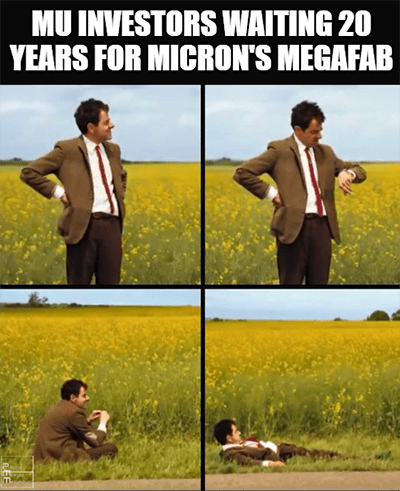 A crazy chipmaker named Micron (Nasdaq: MU), with news about a brand-new phenomenon.

Micron’s already building a new plant in Boise, Idaho (and no, it’s not a potato plant). But leave it to Micron to pull a DJ Khaled and start building another one — this time over in Syracuse, New York.

This ain’t your daddy’s memory-making fabrication plant — Micron’s calling it a “megafab.” It’s like your normal chipmaking fab but … mega?

Of course, building a megafab means building a mega budget too: Micron says it’s going to put $100 billion into the project, which will take about 20 years to build. When the megafab is fully armed and operational, it’ll boost Micron’s U.S. footprint, such that 40% of the company’s DRAM production will be stateside.

In other words … don’t get your hopes up on actually seeing the impact from this plant anytime soon. Heck, MU barely even budged on the news, sinking 1% amid the day’s volatility. 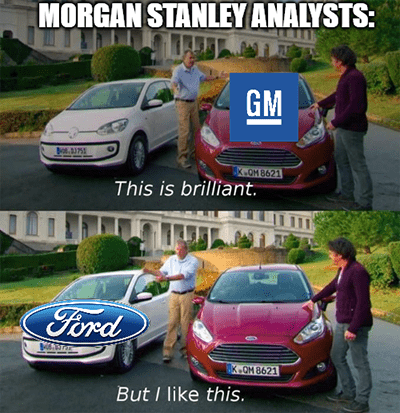 Ford (NYSE: F) made it to the “best” slot? That’s stranger than two straight days of positive stock news! Why, I never…

Our preference for Ford vis-à-vis GM is driven by our views of the business portfolio and strategy. Both stocks offer approximately a 10% FCF yield on our FY23 forecasts.

This ‘splitting of the ratings’ is also not meant to convey a message of recession-bottom buy signal as we have reserved that in our bear case scenarios for both companies which suggest >40% downside for both companies. We’re not there yet.

So … Ford and GM could both drop more than 40% in the case of a U.S. recession. But even if that were to happen, Ford would come out on top because … umm … *vaguely gestures to the business portfolio and strategy.*

The key detail within Ford’s announcement, however, was the sharp growth in EV sales: Thanks to the electric F-150 Lightning and E-Transit van, Ford’s EV sales were up 197% in September … and I have a good feeling this electrical push is the “strategy” that Morgan Stanley loosely alluded to.

What do you think, Great Ones? Have you tried any Ford EVs? Are you invested in Lamb Weston’s po-tay-toe greatness? Any of y’all invested in Twitter? Let me know in the inbox!

If you have a stock or investing idea you’d like to see Great Stuff cover, let us know at: GreatStuffToday@BanyanHill.com. 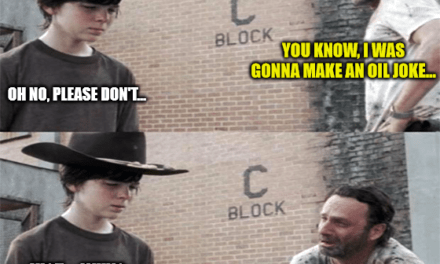 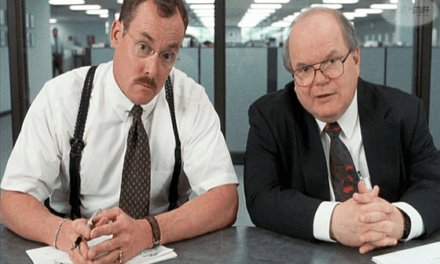