I recently argued that something is different in this economy. Now, Department of Labor data confirms this position.

The job market is defying the laws of supply and demand. These laws are the basis of all economic theory. They are always true … in theory.

For example, when there is more demand than supply, prices rise. In the job market, if there are more jobs than potential workers, we expect wages to rise. But something’s different right now…

The chart below shows we have more job openings than companies can fill, yet wages remain low. 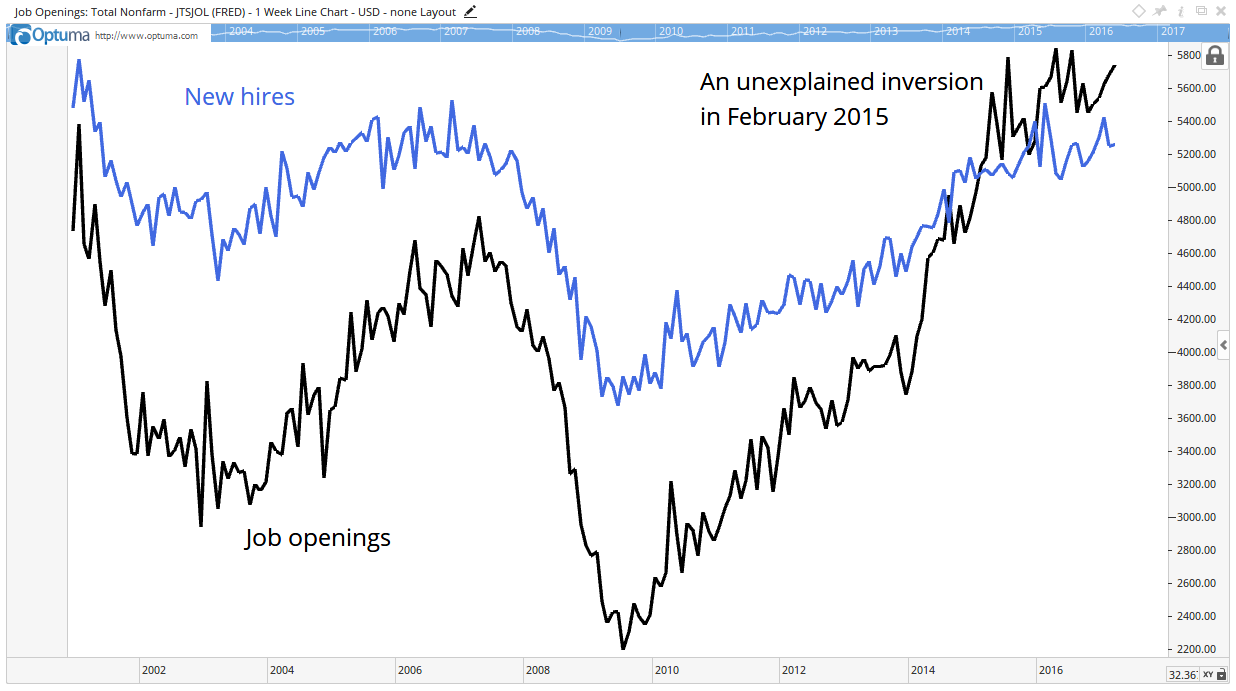 Years ago, there were more applicants for jobs than there were jobs. Companies often hired without even advertising jobs. Word of mouth that a company was hiring could attract candidates. Current employees also referred friends and family to positions before they were advertised. In February 2015, that changed. This is where the lines cross in the chart.

Now there are more job openings than new hires. This indicates employers have problems finding qualified applicants, which is important for a couple of reasons.

Second, employers should boost wages to attract qualified employees. That’s not happening. This is a breakdown in economy theory.

Because openings are advertised, we know employers realize they need people. If qualified applicants existed for the openings, employers would raise wages to persuade them to take jobs. Instead, employers are allowing jobs to go unfilled. Employers understand they can’t find people at any price, so they are rationally avoiding increasing their own costs.

This is a problem, and the Federal Reserve seems to be struggling with it. Fed decision-makers are smart, and they know interest rate increases won’t increase wages. But, as the old saying goes, when all you have is a hammer, everything looks like a nail. All the Fed can do is raise rates because that’s the tool it has available. It’s waiting for its staff to write papers explaining how the economy has changed. Until it knows what’s changed, the Fed is powerless to fix anything.

Yellen Is Not Done Yet