Make Money From the Spending War

“Anything you can do I can do better. I can do anything better than you.”

While these lyrics from Annie Get Your Gun are a great way to write a hook for a musical, they aren’t necessarily the best way to run a government … take Washington, D.C., for example.

On Monday, President Donald Trump kicked off a weeklong campaign to push for $1 trillion in infrastructure spending. The push began with a plan to privatize the nation’s air traffic control system, and was followed up on Wednesday with a speech on addressing crumbling levees, dams and locks along inland waterways.

On Thursday, mayors will meet with Trump to discuss infrastructure usage of tax dollars, and on Friday he’ll round out the week with a trip to the Transportation Department to discuss regulatory changes for roads and railways.

That’s quite an agenda.

Unfortunately for Trump, Democrats in the House are looking to “do better” than the president’s plan. Their infrastructure spending plan comes in at a whopping $2 trillion, and it’s honestly just as thin on details as the president’s.

But we’re not here to argue politics. As investors, we’re here to make money. And with the president and House Democrats on the verge of kicking off a spending war on infrastructure, there’s plenty of money to be made … once this contest of one-upmanship finally settles.

When it comes to improving public buildings, roads, bridges, dams, etc. across the country, you need the right equipment, and lots of it. And there are few companies better poised to deliver on the scale required than Caterpillar Inc. (NYSE: CAT).

What’s more, the company is on the cutting edge of modern technology, implementing many components of the Internet of Things to improve geolocation, machinery tracking and automation to get the job done right, and quickly.

It’s no wonder the company is expected to see sales growth of more than 5% over the next two years. And if Trump or the Democrats get their way on spending, those growth projections could be conservative.

But even if Washington remains at a stalemate on infrastructure spending, Caterpillar is already firing on all cylinders, benefiting from strong manufacturing data and improving leading economic indicators.

The real growth potential for Caterpillar, however, lies outside the U.S. Infrastructure spending in Asia is currently outstripping all Western nations combined. As my colleague Jeff L. Yastine recently reported, China is planning to spend the equivalent of $2.17 trillion on its railways, roads, airports and seaports — eat that, Democrats.

What’s more, China is thinking even bigger. The country is looking to become the center of international trade and economic financial networks; in essence, a new “Silk Road.”

These ambitions will require considerable spending, and Caterpillar is already front and center in the country. In fact, during its first-quarter earnings report, the company said: “Sales in Asia/Pacific were higher as a result of an increase in end-user demand, primarily in China, stemming from increased government support for infrastructure and strong residential investment.”

The main caveat for investing in Caterpillar stock right now is that the shares are trading just shy of overbought levels. CAT stock surged following April’s better-than-expected quarterly earnings report, and the shares have yet to fully work off that enthusiasm. As such, CAT has become a bit choppy of late, with resistance emerging in the $106 region, and support resting well below the shares in the $99-$100 area. 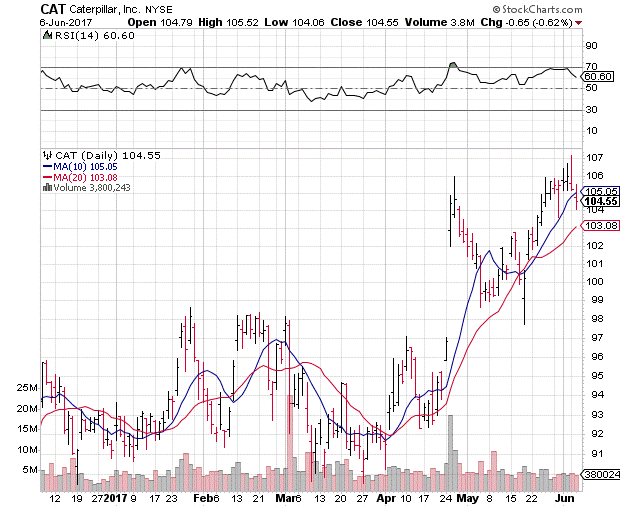 But CAT does have support rising to meet it in the form of its 10- and 20-day moving averages, which should help stabilize the stock in the coming weeks as the post-earnings situation dies down.

For those looking to add CAT to their portfolio, the tried-and-true method of selling puts to name your price — like those strategies offered up in Chad Shoop’s Pure Income service — could work quite well at the moment. CAT is bound to see another consolidation period amid the current focus on infrastructure in D.C., and any pullback to the $100 region or below could be an excellent buying opportunity.

Remember: Regardless of your opinion of the current political climate, there are ways you can profit from it.