Precision Medicine Is the Next Wave of Health Care

Precision medicine has become a hot topic over the past couple of years. By some, it’s even been referred to as the next wave of health care.

A key part of clinical genomics is catching potential diseases in people before they become severe. And over the next five years, it’s projected to become a billion dollar industry.

For now, we’re mostly still in the research phase. But the progress being made is incredible. 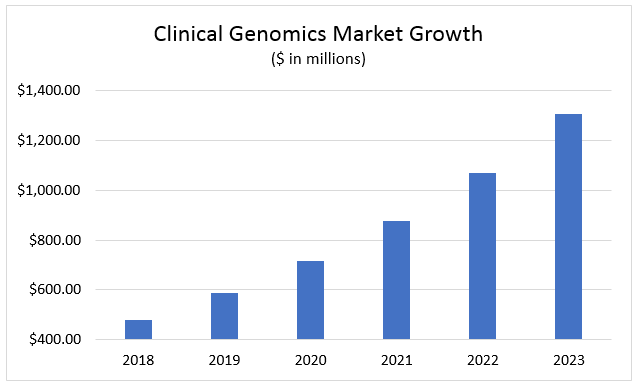 With precision medicine, this is done in the form of diagnostics. This could potentially be done when you get blood drawn for a routine test.

The goal is to be able to detect the possibility that you are more prone to a certain disease just by looking at your DNA. Of course, it could also be used to find early-stage diseases that have gone unnoticed.

One example of how this can be beneficial is with cancer. Cancer is known to take on seemingly infinite forms. That means it’s also in severe need of more efficient methods of treatment and detection.

An example of the progress being made is with detection of prostate cancer. A new blood test that’s been used on people with prostate cancer can tell scientists which form of treatment will be the most likely to cure them. Then, after starting the therapy, it’s used to gauge its effectiveness.

And while undergoing treatment, the same blood test is used to see if they’re becoming resistant to the drug itself.

Clearly, there’s huge demand for this technology. Over the next five years, I believe it has the potential to exceed the expectations shown in the chart above.

With the global health care market set to hit $2 trillion this year, this is just a tiny fraction. But genomics/precision medicine has an impact in so many areas, from detection throughout all treatment stages. That means that it could revolutionize the entire industry, and eventually become the go-to way to help patients.

A good way to invest in this booming technology is through the Invesco DWA Healthcare Momentum ETF (Nasdaq: PTH). This exchange-traded fund has 52 different stocks in companies that all play a part in the precision medicine field.

Marijuana’s Latest Milestone With The FDA Means Legalization Is Near