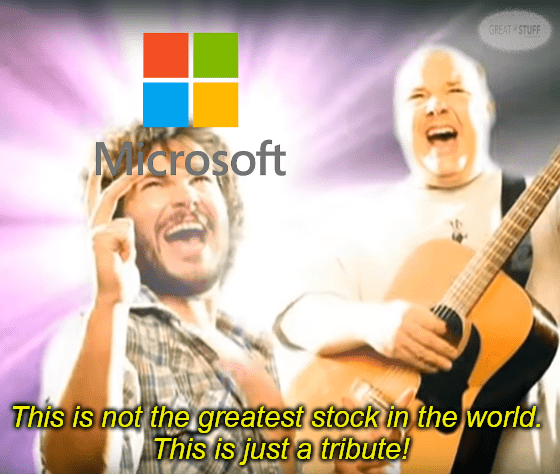 This is the greatest and best stock in the world … Microsoft (Nasdaq: MSFT) tribute.

A long time ago, me and my fellow Great Ones here were hitchhiking down a long and lonesome road, when all of a sudden, there shined a shiny investor in the middle of Wall Street. And he said:

Give me the best stock in the world, or I’ll eat your souls…

Well, me and the Great Ones … we looked at each other and we each said: “OK.”

And we recommended the first stock that came to our heads.

Great Ones, Microsoft clearly isn’t the best stock in the world. No! This is just a tribute.

If you believe the analyst community, the “best stock in the world” is Apple (Nasdaq: AAPL). It’s going to save Wall Street, after all.

(Which is ironic, since without that bailout from Microsoft back in August 1997, Apple would be dead.)

But right here, right now, there are few other places I’d rather be than invested in Microsoft.

“Why?” you ask? Did you see this morning’s quarterly report?!

Do you always answer a hypothetical question with another question?

Don’t you? Isn’t that the only way to have a hypothetical conversation?

Let’s take a gander at the numbers:

And those are just the top- and bottom-line numbers. Microsoft’s Intelligent Cloud unit — which includes Azure and Windows Server — saw a 26% jump in revenue to $19.05 billion. Revenue at Azure itself surged 46%!

By practically every single measure, Microsoft topped Wall Street’s expectations. You don’t see this very often, Great Ones. Maybe once every 100,000 years or so when the sun doth shine and the moon doth glow and the grass doth grow.

Needless to say, Wall Street was stunned. Whip-crack went its whippy tail, and the Microsoft bears were done.

They asked us: “Be you angel investors?”

Microsoft is not the greatest stock in the world. No! It is just a tribute!

Couldn’t remember the greatest stock in the world?

You gotta believe me. And I wish you were there. It’s just a matter of opinion… 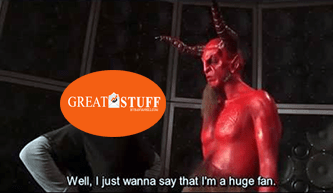 Ol’ Softy has the growth of a young tech startup with the experience and market domination of a major blue-chip technology company. Microsoft has it all.

So are we adding MSFT stock to the Great Stuff Picks Portfolio?

Yeah … about that. No. Not today. For one, we don’t go chasing waterfalls ‘round these parts. We wait until the hype dies down, then we pounce. For two … I don’t know man, the market kinda funny.

I know. Everybody funny. Now you funny, too, Mr. Great Stuff.

Hey, I’m just trying to keep y’all safe. There’s a broad range of risk tolerances out there. A wide berth of available investment capital for y’all Great Ones. So here’s my advice on MSFT stock:

If you can tolerate the risk and have time to weather a continued stock market downturn (should this trend continue), then by all means buy MSFT stock. It’s that good.

But if you’re operating on limited investment capital, in retirement or have a low tolerance for risk … hold off for now. There may be better prices down the road … especially after today’s post-earnings hype dies down.

Instead, check this out:

Musk, Dalio and Cuban are all loading up on this one crypto coin.

It’s called the Next Gen Coin, and the financial elite say it could be 20X bigger than bitcoin.

That’s because, as this presentation explains, this coin has the ability to “power the rails of global finance” … a $100 trillion industry. Yet 99% of Americans don’t even know this coin exists.

As you’ll see in this special interview, crypto expert Ian King reveals the full details on this coin … and why you should invest before the upgrade date.

A Step In The “Right To Repair” Direction 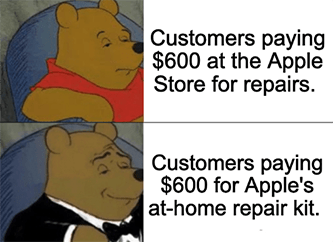 One of the things that’s always irked me about Apple (Nasdaq: AAPL) — aside from its astronomical prices — is the near-total inability to repair and upgrade any modern-day Apple tech.

In fact, it’s the main reason I moved away from Apple products way back when. I like to repair and fix my own stuff … you know, since I own it.

Got a cracked iPhone screen? Gotta pay a professional to pry it off and put your phone back together. Wanna go ham and ramp up your RAM? Ha … not even Apple can help you there. Should’ve paid the extra $1,000 to upgrade before they soldered that bad boy in place!

You get my point. This repair service reliance has been a sticking point in many Apple customers’ craws. But the iEverything company has a solution: its new Self Service Repair store.

Now instead of taking their broken iThings into an Apple Store, DIYers can order repair kits from Apple directly. The caveat? The price of these replacement parts and tools are identical to Apple’s professional services … go figure. 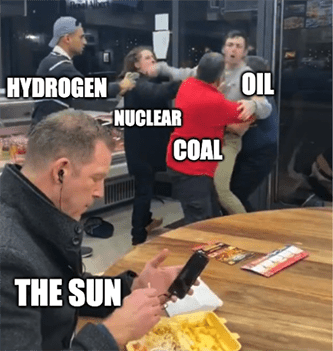 Solar company Enphase Energy (Nasdaq: ENPH) released a blistering earnings report that brought the company one step closer to the sun. (To the moon? Please … that’s so yesterday.)

Enphase topped earnings and revenue expectations this quarter, but the bigger story was its push further into Europe — specifically Italy, Spain and Portugal.

With our cross-Atlantic cousins reeling over Russia’s unprovoked war — and power prices soaring because of it — Enphase’s alternative energy production can help ease some of the short-term burden. ENPH stock shone bright as the sun today, with shares climbing 7%.

It’s more likely than you’d think, thanks to a tiny Silicon Valley company that’s using AI to unleash the largest untapped energy source in the world.

Adam O’Dell just recorded a video exposing all the details behind this alternative energy breakthrough — and how you can start investing in it right away!

Credit Where Credit Is Due

Remember when we told you yesterday not to underestimate the average American’s desire to overspend?

Yeah … about that. Visa’s (NYSE: V) earnings only serve to prove that consumer spending is alive and well in the U.S. of A.

The credit lender seemed virtually unaffected by rising inflation, with payment volume and processed transactions rising 17% and 19% respectively. But travel spending was an even bigger showstopper this quarter, with cross-border transactions climbing 38%.

I mean, so what if you can’t technically afford that trip to Bali? You didn’t spend your whole life tricking cardholders into raising your credit limit just to stop now, did you? It’s you, me and fiscal irresponsibility all the way … at least until Visa cuts us off.

**No credit limits were maxed out in the making of today’s Great Stuff. Promise. 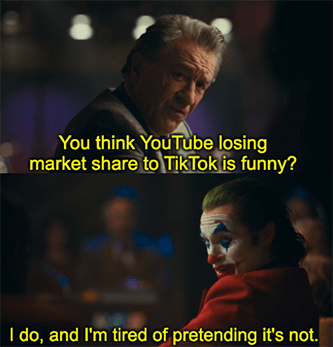 And sometimes, YouTube can’t always get what you need, either — as Alphabet (Nasdaq: GOOGL) is finding out in its first quarter.

The Big Tech titan slipped into the earnings confessional last night and released a letdown of a report, sending shares over 3% lower in the a.m. Growing costs bit into Alphabet’s core advertising business, resulting in lower revenue and earnings than the Street expected.

I guess a rolling social media stone gathers no money … or something like that.

Oh no? Say it ain’t so? I never know if I’m supposed to be happy about crypto or not.

Oh, it’s so, Great Ones! If you ever wanted to round out your bedrock retirement fund with some bitcoin, the future is here. Well, almost here.

Later this year, Fidelity will let you add bitcoin holdings to your 401(k) … presuming you work for a company that uses Fidelity for your retirement funds. Before you get too excited, only 20% of your 401(k) can be tied up in bitcoin.

But why would anyone wanna do that?

Have … have you met a bitcoin hodler before? This is the kind of mainstream acceptance that crypto traders and fanatics have been waiting for since, well, crypto first started up.

Outside of bitcoin’s uber fans, hey, maybe some folks just like to diversify beyond the norm … with some digital flair, of course.

If you thought having bitcoin in your Robinhood account was edgy, imagine the extra clout you’re gonna get when your retirement fund soars because of bitcoin.

Besides, bitcoin futures are already a thing. Adding those virtual coins to your nest egg is the next logical step … right? How many times have I told you not to underestimate the market’s ability to find products for people who have money?

Now, seeing as this is poll day and we’re still rambling on our crypto song, I think you can figure out what’s coming next.

I want to know if you personally would put bitcoin into your 401(k). Be sure to click below and vote!

Poll not working? Got more to say? Write to us! We’ll get to your answers right here next week. If you’re looking for last week’s poll results, you’re in the right place.

With Netflix (Nasdaq: NFLX) ready to blame everyone but itself for the company’s subscriber drop-off, we wanted to know just how widespread Netflix’s password-sharing boogeyman actually is.

Turns out Netflix passwords are more shareable than Reese’s Cups. (I mean, duh, have you had a Reese’s Cup?)

About 46% of you said you share your Netflix account with someone else, while another 33% of you have your own grown-up account. Meanwhile, 21% of your fellow Great Ones were surprised people still watch Netflix in the first place.

Now that just makes me wonder: What are y’all actually streaming … and where? Or are you one of those HD-antennas-in-the-attic kinda “streamer?”

If you’d like to sound off on the week’s hot topics, write to us for Friday Feedback! GreatStuffToday@BanyanHill.com is where you can reach us best. You can also keep up with the action here: 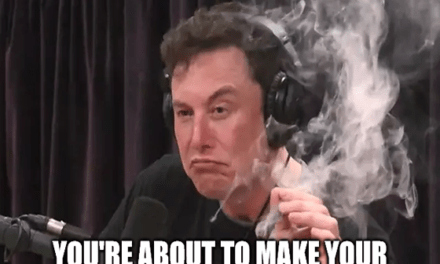 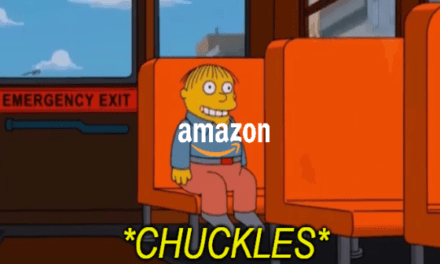