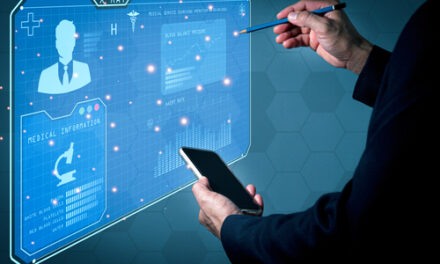 If you haven’t been paying attention, this should be your wake-up call.

This is a huge push for Microsoft to get into the connected health care space.

Microsoft’s CEO Satya Nadella said it best in his tweet: 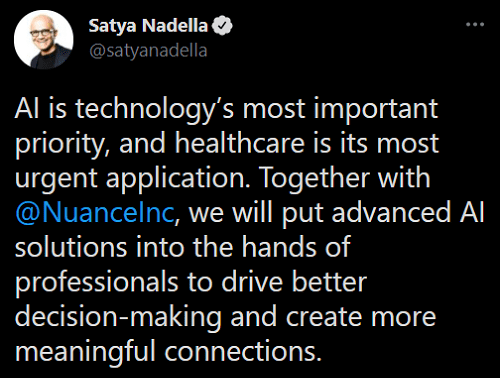 Now, I love when a giant company makes a splash in the markets with a bold acquisition like this.

It tells you which sectors the big money is going into. No surprises. No secrets.

This acquisition is a sign of things to come.

What Nuance Brings to the Table

Right now, Microsoft’s acquisition is telling us that money is flowing into the tech sector … specifically, tech companies focused on health care solutions.

Normally, Microsoft runs a suite of platforms that everyday corporations have grown to depend on. Just as we need water and oxygen to live, the corporate world needs Microsoft products to function.

And now, it wants to have that same essential presence in the rapidly growing health care industry — through Nuance.

Nuance has some of the best AI tech out there. It offers virtual assistants for health records, multi-party conversation transcriptions and a language model that converts clinical conversations into notes to be integrated into health records.

This is the kind of tech that’s taking hospitals and doctors’ offices into the 21st century on their own.

So, you can see why Microsoft didn’t just want a piece of Nuance. Having the entire company under its wing propels it to the front of the health care tech race.

From medical devices to patients and doctors all being in sync through technology … it’ll be a seamless integration that only Microsoft can bring to the table.

The market for these products will be huge. It’s an industry my colleague Charles Mizrahi calls the Internet of Medical Things, or IoMT. And it’s one that you don’t want to miss…

IoMT Will Be a Massive Trend

You see, Microsoft isn’t the only big company getting in on IoMT right now. Apple (Nasdaq: AAPL) has also been a key player in the IoMT space.

Its Apple Watch has multiple health-monitoring abilities. The iPhone has several apps you can use to keep your health data in sync. And some of these apps have a seamless integration with hospitals and doctors’ offices for a complete look at their patients’ health.

With Microsoft now jumping in, it all proves that more money than ever is going to be thrown at this space. Big companies will be competing like crazy with each other.

This Nuance acquisition is just the beginning. It’ll likely be one of many high-profile acquisitions we’ll see … along with many other smaller companies that will find enormous growth in this industry.

In fact, those of you subscribed to Charles’ Lifetime Profits service already know the benefits the IoMT space is creating for the long term. You’re sitting on a 260% gain in Nuance after the acquisition. Nice work!

But if you know me, then you know I tend to focus more on the short term than Charles.

That’s why I’m working on a new research service that specializes in industries such as health care, semiconductors, artificial intelligence and more.

Right now, these industries have massive tailwinds carrying stocks higher. These trends will play out over the coming years, but you can also profit from them in the short term. And my goal is to help you benefit along the way through the short-term mispricings that occur all the time.

Like how Nuance fell 15% ahead of the acquisition. Or how shares plunged 40% during the pandemic. Those are short-term mispricings that don’t last. And we can swoop in and capitalize as the market catches up.

I’ll have more on that in the coming weeks.

In the meantime, Charles has pinpointed another company that should see huge gains from this IoMT shift. And unlike Nuance, this company is still under the radar … for now. Find out how you can get access to his report — and sign up for more of Charles’ updates on this trend — right here. 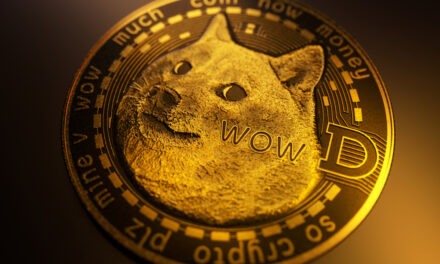