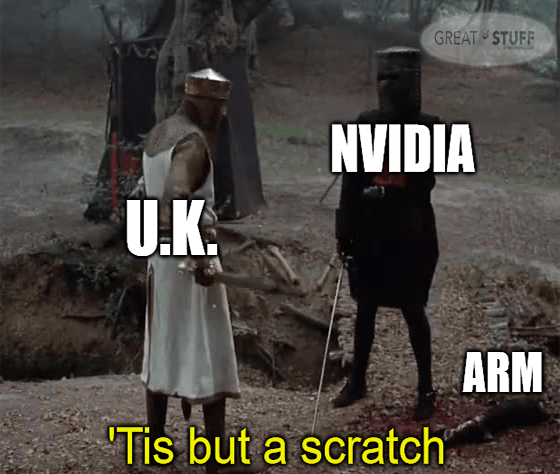 Nvidia Corp. (Nasdaq: NVDA) would buy you a diamond ring, Great Ones, if it makes you feel all right.

It’d get you anything, Great Ones, if it helps investors sleep all right.

But the U.K. don’t care too much for money, for money can’t buy Arm Holdings.

A little Beatles “Can’t Buy Me Love” for your Monday wake-up call? Don’t mind if I do…

So, we all knew Nvidia’s $40 billion Arm Holdings acquisition was a day tripper, but how many of you had “the U.K. goes helter-skelter for national security” on your bingo card?

U.K. Digital Secretary Oliver Dowden intervened in the deal this morning, calling for an investigation into national security implications of Nvidia’s Arm takeover. And Dowden would know … he’s the walrus after all. Or was that Paul? Hmm…

“As a next step and to help me gather the relevant information, the U.K.’s independent competition authority will now prepare a report on the implications of the transaction, which will help inform any further decisions,” Dowden stated.

The move comes after more than 2,000 U.K. business leaders signed a letter calling for Nvidia to get back and stop the merger to preserve U.K. influence and jobs.

Nvidia isn’t overly worried, which is a good sign that the deal could ultimately still come together. This morning, the company stated: “We do not believe that this transaction poses any material national security issues. We will continue to work closely with the British authorities, as we have done since the announcement of this deal.”

But while investors gently weep over today’s development, it’s important to remember that this is but the first step in Nvidia’s long and winding road to acquire Arm. I mean, China is still lurking out there in those strawberry fields, and it’s not too happy about an American company consolidating more power in the semiconductor market.

Nvidia bulls should let it be for now. The company will still be a leader in the semiconductor and artificial intelligence markets even without Arm. So, don’t let this U.K. news make you twist and shout. If you’re holding NVDA shares, you’ve got a ticket to ride … the trip will just take a bit longer now that the U.K. is flexing its muscles.

In fact, any weakness related to the Arm acquisition could even be an NVDA buying opportunity.

Yes, you’re gonna be a star! Mike Carr just released a brand-new video where he reveals how he beat the S&P 500 by a factor of eight last year … using one simple trade at a time.

Better yet, each trade was exactly the same. You can literally place this same trade every week. And it did eight times better than the stock market’s leading benchmark.

The Good: Here Comes The Sun 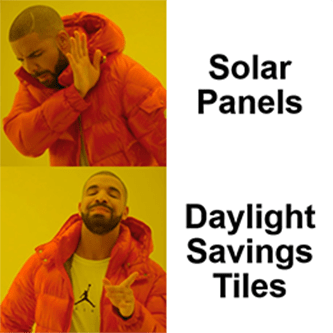 Silicon flowers of silver and gray, towering over your head. Look for the company with the sun in its eyes, and it’s gone … First Solar (Nasdaq: FSLR) in the sky with Citigroup!

Wait, wait … I know this! “Lucy in the Sky With Diamonds?” By The Beatles?

Too right, Great One. First Solar took to the sky today after Citigroup upgraded FSLR to buy and lifted its price target from $88 to $100.

According to Citigroup Analyst J.B. Lowe, there are multiple catalysts ahead for First Solar … including a potential 10-year extension of the Advanced Manufacturing Tax Credit and an extension of import tariffs on Chinese solar panels.

FSLR quickly jumped more than 2% on the report, but gains were held in check ahead of next week’s trip to the earnings confessional. First Solar will release first-quarter results on Thursday, April 29. Analysts expect a profit of $0.97 per share on revenue of $782 million, up sharply from last year’s profit of $0.08 per share and $532 million in sales.

It’s important to remember, however, that year-over-year comparisons are going to be out of whack due to the pandemic. Investors are more likely to focus on First Solar’s outlook instead of prior results.

The Bad: I Don’t Want A Pickle…

I just wanna ride on my bicycle. And Peloton (Nasdaq: PTON) doesn’t want you to die. They just want you to ride on their stationary bi … cycle.

Yeah … I could have gone with Queen since they actually have a bicycle song. But Guthrie’s just this guy … you know?

Anywho, we’re not even talking about motorcycles or even stationary bicycles today. We’re talking treadmills — a medieval torture device that, as a runner, I have a love/hate relationship with. Though, I get the feeling that certain people hate treadmills a lot more this year … especially Peloton treadmills.

The U.S. Consumer Product Safety Commission issued a warning this weekend that people with small children and pets should stop using Peloton treadmills completely after a child died in a treadmill accident.

Peloton, meanwhile, called the Commission’s statement “inaccurate and misleading.” The problem is that it’s unclear exactly how Peloton treadmills are any different from other products on the market. According to Peloton, “the consequences of not following warnings and safety instructions are consistently grave for all motorized treadmills.”

Consistently grave. I’ll remember that the next time my trainer suggests a treadmill for winter running.

PTON, meanwhile, dropped more than 8% today following the Commission’s warning. The stock is once again hovering near support at $100. Given that Peloton hasn’t seen demand slow amid the U.S. economic reopening, I’m willing to bet that a rebound for PTON near $100 is in the cards … assuming the company isn’t forced into a recall, that is.

The Ugly: A Hard Game’s Night 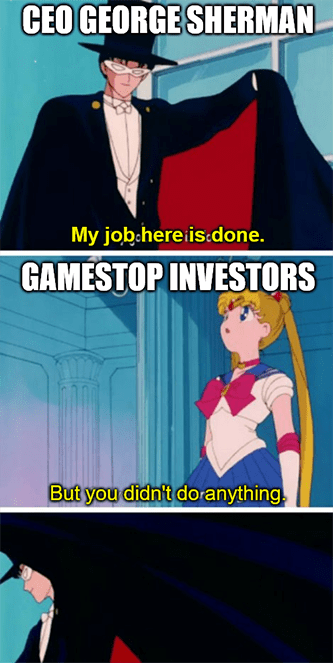 Something in the way GameStop (NYSE: GME) moves … still continues to baffle me. Other stocks would plunge when a CEO departs, but not good ol’ GameStop. With news of CEO George Sherman stepping down by the end of July, GameStop’s executive revolving door continues to, well, revolve … all while GME rips higher.

GME’s up about 8% on the news, so today isn’t flame- and rocket-emoji-worthy in relative Reddit terms. But this isn’t the first time GameStop is fixing a leadership hole this year, with CFO Jim Bell and Chief Customer Officer Frank Hamlin both recently leaving home.

To me, these leadership changes are optimistic (to an extent) because it reaffirms that things are moving in the right direction for GME.

The right direction, presumably, being the same e-commerce space that GameStop’s already flailing in, but I digress.

A management shake-up alone is still not enough to justify GME’s current valuation … which is the real concern for everyone not holding on with diamond hands.

There’s no word yet on who will fill Sherman’s shoes, but I wouldn’t be surprised if Cohen himself leaps into the CEO role to carry that weight.

Great Ones, we’re right back into the thick of earnings season! Last week merely wet the whistle of what’s on the agenda this week.

First comes a barrage of banks, this time followed by an assortment of airlines. But between us, if you catch one, you catch ‘em all … like Pokémon, but with ho-hum earnings announcements. So, here’s what else is slated for this week, straight from Earnings Whispers on Twitter: 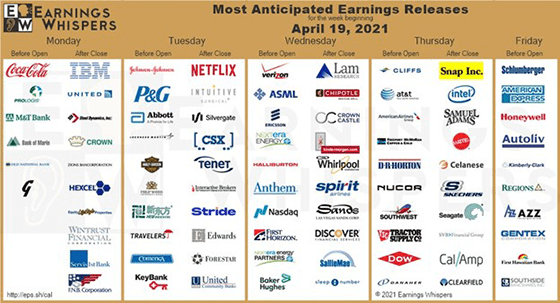 Any of you Great Stuff Picks investors will want to tune in for Intel (Nasdaq: INTC), which should give us another look at the chipmaking chokepoints in the global semiconductor shortage.

There’s also NextEra Energy (NYSE: NEE) for all y’all looking for ways in on the hydrogen market. NEE is already at the power plant level across a few states, so it’s typically a more stable entrant into the earnings confessional. With NextEra constantly snatching up new energy producers (wind energy is its buyout du jour), its reports are always a saga of energy synergies.

Along the same lines, Netflix (Nasdaq: NFLX) has nowhere near the same tailwinds it had this time last year. Netflix already warned that its current subscriber growth won’t outshine its initial pandemic-prompted growth, but Great Ones already know the real scoop on Netflix losing its streaming stranglehold anyway…

One oddball I’m also watching is Intuitive Surgical (Nasdaq: ISRG) — you know, the robot-assisted surgeon people. I’d really like to know how many hospitals are upgrading their robo-surgery suites right now. You’d figure most of that medical tech spending would be spent on the pandemic response, but hey … who doesn’t like robots?

Besides ISRG’s robot surgery and NextEra’s hydrogen sorcery, what reports are you looking out for this week? Any industrials catch your value-investing eye? Drop us a line and let us know at GreatStuffToday@BanyanHill.com. 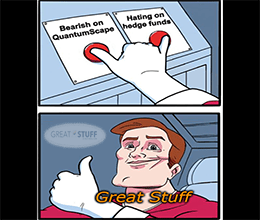 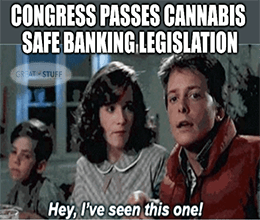