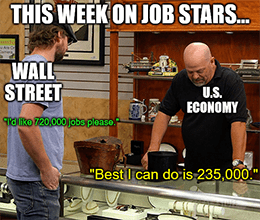 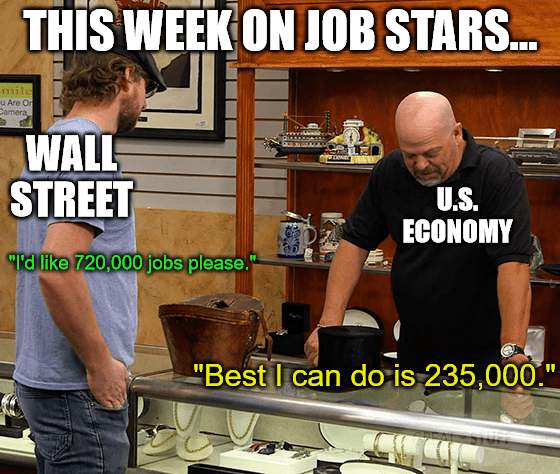 Stock market so willing, the sweet cause in vain. You make jobs, you break jobs. It’s all the same.

Is that … is that “Manic Depression” by Jimi Hendrix? That’s quite a stretch, Mr. Great Stuff…

Yeah, I know … but it was better than the “My Corona” lyrics I was gonna use. So, consider yourselves lucky.

Great Ones, it’s U.S. jobs data time again … and things certainly aren’t looking too swell for Wally and the Beave.

Economists expected the U.S. economy to add 720,000 new jobs in August. What they got was a fraction of that.

According to the Labor Department, the U.S. economy only added 235,000 jobs last month. Can you say: “Ooof!” Sure you can.

Given Wall Street’s reaction (markets awash … lightly … in red), it seems as though many investors were surprised.

But not you, Great Ones. Oh no! You remember my warning about jobs growth from last month, right? The one about the Goldilocks report? Right?!

Sigh. Fine. Here’s what I said:

In fact, I wouldn’t be surprised if this was the last positive jobs report we have for a while. Hold on to your butts, Great Ones, we’re going to find out just how strong this recovery is before the end of 2021.

Now, many people will blame government stimulus for the hiring shortfall. Lazy workers growing fat off those meager stimulus and jobless benefits programs — that’s the real problem! Sure. And if you believe that, I’ve got some oceanfront property in Arizona to sell you.

Some might even raise the “inflation boogeyman” again, claiming that more government stimulus is on the way to help the struggling U.S. economy. It’s not gonna happen … Senator Joe Manchin (D-West Virginia) doesn’t have the stomach for it.

I’ve outlined the biggest risks to U.S. economic recovery before: The Fed, the housing market, China and COVID-19. But we all know the real problem creating this uncertain mess: It’s COVID-19.

Without the pandemic (which is still ongoing, by the way), there’d be more employed Americans. There’d be no need for stimulus. There’d be no massive housing boom, no inflation concerns, no semiconductor shortage, production issues, supply chain issues … this list goes on and on and on.

All of these issues have one central cause, and fixing that cause makes all of this go away … assuming the Fed can safely unwind its easy-money policies, that is.

Agreed. But that will have to wait a bit longer. When all is said and done, the best investing advice I can give you right now for the future of your portfolio, your retirement account or your Robinhood account is to mask up and get vaccinated.

I’ve said this before and offended several of you, but I’ll keep saying it. This isn’t political. I’m not drinking any Kool-Aid or anything. I’m not trying to force anyone to do anything. It’s a free country, and you can do as you please. (Yes, I know I don’t have to tell you that.)

The poor August jobs data is a direct result of COVID-19. And as more aggressive variants spread, this situation will only get worse … thus impacting your ability to make even bigger gains. It seems to me that if you want to make money, the U.S. economy has to gain ground and hire workers.

If you want to learn about a special type of trade that can deposit money into your account in an instant, then go here to sign up for True Options Masters’ 3 Days to $1,000 “INSTANT CASH” Challenge.

There’s zero obligation, plus you get a free trade! 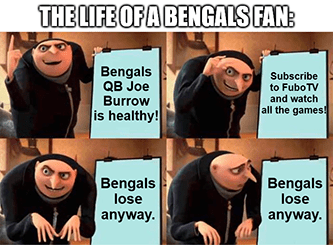 In the interest of fairness, there’s one upside to the pandemic that I’m forever grateful for: the widespread acceptance of remote work.

Now I can answer emails on one screen and obsessively watch my sports bets collapse on another. (Legally, I should tell you I’m kidding. Should.)

But soon, it’s about to get even easier to gamble on random sports you don’t even watch. NFL season? Pssh, I’ve got a parlay bankrolling on this Latvian ping-pong match…

Anyway, FuboTV (NYSE: FUBO) just announced it will offer sports wagering along with its streaming service … if you’re lucky or unlucky enough to live in Arizona. Live bets, right on your TV! What a time to be alive. It’s a limited betting license for right now, but I see the potential for Fubo to dig into other states where sports betting is legal.

The question FUBO investors want to know is: Will it be worth it? There are a couple ways this Sportsbook venture can go for Fubo, and that uncertainty could be why Fubo’s 1% rally lost steam.

Ideally, the sports-betting addition (and maybe addiction) will draw more subscribers to Fubo’s platform — and make more money from each viewer. Presumably, there will be integration with the Fubo app so you can get betting info while you watch a game.

A streaming/sports betting hybrid would be a first for both industries … but what if this doesn’t bring new users to the service?

Fubo’s nowhere close to profitable, even with ad revenue soaring last quarter. Until Fubo’s new Sportsbook fantasy starts to bring in cash, getting this operation off the ground will eat into Fubo’s already sinking earnings.

If Fubo can leverage the data it gets from both streaming and betting, that would be a gold mine — especially if Fubo expands Sportsbook nationwide. But right now, the only betting advantage that Fubo has is that DraftKings hasn’t muscled into the Arizona market … yet.

Streaming is already competitive enough, and Fubo’s finally starting to hold its own ground and bring subs to its sports-specific niche. Now you want to add some competition with the sports-betting crowd? Particularly well-funded, insane-growth competitors like DraftKings?

It’s a bold strategy, Cotton. Let’s see how it plays out for FUBO. 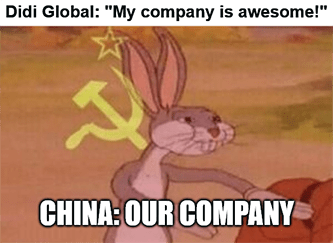 The dog days are done! Can you hear the hoorays? ‘Cause here they come…

OK, maybe I’m getting a little ahead of myself. But Didi Global (NYSE: DIDI) stock is showing signs of life today after flatlining earlier in the summer.

The Chinese ride-hailing renegade rose over 5% this morning on news that Beijing’s municipal government wants to take a stake in the company.

The proposal comes just weeks after China forced Didi to remove its app from stores and restricted any new users from signing up for its platform.

Didi is currently under a cybersecurity review following accusations from the Cyberspace Administration of China that the company illegally collected user data. In case you hadn’t heard, that’s a big no-no in the Middle Kingdom.

While no one knows how much control the Chinese government will have over Didi if the proposal gets approved, the rumor mill still gave DIDI investors hope for brighter days ahead.

With the state stepping in, Didi won’t go out of business anytime soon … completely reversing earlier fears that the Chinese government would shut Didi down (or at least severely limit its growth).

Shares of DIDI stock still trade well below their $14 IPO price, which iron-willed Great Ones could view as a buying opportunity … if you’ve got the stomach to go anywhere near Chinese stocks right now.

Me? I’d down some Pepto along with those delectable DIDI morsels. 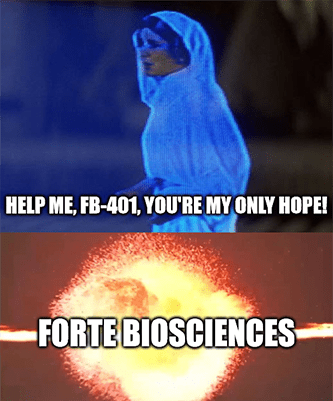 You ever get that weird falling feeling when you go to sleep? As if millions of voices suddenly cried out in terror and were suddenly silenced?

That’s almost how FBRX investors felt opening their accounts today to see the biotech stock down 82%.

Dermatology biotech Forte Biosciences (Nasdaq: FBRX) announced new clinical results for its drug FB-401, which was developed to treat atopic dermatitis. The problem here is that it doesn’t treat anything.

The placebo even worked better than FB-401 in Forte’s latest phase 2 trial. In biotech parlance, the drug “failed to meet a statistical significance,” which translates to: “It. Doesn’t. Work.”

Forte also canceled its next conference calls … presumably to consult the legal beagles on what it can even tell investors at this point:

So … umm, like you know that one drug? The one we founded the whole company on? The one we pitched you when we took the company public so you would give us lots of money? Literally the only product idea we had? Yeah, slight problem there…

Such is the way of biotech investing … is what I’d usually say. I mean, biotech is a volatile, feisty beast with even developed drugmaking plays. But trading a stock with literally only one potentially marketable product that’s not even marketable yet? That’s not biotech investing — that’s just a crapshoot.

You need some kind of fleshed-out and semi-profitable pipeline before you invest — it’s part of a hearty, healthy biotech breakfast. And now, Forte has no pipeline. Nothing. Until it magically pulls a new drug out of the cupboard, Forte’s dead in the biotech waters.

If you were a Forte investor before this … I hope you went in knowing the stock was a complete gamble. Not that there’s anything wrong with that … as long as you’re aware.

If you weren’t a Forte investor before, at least you know there’s literally no reason to get into this stock now. That counts for something … right?

Stop it. Get some help. Just like its only drug and only hope, FBRX stock is dead on the vine. 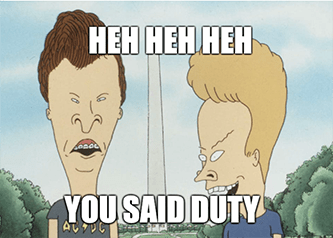 PagerDuty (NYSE: PD) is one of those company names that’s just fun to say out loud … if you happen to share a sense of humor with a six-year-old kid.

Naturally, I had a rip-roaring good time digging into PagerDuty’s earnings today.

This software-as-a-service company is one of those newfangled cloud initiatives that likes to use buzzwords like “human response data” and “software-enabled systems” to describe its business.

For all you Great Ones who don’t speak cloud-computing mumbo jumbo, PagerDuty basically uses machine learning to spot flies in its clients’ digital ointment — think server outages, slow customer response times, etc. Once it detects a problem, PagerDuty then lets its customers know … via pager?

Whatever PagerDuty’s been up to, it’s done a pretty good job of it. PD stock rose 14% in predawn trading hours after beating second-quarter earnings expectations.

In other words, PagerDuty lost money … but it lost less money than Wall Street thought it would. And that’s a good thing … I guess. Yeah, we’ll go with that.

Something, Something … It’s The Weekend!

And a long weekend, too. We will rejoice and be glad in it!

Y’all deserve a break after this long, strange trip of a week … and the Great Stuff Team is chomping at the bit to go start some weekend mischief.

So, we’ll catch you on Tuesday — yes, that’s Tuesday — when the market reopens after Labor Day. But don’t think our fun has to end here. Oh no!

If you’re kicking back this weekend and thinking: “It feels like forever since I wrote into Great Stuff,” well, it probably has been forever. Reach out sometime, won’t ya? There are no strangers ‘round the Great Stuff inbox.

GreatStuffToday@BanyanHill.com. Write to us with your investing questions, concerns, stories, rants and tall tales! (But don’t page me … seriously.)

In the meantime, here’s where you else you can keep up with us all across the interwebs: 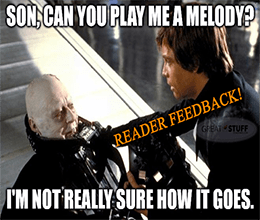 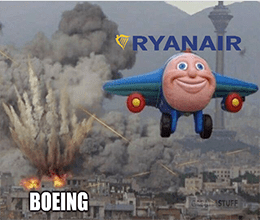