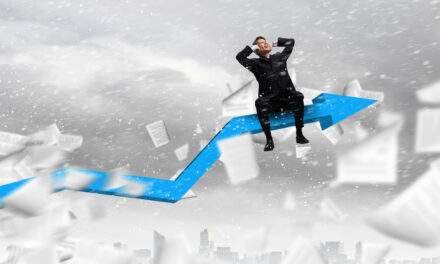 I never saw their track records flash across the TV screen…

But if it was good, they would be touting it.

Forecasters don’t have to be accountable to their past mistakes.

If they were wrong in the past, it doesn’t matter.

And still forecasters make appearances in the financial media and make predictions.

It doesn’t matter if they’ve been dead wrong for the past 10 predictions, there is no accountability.

The media doesn’t care because they fill airtime.

The forecaster doesn’t care because they get a media hit.

And that’s why it boggles my mind that investors take what they say as gospel!

On what planet does that make any sense?

Even more so if you are a long-term investor.

If you see stocks as pieces of a business … does economic news really matter?

You see how current market conditions and forecasts don’t mean much when investing?

All you need to do is buy quality businesses when they are trading at bargain prices.

And here’s the thing that most investors forget…

The worth of a business doesn’t fluctuate every second of the day.

This is especially true with microcaps — stocks with market caps under $500 million.

Companies such as Southwest Airlines, Berkshire and Amgen were all once microcaps.

If you would’ve bought them when they were microcaps, your returns would have been enormous:

That’s why I spend a lot of my time finding future big companies while they are still small.

In a nutshell, here’s why microcaps are often underpriced and offer huge returns.

No. 1: Under Wall Street’s Radar

With large-cap stocks, there are hundreds of analysts reading the same filings.

So it’s hard to have an informational edge.

But I once told a colleague about a microcap company’s 10-K form I’d recently read.

He told me that other than the company’s legal team, he doubted anyone else had read it.

In fact, almost 1 out of 5 microcaps has no analyst coverage.

And that’s because so few investors are investing in them.

But I’m glad many other investors don’t even bother.

Many companies in our Microcap Fortunes portfolio have ONE analyst … and they usually don’t show up to conference calls!

Over time, the stock price follows the fundamentals of the business, not the other way around.

And a lagging stock price gives intelligent investors like us the opportunity to buy great businesses at bargain prices.

When you invest in a company, knowing the track record of the CEO has a huge impact on returns.

Some CEOs are destroyers of shareholder value.

And they don’t allocate capital properly.

But a handful of company leaders are rock stars.

All their companies were once microcaps.

Most of their net worth is tied up in the company.

It’s not just an investment — but a livelihood.

Investing alongside these CEOs when their companies were microcaps would’ve produced outstanding returns.

That’s why we spend a lot of time researching the CEOs of the companies we recommend — especially with microcaps.

I’ve found that the smaller the company, the more impact management has…

Especially this one company I have my eye on.

It’s a leader in a niche area of medical care. It just had a record sales year.

But the cherry on the cake…

The chairman owns 41% of the outstanding shares!

To see the full video I made on this company, click here.

In a merger, two companies combine to create a new company.

In an acquisition, one company becomes the parent company.

In doing so, a company gains more market share, new tech or resources, access to experts and capital.

Since 1992, 86% of all public M&A transactions happened at the small-cap or microcap level: 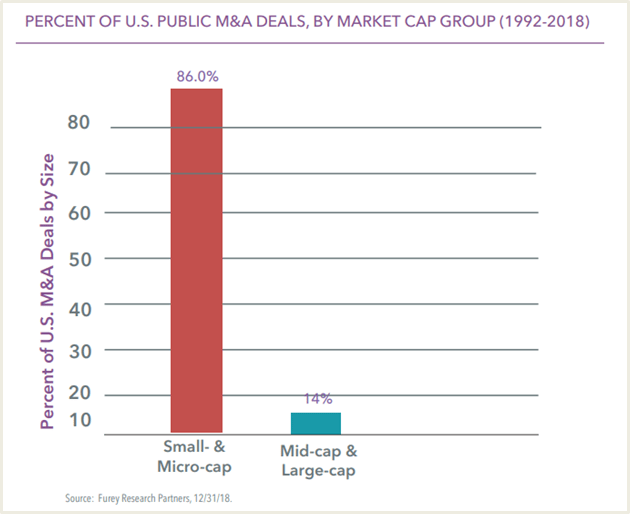 Microcaps are more focused on growth than large-cap companies.

Even if they need to pay a big premium to the stock price.

So in a nutshell, buying microcaps gives us a tremendous profit opportunity.

P.S. The road to making money in microcaps is rocky, there’s no doubt about that.

That’s why I only recommend public companies in growing industries that have growing revenue and are run by experienced CEOs.

That’s just the nature of investing in microcaps.

But the good thing is … we don’t need to be.

Because when you get it right, the gains are big. And they make up for everything else. 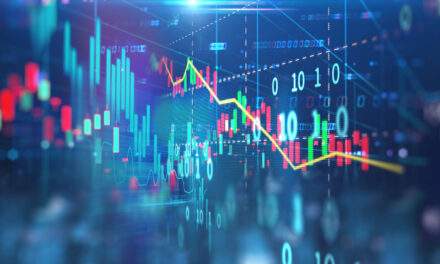