This Critical Deadline Is Why Oil Could Spike to $100

On May 12, the oil market will face a critical test. If the result goes one way, nothing much will change. However, if the results go the other way, we could see higher oil prices … potentially much higher.

You see, May 12 is a crucial deadline for the Iran nuclear deal.

That deal, put in place in 2015, suspended crippling economic sanctions on Iran. In exchange, the country agreed to convert its nuclear weapons program into domestic use. However, if the U.S. pulls out, the economic cuffs go back on Iran’s oil production.

That would lead to higher prices.

Today, all the signs point to President Donald Trump killing the deal. Here’s what that would mean.

A Huge Blow to the World’s Oil Market

A reset of the economic sanctions will cut Iran’s production by roughly 1.7 million barrels per day … which would be a huge blow to the world’s oil market.

The chart below shows the Energy Information Administration (EIA) estimates of the supply and demand balance for the world since 2016: 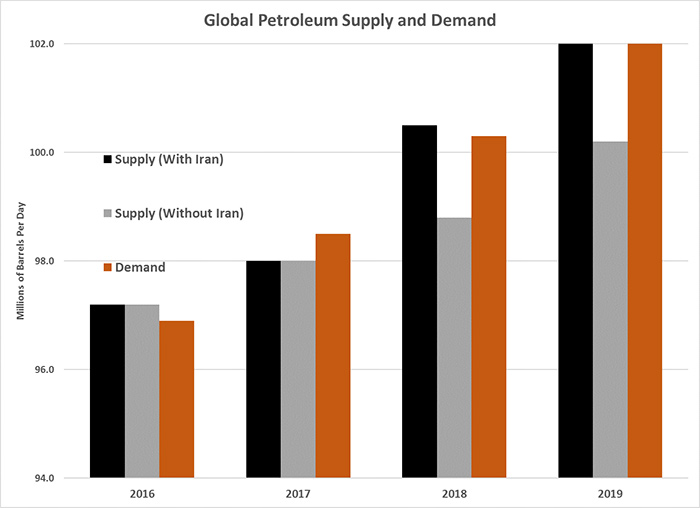 The orange bar is demand, which continues to grow with the global economy. The black bar is the EIA’s estimated supply. However, the gray bar shows what will happen if Iran’s sanctions return.

The result would be a much tighter oil market in 2019. We could easily see much larger price spikes. By 2019, if the economic sanctions return, we could see oil prices back around $100 per barrel. 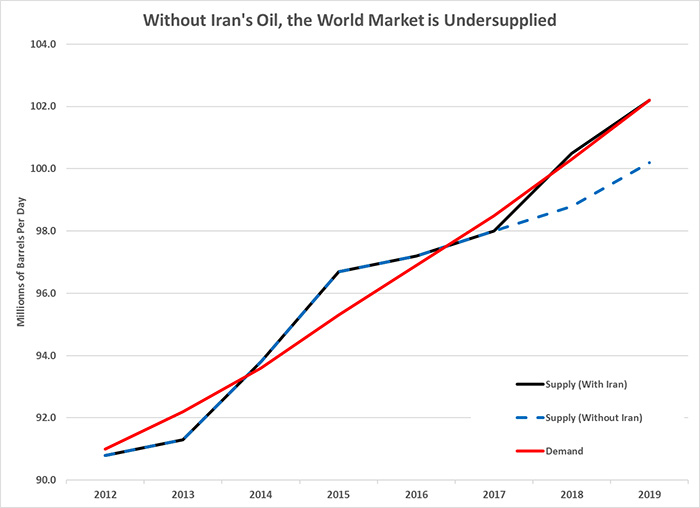 Without Iran’s oil, the market will be tighter than it was in 2012/2013, when oil prices averaged around $100 per barrel. This will be a huge boon for oil companies.

Protect Yourself Against Higher Oil Prices

While this isn’t a guaranteed scenario, investors should hold some oil companies in their portfolio.

However, a simple exchange-traded fund like the SPDR S&P Oil & Gas Exploration & Production ETF (NYSE: XOP) would do just fine. XOP shares are up 15% this month already on the rumors about Iran. If the U.S. pulls out of the deal, it will go much higher.

This speculation is all about offsetting higher prices. If the oil price goes up, it’ll cost us more — more for gasoline, more for services, more for travel. Taking a position in oil right now is a good way to protect yourself against higher prices down the road.

The Oil Industry Launches a Huge Phase of Investment

Invest in Offshore Oil Now Before the Big Money Floods In