How the Experts Turn Small Investments Into Huge Winners

One of the most common investing mistakes people make is in their trade allocations.

Just last week I got a call from an old high school friend named Brian. He was asking me about a penny stock that was rumored to be a takeover target.

The obvious answer to the question above is the first option. No one wants one of their large investments to become a small one.

I can show you how an allocation of as little as 2% can still have a big impact on the total return of a portfolio. But you have to have patience and discipline. You also have to be willing to take some total losses if you are going to have really big winners.

To show you how this can work, I put together the following table. The table shows how you can take 2% allocations from a $50,000 portfolio and make a great return. You can even have three 100% losses and two 50% losses, and still enjoy great overall returns. 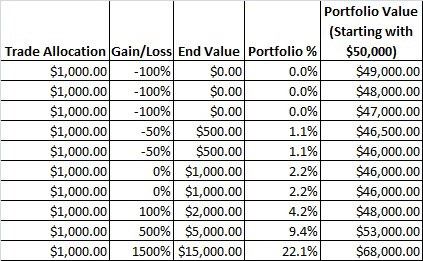 After all is said and done, the portfolio gained 36% with only three winning trades out of 10.

We also only used 20% of the total portfolio value to make these trades. We could repeat this same pattern four more times.

By making small allocations, we limit the downside. But there is unlimited upside.

You may be saying: “1,500% gains don’t happen very often.” And you would be right, they don’t. You have to be patient and disciplined.

As an example, let’s look at a stock that Paul and I have both traded and recommended over the past seven years or so, the Federal National Mortgage Association (OTC: FNMA). It is better known as Fannie Mae.

The stock was languishing between 20 cents and 41 cents for over a year back in 2012 and early 2013. But after the company reported $50 billion in profits in March 2013, the stock jumped sharply higher. 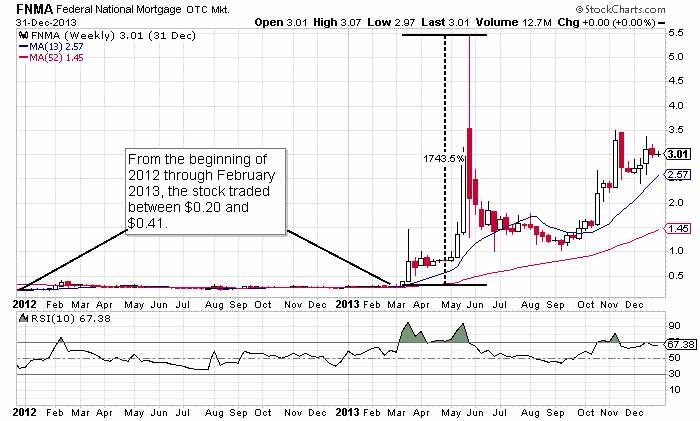 Too many investors want home run trades, but don’t have the patience and discipline to actually achieve them. They get tired of waiting, or they see the stock jump by 100% or 200% and sell it before it has had the chance for the big move.

If this trade would have been in the sample portfolio above, a 2% allocation would now be worth approximately 25% of the portfolio. That is using the 1,700% gain to replace the 1,500% gain above.

I used to write a newsletter for penny stock investors. All of the stocks had to be under $10 and listed on an exchange. Those were the only two requirements the publisher gave me.

I looked back at the track record recently, and there were so many 200% to 300% winners.

There was one 15-trade stretch where six of the recommendations reached at least 200% gains, three of the six reached 300% and two of them were close to 400%.

However, I doubt if any subscribers actually achieved those gains.

Why? Because they weren’t willing to wait for them. I doubt they had the patience or discipline to wait.

A New Service for a New Approach: The $10 Million Portfolio

Now that I have told you about this downside-up approach to investing, I want to tell you about a new service that Paul and I are running. It isn’t fully launched yet, but it will be soon.

We are going to use our combined talents and experience to run the service, and we are going to use the methodology described above to help guide investors. We are going to suggest small allocations to aggressive trades that will take patience and discipline. But we expect the rewards to be huge.

The service is called The $10 Million Portfolio. We call it that because our goal is to help subscribers grow their portfolios from $10,000 to $10 million.

And hopefully we can change the way investors think when it comes to home run trades. We want to teach investors how to take small allocations and turn them into large portions of their portfolios.

Perhaps having two guys with over 50 years of combined investment experience will help change the way investors think.

We are all looking forward to the launch, and we can’t wait to help readers make money. But we all have to be patient.

Insiders Are Your Guides to Stock Market Riches

3 Tips for Finding a Professional Stock Trader to Follow